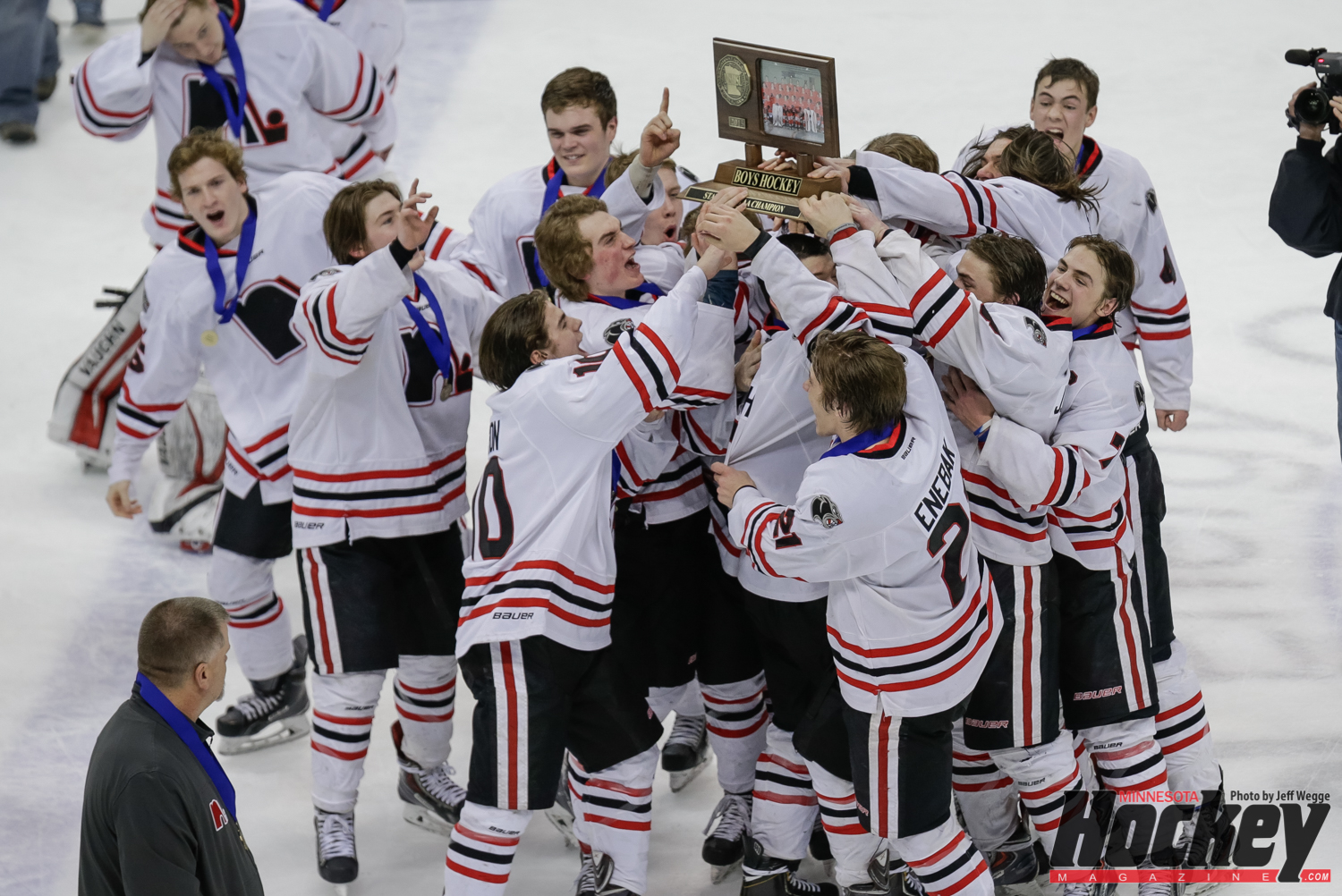 The undefeated Lakeville North Panthers raise their state championship trophy after a 4-1 win over Duluth East in the Class 2A championship game on Saturday night at Xcel Energy Center. (MHM Photo / Jeff Wegge)

St. Paul — Before every game this season, both Lakeville North goaltender Ryan Edquist and defenseman Jack McNeely took a photo of themselves using the social media application Snapchat, always captioning their photo with “business trip” as they traveled on the bus to each game.

What started out as something fun turned into a superstition for the two teammates who realized the seriousness of their photo caption.

The Panthers had unfinished business to take care of following a state final loss to Edina in 2014, and now a year later after taking a trip of 31 victories with no losses, Lakeville North finished its business.

The Panthers capped off an impeccable season with a 4-1 victory over the Duluth East Greyhounds in the 2015 Class AA state championship at the Xcel Energy Center, Saturday night. Finishing 31-0, Lakeville North is the first team to win a state championship after going undefeated since the 1992-1993 Bloomington Jefferson Jaguars.

When Edquist joined the team before the start of the season after leaving Shattuck-St. Mary’s, the mandate from his new teammates was clear.

“I could tell right away when I got here, met the guys, that they had one goal in mind and it was to come back in this game and win it and that’s what we ended up doing,” Edquist said. “Right when I came into the program, they had it in mind that we were going to win it this year; we had the talent and we had the hard work ethic.”

In the state championship game, this hard work ethic showed from puck drop. The Panthers got off to a quick start as they out-skated the Greyhounds and asserted a physical level of play. While most of the team brought this high level of compete early, the most impressive performance was that of sophomore forward Ryan Poehling. 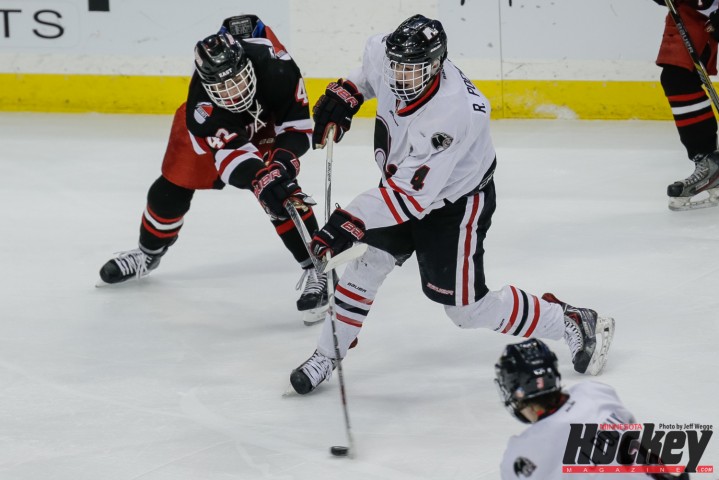 The youngest of the Poehling-trio fought a sickness all tournament long as Lakeville North head coach Trent Eigner said Ryan had been “sicker than a dog.” While the future St. Cloud State Husky struggled with illness throughout the week, he didn’t struggle to provide a spark for his team in the state title game.

Ryan Poehling took a pass from his brother Nick in the slot and fired the puck just past Greyhound goaltender Gunnar Howg’s glove to give the Panthers a 1-0 lead with 4:27 left in the first period.

Even though the youngest Poehling really had nothing left to provide for his team as sick as he was, his coach wasn’t surprised he still came up big on the biggest of stages.

“There’s a part of me that expects Ryan will always come up with something special,” Eigner said. “His tank was empty last night. The fact that he could come out and provide that kind of energy tonight was awesome.”

In the second period, the high-speed Panther offense continued right where it left off. Not even  two minutes into the second, a Poehling struck again when Jack scored his 38th goal of the season.

As Lakeville North found success in the offensive zone, the Panther defense continued to stifle the Duluth East offense throughout the game. Even when the Greyhounds had a one man advantage, they couldn’t get the puck on net mostly due to the play of defender Jack Sadek.

Sadek often displayed a calm confidence, continuously clearing the puck, and intimidating Duluth East at the blue line and in the neutral zone. After registering only one shot in the first period, the Greyhounds only mustered 13 shots on net through three periods.

After a goal from 2015 Herb Brooks award winner Angelo Altavilla in the third, Duluth East wasn’t about to give in just yet. Junior forward Ryan Peterson put the puck past Edquist on the power play to narrow the scoring gap to 3-1 at 11:21 of the third period. 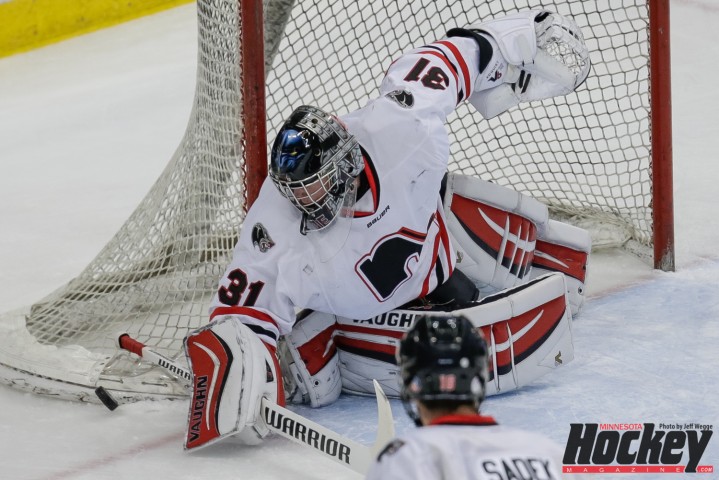 The Greyhounds are no strangers to coming back from a three-goal deficit, but Edquist wasn’t about to hit the panic button after giving up his only goal of the game and only his fourth goal of the tournament.

“We all know what they did the last [couple games],” Edquist said. “I had confidence in my teammates who have been able to hold onto leads.”

While Edquist wasn’t worried, the Greyhounds believed that that goal would be the one to spark a late game comeback.

“The whole game we knew we had a shot of coming back but we knew we needed to put one in first just to get it going and that was our goal,” Greyhounds’ senior forward Nick Altmann said. “So after that one went in we just started thinking ‘OK, we can do this, we can do this, we just need to get another one and we’ll get the energy back,’ but it just didn’t happen.”

Duluth East has recent experience coming back down three twice against the St. Thomas Academy Cadets in the quarterfinals and Elk River in the section championship, so there wasn’t a doubt that it could be done. But Greyhounds coach Mike Randolph believed it was too late in the game to muster another triumphant comeback.

“That’s what I was waiting for,” Randolph quipped about his team falling behind by three. “We should have done it a little earlier and we might have had a little more time.”

An empty-netter from Nick Poehling ended Duluth East’s comeback attempt, ultimately giving Lakeville North its first boys’ hockey state championship in school history. For Randolph, the coach of the Greyhounds for the past 27 years, he had nothing but respect for the Panthers squad following the loss.

Winning the state championship involves mixed-emotions for the Panthers because of the senior class that is leaving including Sadek, Jack and Nick Poehling, McNeely, and Altavilla. But ending a high school career with a state championship victory is a best-case scenario for Jack Poehling.

“To leave as a senior with a state championship win, there’s nothing better,” Jack Poehling said. “At the end of the day, I don’t know how you can be sad leaving like this.”