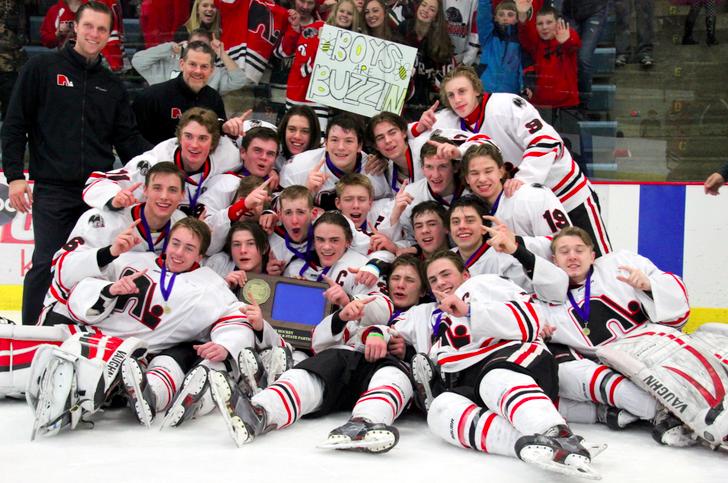 ROCHESTER – With six future Division-I hockey players, the Lakeville North boys’ hockey team has no shortage of talent. But even with a star-studded lineup that includes the three Poehling brothers, it wasn’t a senior DI commit who led the Panthers back to their third consecutive title appearance.

But instead it was sophomore wing Henry Enebak.

Enebak scored three goals to lead the Panthers to a 6-1 victory over the Farmington Tigers in the Section 1AA final at the Rochester Recreational Center on Thursday night. Lakeville North returns for its third straight trip to the Xcel Energy Center where they look to avenge a state final loss to Edina.

After scoring a goal in the first period, Enebak shut the door on the Tigers’ hopes of a comeback in the third when he scored two goals. Even though Farmington trailed by a three point margin, their fans didn’t show it. But when Enebak lit the lamp twice just minutes apart, he silenced the electrified Tiger crowd.

Enebak and the team knew a fast start in the final period would provide a state tournament berth.

“We were in the locker room between the second and third and we knew we needed to do something to take their energy away,” Enebak said. “We knew it was going to be tough and they were going to come out on all cylinders so it was big to get [the goals].”

It wasn’t just the third period that the Panthers came out firing on all cylinders. Lakeville North’s offensive attack asserted itself early when senior forward Nick Poehling started off the scoring as he sped down the ice and rocketed the puck into the Farmington net from just outside the circle.

Despite a goal from the Tigers in the first 30 seconds of the second period, Lakeville North didn’t lose focus on their ultimate goal. Jack Poehling tallied two goals and combined with Enebak’s hat trick performance, the Panther offensive firepower proved too much for Farmington.

Now headed back to the Xcel Energy Center for ‘the Tourney’, the Panthers aren’t about to let their number one ranking get to their heads as they look to win their first state championship in school history.

“They have a great appreciation of where we’ve come from,” Lakeville North head coach Trent Eigner said. “I don’t think they take anything for granted. Our juniors and seniors especially have put in a lot of time and effort to get our team to this point and they take a lot of pride in our effort on a nightly basis.”