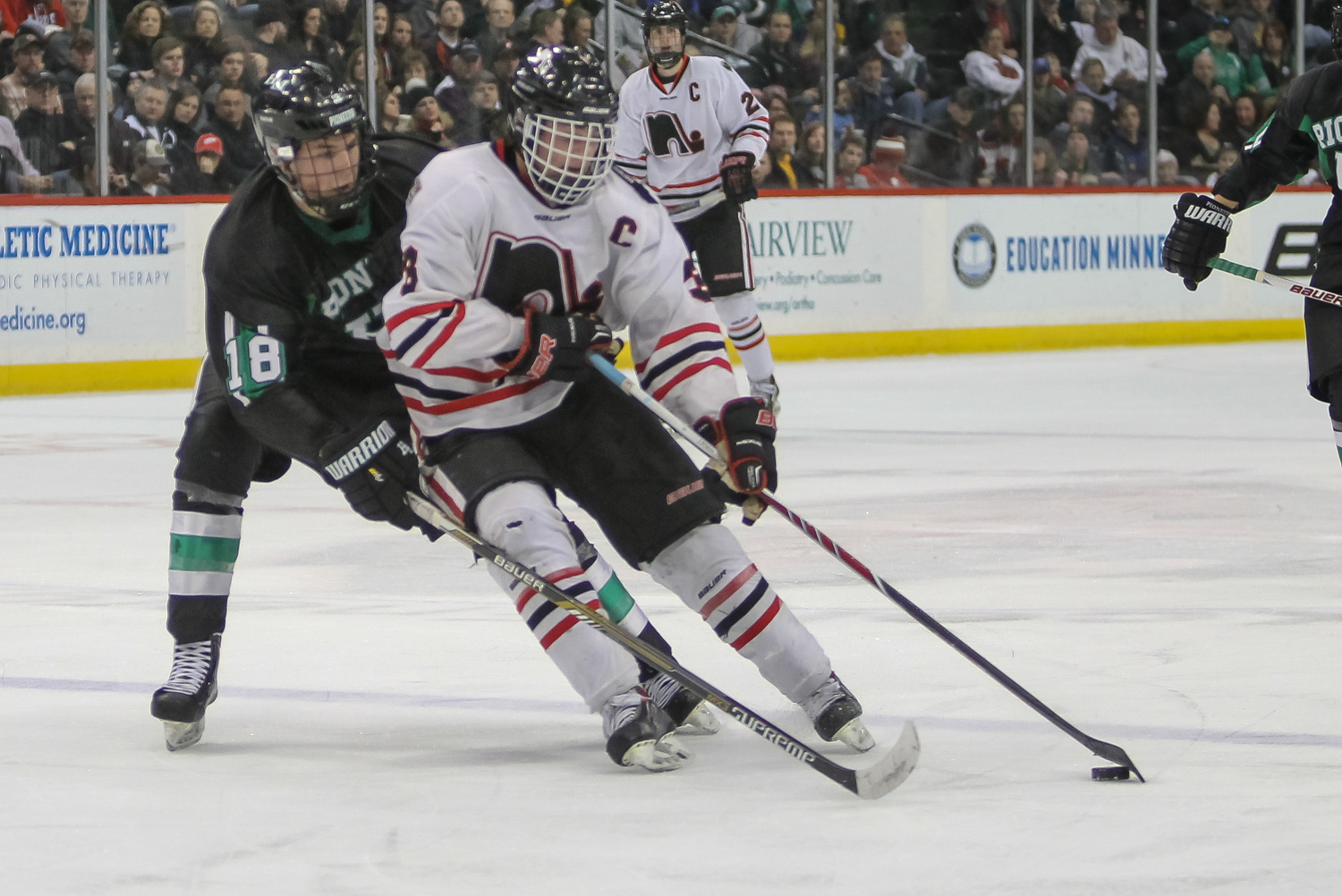 St. Paul — Having been twice denied at close range in each of the first two periods, the third time was the charm for Jack Poehling. In fact, so was the fourth.

The Lakeville North senior forward netted a pair of goals 3:55 apart late in the second period to break open a tie game and propel the Panthers back to the Class 2A semifinals with a 4-1 win over Hill-Murray on Thursday night at Xcel Energy Center.

“I just kept firing away and hoping one went in, eventually I got two,” Poehling said. “At the end of the day, we just play our hockey and what happens happens.”

Harry Enebak chipped in a goal and an assist for the Panthers (28-0-0) while Taylor Schneider added a pair of assists. Lakeville North junior goaltender Ryan Edquist earned the win with 16 saves.

The top-seeded Panthers will face the winner of Thursday’s late game featuring Blaine taking on Eden Prairie at 8 p.m. on Friday.

With the game tied 1-1 and a faceoff in the neutral zone, Poehling shoved the puck forward off the draw, retrieved it and side-stepped Hill-Murray’s Jacob Olson before depositing a backhand shot past Pioneers’ goaltender Jack Begley at 16:07. Begley finished the night with 25 saves.

Poehling made it 3-1 with 58 seconds to go in the middle frame scoring his 36th of the season with assists from brothers Nick and Ryan.

Hill-Murray (21-7-0) attempted to slow the Panthers attack with a defensive game plan designed to capitalize on special teams and Lakeville North mistakes. But Eigner said it wasn’t anything his team hadn’t seen before or prepared for.

“I think our guys are more than accustomed to it, we expect to see it from time to time,” Lakeville North coach Trent Eigner said. “I was very impressed with our discipline and our patience in just continuing to maintain, you know, our style of play we wanted to try and dictate.”

Jack Poehling nearly opened the scoring at 3:32 of the first period but his short-range wrister was gobbled up by Begley who came way out to challenge the Panthers’ star.

But on the ensuing faceoff, Lakeville North’s Schneider’s was stopped by Begley but the rebound came right to junior Max Johnson who fired into an open net for his 18th of the season and a 1-0 Panthers lead.

The Pioneers drew even at 11:18 when Olson scored his ninth of the year into a similarly open net. Teammate Rickey Zellmer’s failed wraparound attempt sailed cross-crease to Olson and his shot from near the left post beat a sprawling Edquist who had no chance to recover in time.

Enebak closed the scoring picking up his 22nd of the season with 3:03 to play.

The game marked the second meeting between the two metro powers who faced off at Aldrich Arena on Dec. 23. The Panthers opened up a 3-1 lead in that game before hanging on for a 4-3 win behind Nick Poehling’s hat trick.

But Lakeville North was not about to allow another Hill-Murray comeback.

“Obviously, after two periods of this one, we fully understood what that team was capable of,” Eigner said. “So I thought our preparation for the third was great.”