Path to success is unique for Nebraska Omaha’s Josh Archibald

Path to success is unique for Nebraska Omaha’s Josh Archibald 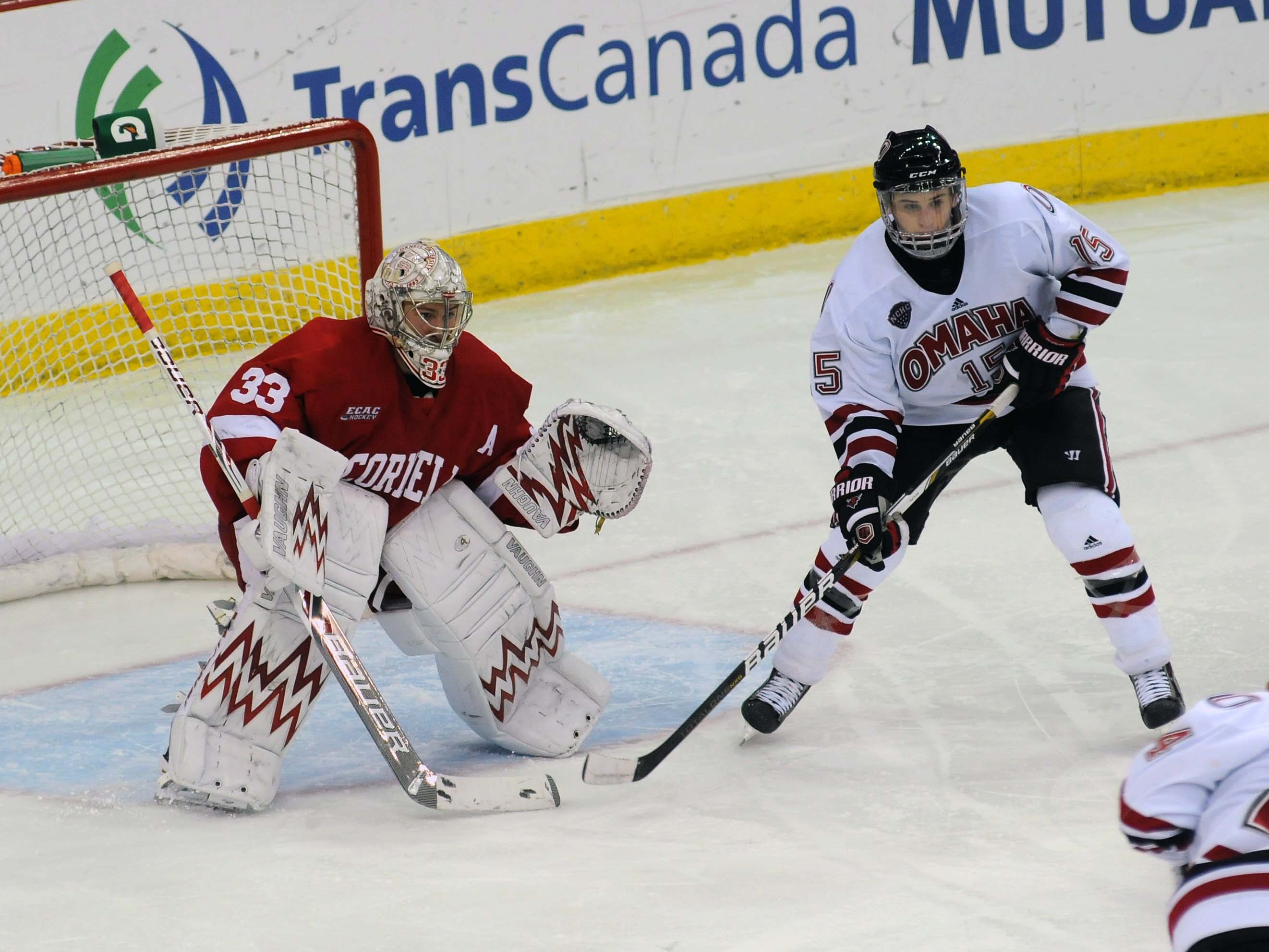 Featured Image:
Nebraska Omaha’s Josh Archibald sets up in front of the Cornell net in the Mavericks’ Oct. 25 game vs. the Big Red.
(MHM Photo/Jordan Doffing)

Some people have a knack for finding their own path to success, steering clear of the norm and defying expectations. Josh Archibald is one of these people.

Although it hasn’t always been by design, it’s hard to argue with the results to this point for the University of Nebraska Omaha forward. The junior who hails from Brainerd, Minnesota via Canada, is likely to find his way to the NHL as well but it’s the route to his ultimate destination which, if history is any indication, will surely be fascinating to watch.

The 5’11”, 176 pound Archibald is on a tear this season for the Mavericks. On Saturday night against North Dakota, he notched his second hat trick in two weeks in UNO’s come-from-behind 6-3 win over UND to vault himself to the top of the National Collegiate Hockey Conference’s leaderboard with 21 goals. His 32 overall points trail only Miami’s Riley Barber (36) and Austin Czarnik (34) for the season.

The goals were No.’s 48, 49 and 50 of his career behind only Scott Parse (79), David Brisson (65), Jeff Hoggan (61), Brandon Scero (55) and Mick Lawrence (51) for sixth on Nebraska Omaha’s all-time list. Should Archibald return for his senior season, Parse’s team record is well within range.

Archibald had no idea he had reached the 50-goal plateau until he was congratulated by a teammate and he says he doesn’t get caught up in personal milestones.

“I’m more about the team, I’d rather see us go as far as the NCAA tournament and do well there,” Archibald said. “But it’s pretty cool to be included in an elite club like that and I’m pretty honored to be able to be up there with everybody.”

Unfortunately for UNO coach Dean Blais, a first-period ejection for the former North Dakota coach sent him to, of all places, the Zamboni room where he watched Archibald’s natural hat trick on television. Blais, on the other hand, doesn’t need to witness Archibald’s abilities firsthand to appreciate the tools he possesses.

Archibald is not the first in his family to be coached by Blais as his father, Jim Archibald, played under Blais (1981-85) when the latter served as an assistant to then North Dakota coach Gino Gasparini. While the elder Archibald is UND’s all-time leader in career penalties (247) and career penalty minutes (540), which remains an NCAA record this day, he too demonstrated a penchant for scoring.

“Jimmy was either taking a penalty or scoring a goal,” Blais recalled of the sixth-year coach at Brainerd High School where he has a .711 winning percentage (96-39-0). “In today’s game you can’t play like that anymore, you’d be in [the penalty box] all night long or they’d kick you out of hockey.”

Archibald says he’s seen plenty of video of his dad from his playing days and is familiar with his tough-guy rep and penalty record.

“But if you look at my dad’s stats, too, I think he had thirty-some goals his senior year, so he was either getting a penalty or scoring goals,” Archibald said. “I think a little bit of both rubbed off on me, you know, I can put the puck in the net when I get chances and also go in the corners and muck and grind if I have to.”

For Archibald, picking up a hat trick in a hostile environment like Grand Forks was satisfying but he said he didn’t view it as a chance rub his dad’s face in the fact he netted three against his alma mater.

“He’s pretty supportive about anything I do and he was happy that we won too,” Achibald revealed about his father who played 16 games over three seasons (1984-87) with the Minnesota North Stars who selected him in the seventh round (No. 139 overall) in the 1981 NHL Draft. “He’s a true UND fan and everything but, when it comes to me, he’s always on my side no matter what.”

Blais says Josh is a lot like his father in his game preparation and the way he plays with his speed.

“Josh is an intense player that is fast like his dad was but Josh is, I think, a little bit faster from a standstill,” Blais said. “When he gets going he can beat you to the outside and make things happen.”

Fellow junior forward Dominic Zombo says his teammate, linemate and roommate possesses what he likes to refer to as “dynamic” speed.

“He can take sort of a nothing play and use his speed to take someone wide and make something happen at the net and that’s a huge threat,” Zombo said. “Teams have to be aware that his speed is a huge factor and helps us out a lot.”

Not only did Josh’s father attend North Dakota, his mother Anne went to UND where she competed as a swimmer. Given that fact, UND would certainly benefit from a subtle, or not so subtle, nudge from mom and dad in recruiting, right?

Not so fast, this is Josh Archibald and his is not the beaten path. But he says his parents never pressured him toward the relatively short drive to Grand Forks and that Nebraska Omaha’s “smaller atmosphere for being such a big school” influenced his decision.

“They were behind me no matter where I went and they were just happy that I got the opportunity to play for a Division I college hockey team,” Archibald said. “I think one of my main things was my dad had such great things to say about coach Blais. I wanted to get the best coaching experience I could possibly get and I think coming to UNO and having Blais as a coach was one of the factors.”

“He’s awful proud of the tradition up at North Dakota and North Dakota was one of the schools, along with Duluth, that he was considering,” Blais said. “He just felt more comfortable, I think, at Omaha; he thought Omaha was maybe a better fit for him at the time.” 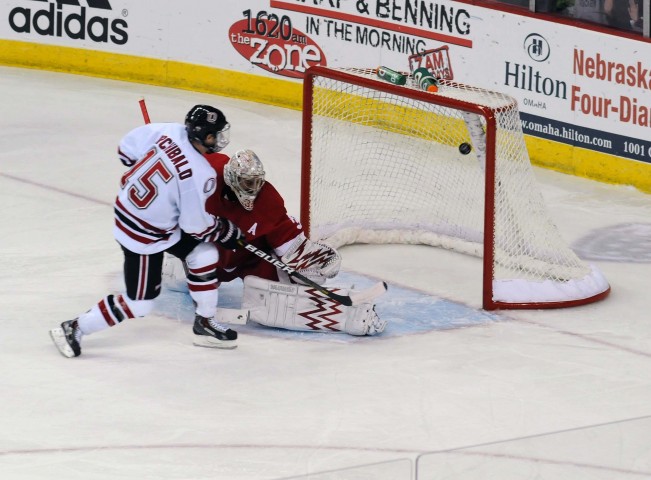 Archibald is somewhat of a rarity in college hockey in that he made the jump straight from high school to Division I and found himself a boy among men who, like him, were freshmen but had spent a year or two experiencing the rigors of a junior hockey schedule. Zombo enrolled at UNO with Archibald, but as a freshman who had taken the junior hockey rout. He said the difference was noticeable.

“It’s safe to say he was definitely younger and maybe not as mature as some of us coming in,” Zombo said. “When he came in he was still pretty much just like a kid … but he’s just grown into that college game and grown up really fast.”

“Coming in here as a freshman, I was 17, 18 years old and now just being older and more mature, I got bigger and I’d like to think I got a little bit smarter.”

Zombo and Archibald spent a short time at the end of their freshman year skating together but their on-ice chemistry blossomed as sophomores with the two spending the entire season on the same line. Now as roommates, the college buddies have forged a friendship sure to extend long after they leave the UNO campus.

“It’s definitely a friendship that I’m going to take to my grave and will never forget about it,” Archibald said. “He’ll be one of my best friends throughout the rest of my life.”

Drafted by Muskegon of the USHL, Archibald had the option to spend his senior year playing junior hockey. But he says being a standout senior playing for his father better served his development than a season as an average USHL player.

“Not to take anything away from USHL coaches or that league or anything but, for me, I just felt like being able to stay home in Minnesota and play in the [Upper Midwest High School] Elite League in the fall and play for my high school would benefit me a little bit more than going to the USHL and maybe playing on a third line.”

Not only did he spurn the USHL, unlike many of the state’s elite players in recent years, he couldn’t even say it was due to a desire to play with the friends he grew up with much like many of the star senior players so often do. He was born in and grew up outside of Regina, Saskatchewan where he played all of his youth or, as they say in Canada, minor hockey and only played his high school hockey in Minnesota.

Despite not being listed among the 210 North American skaters included in NHL Central Scouting’s final rankings as a senior, Archibald again found the road less traveled to his liking when he was selected in the sixth round (174th overall) by the Pittsburgh Penguins in the 2011 NHL Draft.

Fortunately for Archibald, he had a well-respected advocate right in his back yard. Chuck Grillo, owner of Minnesota Hockey Camps in nearby Nisswa, had the opportunity to observe Archibald regularly in his position as an amateur scout for the Penguins and clearly had Pens GM Ray Shero’s ear.

“He called me on draft day and it was right when they were going to select me and he basically just said, ‘How would you feel being a Pittsburgh Penguin?’” Archibald recounted. “He just held up the phone and they announced my name.

“It was a surreal moment for me and definitely a dream come true.”

Blais is confident, with another year to mature and some added bulk to his frame to allow him to endure the 82-game NHL schedule, Archibald will be ready to step into the Pittsburgh lineup following his senior season.

“When he signs he’ll be ready, they’ll put a uniform on him and he’ll play the game,” Blais said.