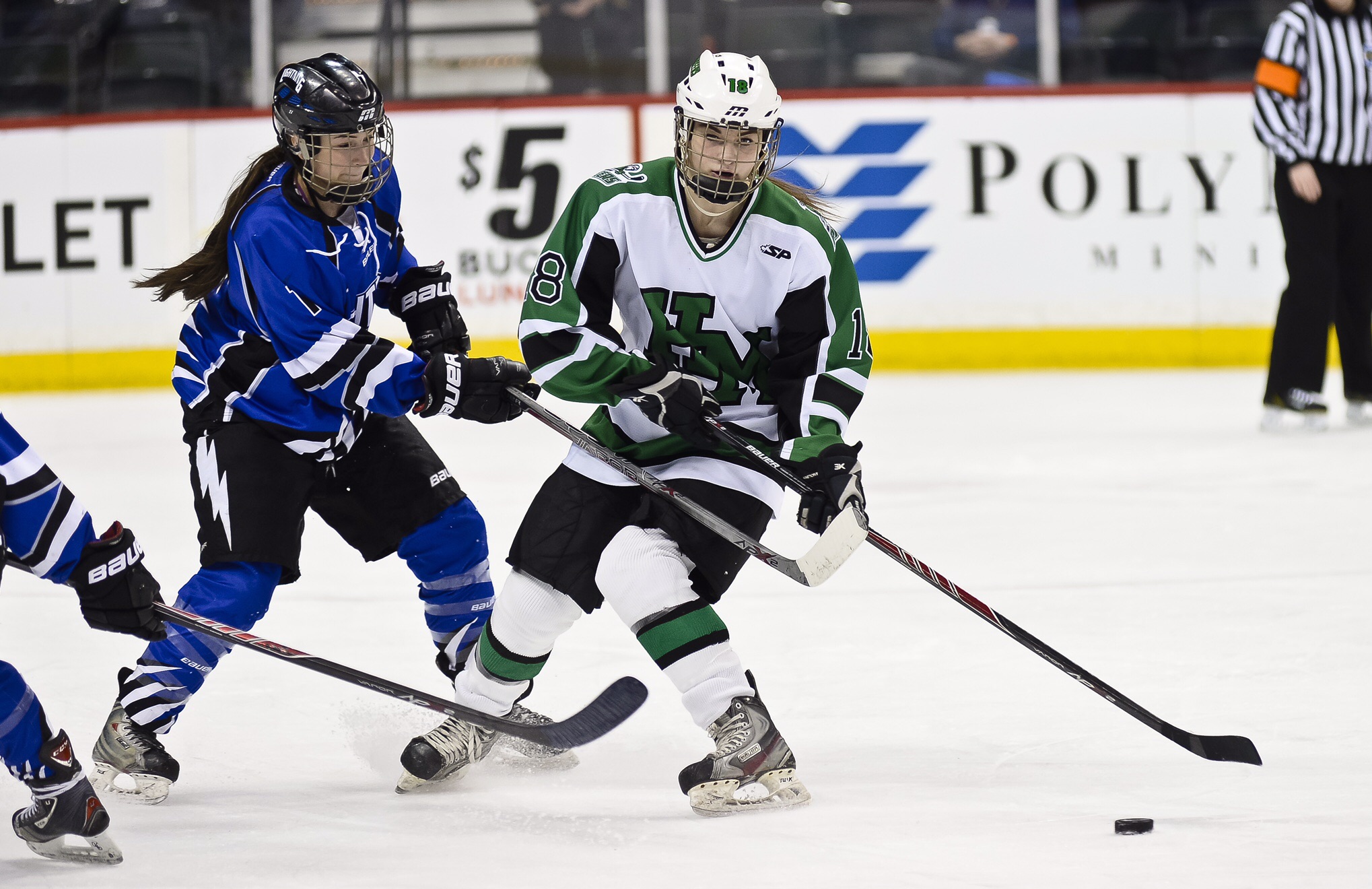 SAINT PAUL ­– No player on the Eastview Lightning girls’ hockey team has ever played in the state tournament, so the reigning state champion Hill-Murray Pioneers made sure to show them what “the Tourney” is all about.

The Pioneers welcomed the Lightning to State with a 6-1 victory in the Class 2A State quarterfinal at the Xcel Energy Center on Thursday afternoon. With the win, second seeded Hill-Murray will play the winner of the Edina-Buffalo game, on Friday in the state semifinals.

The shock of playing at the Xcel Energy Center can often intimidate teams, so Hill-Murray coach Bill Schafhauser tried to ensure the atmosphere didn’t overwhelm his team as it may have affected Eastview.

“To reign in the level of focus you need in the first game, it’s not easy,” Schafhauser said. “Sometimes we tend to forget they’re kids.”

The Pioneer offense found early success in the offensive zone with 13 shots in the first period, but the Pioneer defense also suffocated the Eastview offensive attack. With little opportunity to fire on the Pioneer net, the Lightning didn’t register their first shot until almost nine minutes into the game.

Part of this success was because of Hill-Murray’s familiarity with Eastview star forward Natalie Snodgrass. Pioneer defender Mekenzie Steffen is a teammate of Snodgrass’ on a U-18 team, and Steffen made sure to give her team insight on the Lightning forward.

“We knew that Natalie Snodgrass was one of their top scorers so we made sure to watch her all game and I think we did a great job,” Pioneer forward Laura Anderson said.

While the Pioneers held Snodgrass and the Lightning attack to only one goal, they found little trouble finding the Eastview net. Pioneer Lexi Klein opened the scoring as she took the pass from teammate Kate Smith and buried the puck right past the shoulder of Eastview goaltender Kaitlyn Pellicci and gave the Pioneers their first of six goals.

With a 6-1 victory to start the tournament, the Pioneers feel their dominance has impeccable timing.

“I think we’re peaking at the right time and everything is going well,” Anderson said.