Pioneers Reach Top of the Hill 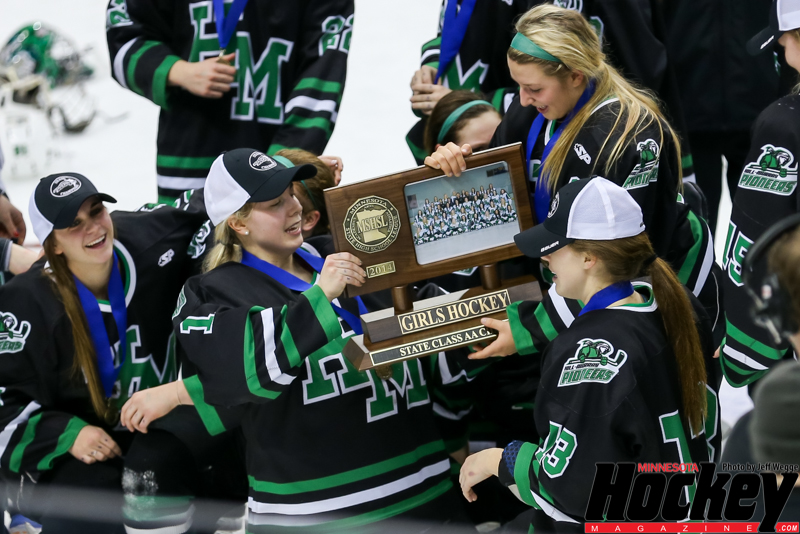 SAINT PAUL—The ticket to the Class AA Minnesota State Girls’ Hockey Tournament for Hill-Murray and Benilde-St. Margaret’s was the right combination of dynamic offense and suffocating defense. The Pioneers (95) and the Red Knights (93) arrived in St.  Paul sporting the highest goals scored/goals against differentials among the tournament’s eight participants, putting them on a collision course for the title game.

The matchup between the two private school powers, one from east of the Mississippi and the other from the west, did not disappoint. But Hill-Murray, on the strength of balanced scoring and great goaltending, defeated the Red Knights 5-3 on Saturday night at Xcel Energy Center to earn its first-ever girls’ state hockey championship.

“I was really, really pleased with the way we played,” Hill-Murray coach Bill Schafhauser said. “Benilde’s an awesome team, obviously, and we knew we had to be our best tonight and I think we were.

“We saved the best for last this weekend which I think was awesome.”

Goaltender Leah Patrick was outstanding for Hill-Murray in a 23-save effort, stopping several Benilde grade-A scoring opportunities in the process. The Pioneers, the 2013 state tournament runner-up, went three lines deep on the scoresheet and got a pair of goals from Jess Bonfe along with two points from Sarah Bobrowski (1-1–2).

“If we had an unsung or breakthrough type of player this year, it would be Leah,” Schafhauser said. “It’s a neat process to witness a s a coach to have a goaltender win over a team and get their confidence and she did great.”

Benilde senior Kelly Pannek scored all three of the Red Knights’ goals and finished with seven goals and four assists for the tournament. The 11 points give the University of Minnesota commit 99 for the season (41-58-99). Abigail Miller turned aside 17 of 22 Hill-Murray shots for Benilde-St. Margaret’s.

“I’m glad I could play well, but I would have traded that for a win here today,” a disappointed Pannek said after the game.

Hill-Murray jumped out to a two-goal lead as Bonfe scored twice before the game was 10 minutes old, the first one coming at just the 1:17 mark, and the Pioneers led the rest of the way.

“We just got off to a bad start,” Benilde-St. Margaret’s coach David Herbst said. “We kept battling but when you dig yourself a hole like that it’s tough to get out, especially in the state tournament.”

It took the Red Knights less than two minutes to bounce back from Bonfe’s second goal and trimmed the deficit to one when Brittany Wheeler’s shot from the left circle handcuffed Patrick and, for the second time in as many nights, Pannek pounced on a loose puck in the crease to get Benilde on the board.

The Pioneers maintained that 2-1 lead entering a second period which saw them pull away as Hill-Murray extended its lead on Jac Kaasa’s goal a mere 29 seconds into the middle stanza. Bobrowski’s shot from in close was denied by Miller but, Pannek’s crease-clearing attempt bounced off Kaasa’s leg for two-goal Hill-Murray cushion.

The gap was nearly widened to three just past the game’s midway point but Miller stopped McKenzie Steffen’s shorthanded breakaway attempt as well as Bobrowski’s follow-up shot. But Lindsey Featherstone scored her fifth of the season with just 2:17 left in the second to make it 4-1 and Patrick preserved the lead heading into the break with a terrific right-pad save on Caitlin Reilly’s back-door redirect with 25 seconds to go.

“That first goal kind of sucked the wind right out of us and we just couldn’t get back on track,” Herbst said. “I thought the third period we came out and we battled and we really played pretty good hockey.”

The Red Knights indeed came out strong in the final period, receiving a much-needed lift when Pannek’s shot from the left point beat Patrick clean to make it 4-2 only 18 seconds into the third and five seconds into a BSM power play. From that point the Red Knights began to apply consistent pressure in the Hill-Murray end.

It was Patrick who stole the show at that point, stoning Kippin Keller’s breakaway attempt at 10:16 and thwarting Reilly’s one-timer off a Pannek feed a minute later. “It was pretty intense,” Patrick said of the sequence. “I just tried to keep my focus because I knew if I lost it, it would be a lot harder to take the breakaway.”

“They have great [defensemen] and play great team defense,” Pannek said of Hill-Murray. “It’s hard to be down three goals and try to battle back one at a time because they’re so talented defensively and [Patrick] played a great game.”

Bobrowski then put the game away at 14:03 with a shot that caught a piece of BSM defenseman Kassandra Petersen’s stick on its way past Miller. Pannek added a late goal to complete her hat trick but it was too little, too late for the Red Knights.

“We had a number of opportunities and if we would have capitalized on those opportunities it would have been a different game,” Herbs said. “Their goalie played good, she came up with some big saves, and that’s what happens in a tight game like that.”

“It’s hard, it’s a hard three days for the kids mentally and physically,” Schafhauser said. “So to have your best game in the championship game, in my opinion, is a testament to their conditioning and mental strength.”