Joey Anderson scores twice to put Hill-Murray one win from
a return trip to the state tournament. 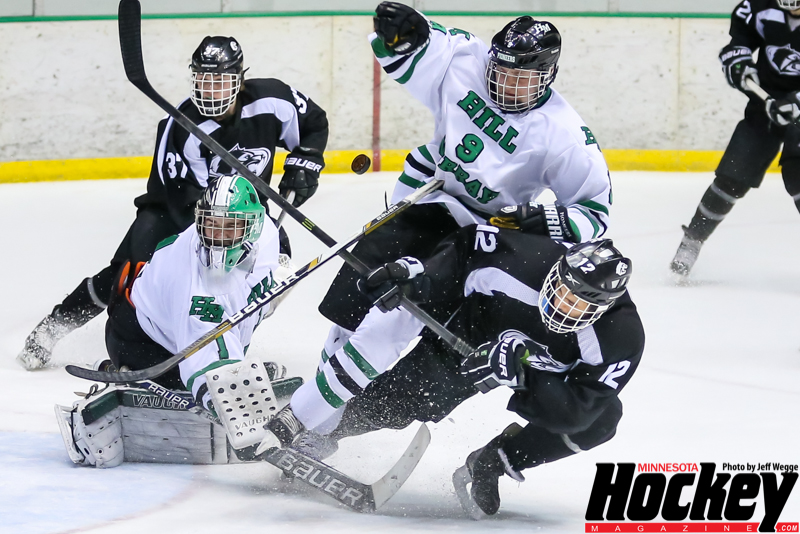 The Hill-Murray Pioneers scored twice in the first two periods and cruised to a 5-1 victory over Roseville in Tuesday’s Section 4AA semifinal at the State Fairgrounds Coliseum. The win advances the Pioneers to their ninth consecutive section final but for the last time ever at the Coliseum.

Freshman Joey Anderson scored his 24th and 25th goals of the season while Josh French and Zach Mills each contributed a goal and an assist to lead Hill-Murray, No. 3 in the final Minnesota Hockey Magazine.com class AA rankings, to its 24th win. Senior goaltender Sam Illgen made 16 saves to earn his 19th win of the season.

“Was it a perfect night? No. But we’re through the semi’s and we got a ‘W’,” Lechner said.”We missed some chances, I know they had a couple chances too, but we had some moments where it was 2-on1’s, 2-on-0’s and we’ve got to capitalize on those but 5-1 we’ll take.”

The Pioneers jumped on the Raiders right away courtesy of a Mills goal set up by French just 1:31 into the contest. Less than five minutes later, the Pioneers doubled the lead on Anderson’s first of the game.

“Before the game he tells us we want to initiate right away; shooting pucks and getting everything on net right away is always our main goal to start,” Anderson said.

A fairly tight game, territorially speaking, was broke open in a 2:37 span midway through the second period beginning with Anderson’s deft handling of a bouncing puck to roof a backhander over Roseville starting goalie Quinn Huff.  Dustin Krueger essentially iced the game shortly thereafter with his 15th of the year.

Lechner spoke after the game about what great hands Anderson possesses and dreams of him utilizing those skills in another sport.

“As an old baseball guy, I’d love to see him play baseball too but that’s not happening.”

The teams traded goals in the final period with Roseville’s Andrew Colvard ruining Illgen’s shutout bid with 1:47 to go. But Illgen was all smiles after the win with the knowledge he gets another chance to play at the Coliseum.

“There’s so much history in this building,” Illgen said. “You always remember when you were a kid watching ‘those guys’ and you just always wanted to be here playing at the Coliseum, it’s awesome.”

Anderson, too, is eager to return to play in Friday’s 8:30 pm final against the winner of the other semifinal between White Bear Lake and Stillwater because he believes the best is yet to come for the Pioneers.

“We’ve got to keep rolling with this, we’ve got to build off of it and keep getting better,” Anderson said. “I don’t think we’re near where we can potentially get to and if we keep working in practice for the next two days I think we’re going to be way better than we were tonight.”

Lechner said the importance of the win was twofold in that reaching the section final was in itself critical, but so was carrying on Hill-Murray’s tradition of doing so at the Coliseum.

“That would have been just a crusher if we weren’t able to win tonight,” Lechner said. “Partially because the season’s over but partially because I think it just seems right, without sounding arrogant, that we’re here on Friday.”