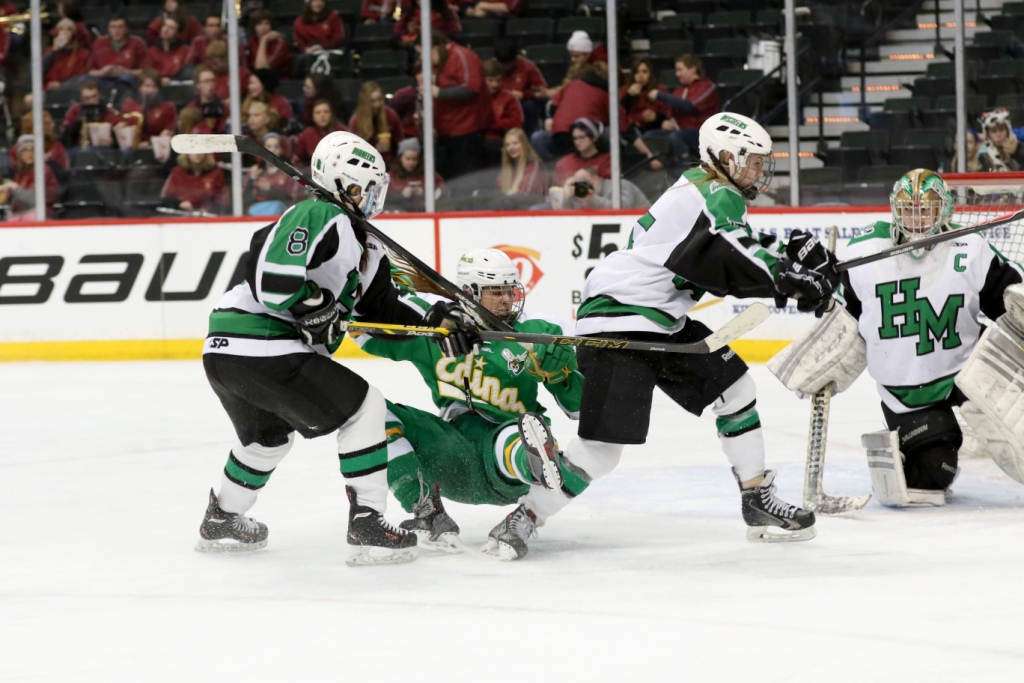 Hill-Murray kept the Edina offense mostly at bay in the Pioneers’ 2-1 Class 2A state semifinal win over the Hornets on Friday night at Xcel Energy Center. (MHM Photo / Mackenzie Marinovich)

SAINT PAUL – Edina goaltender Anna Goldstein constantly denied the Hill-Murray Pioneers scoring opportunities with 45 saves in the Class 2A semifinal game, Friday. From doing the splits to stopping the Pioneers on the breakaway, Goldstein put her body on the line to stop just about every puck.

But she had no chance on Laura Anderson’s late power-play tally which gave her team a 2-1 Class 2A girls’ state hockey semifinal victory over Edina at the Xcel Energy Center.

After the Pioneers went on a five-minute power play, Anderson converted as she put the puck in an open Edina net with just over four minutes remaining in regulation.

As wide open as the Edina net was, the junior forward worried the shot was too easy.

“I was hoping I wouldn’t whiff so I tried to get [the puck] into the net fast,” Anderson said.

With the win, the Pioneers return to the state championship for the second consecutive year and will face the winner of the Lakeville South vs. Minnetonka game.

When Edina forward Taylor Williamson clobbered a Pioneer player on an open ice check, she received a five minute major for contact to the head with 8:57 left in the game. Only one thing went through Anderson’s mind as her team went on the five-minute power play.

“I just knew we needed to capitalize on the moment and get shots on net and crash the net,” Anderson said

Anderson did just that when she scored the eventual game-winner, but they couldn’t celebrate the victory just yet. Pioneer Mekenzie Steffen headed to the box with just under two minutes remaining in regulation for interference. And with Edina pulling Goldstein, the Hornets had 6-on-4 hockey for the final 1:44.

Despite a barrage of shots as the clock ticked down in the final minute, the Hill-Murray defense and goaltender Leah Patrick held strong and preserved the victory, something they hope they can do again in less than 24 hours.

“During that time, I trusted my team and trusted Leah [Patrick] and the players and knew that somehow we’d find a way to win,” Anderson said.