Pioneers give Tonka the slip 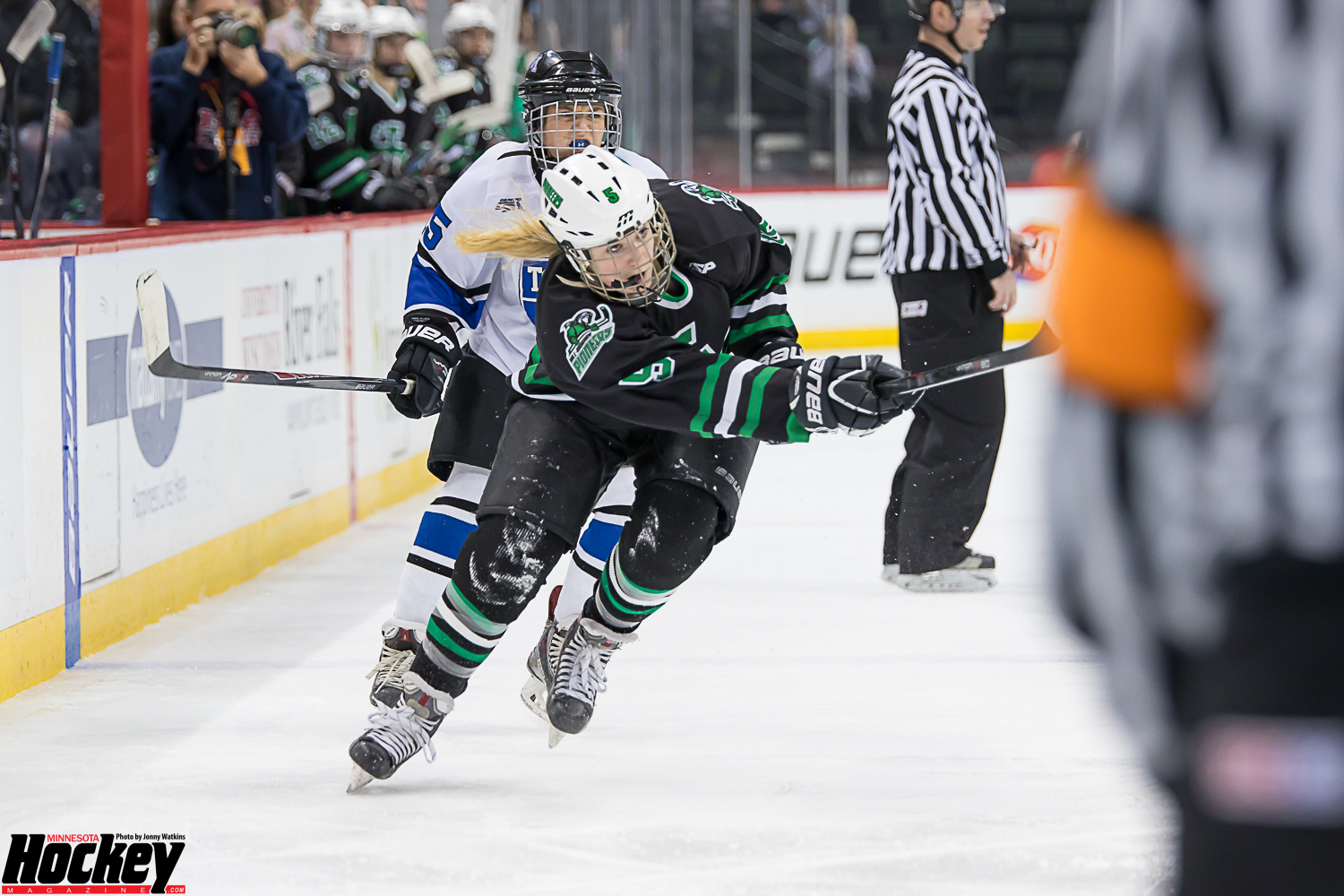 SAINT PAUL – A reporter shared with Hill-Murray coach Bill Schafhauser his observation that the Pioneers appeared to be uptight in the first period of their Class 2A girls’ state championship game against Minnetonka.

“You’d be uptight too … if you got scored on the first shift,” Shafhauser quipped.

But the Pioneers persevered through that early deficit and sluggish first period to rally for a 2-1 win over Minnetonka and capture a second consecutive state championship on Saturday night at Xcel Energy Center.

Jess Bonfe notched the game winner 2:03 into the second period and the Pioneers withstood a late Minnetonka surge to defend their title in their third straight trip, and fourth overall, to St. Paul.

“Hats off to Hill-Murray, they were a better team tonight,” Minnetonka coach Eric Johnson said. “They’re deep, they’re fast, they rebounded after the first period and they played really good hockey.”

The teams took turns outplaying the other in the first two periods so it was only appropriate the east and west metro powers would be tied 1-1 entering the third.

Shortly thereafter, however, Pioneer junior forward Jac Kaasa won a battle below the goal line before feeding the puck to an open Bonfe in the slot and the senior forward netted her 26th of the year and, perhaps, the biggest goal of her career.

Just as Blake did in the Class 1A title game, Minnetonka jumped out to a quick lead just 21 seconds after the opening faceoff. The Skippers’ Lucy Hoelscher carried the puck out of the left corner and fed a pass to the weak-side post to a waiting Emma Bigham who buried it for a 1-0 Tonka lead.

Hill-Murray coach Bill Schafhauser said the early goal was a “kind of a stunner” and threw his team off in the opening period.

“It threw me off and I can’t imagine the girls were much different,” Schafhauser said. “But it took some time to work through that, fortunately we kind of weathered it and [played] probably our best second period we’ve had in a long time.”

“It was really unexpected but we kind of took it, turned it around and just took that as energy,” Bonfe said.

Hill-Murray potted the equalizer when Laura Anderson carried the puck down the left side to the bottom of the circle before roofing a short-side wrist shot over Minnetonka goaltender Tatyana Delaittre’s shoulder at 10:43 of the second. The goal was the fourth of the tournament for Anderson who, along with teammate Meckenzie Steffen, was named to the All-Tournament team.

“They capitalized on a couple of our turnovers, had speed through the neutral zone and they’re a very, very good team,” Johnson said. “Our girls competed extremely hard and we thought this game would be a one-goal game, close matchup, and it was.”

The Pioneers nearly took their first lead with just over a minute to play in the second period but were thwarted by Minnetonka All-Tournament defenseman Kelsey Crow’s quick reflexes.

Hill-Murray’s Abigail Boreen fired a shot from the right circle which caromed off Crow’s skate and headed for the goal line. But as Crow fell back toward the crease she managed to get a stick on the puck and send it out of harm’s way.

Crow demonstrated maturity beyond her years and exhibited tremendous grace in defeat while recalling the goal she and her teammates set prior to the season to simply win their section and earn a chance to compete for another state title.

“We accomplished exactly what we set out to do,” Crow said. “State was just icing on the cake. It’s really tough to win state, to be the one out of 64 teams to be the No. 1 team in the state, and I think just winning sections and getting to state is the biggest accomplishment there is.

“In the end it comes down to the small things and Hill-Murray just did it better than us.”