Pipers go from worst to first 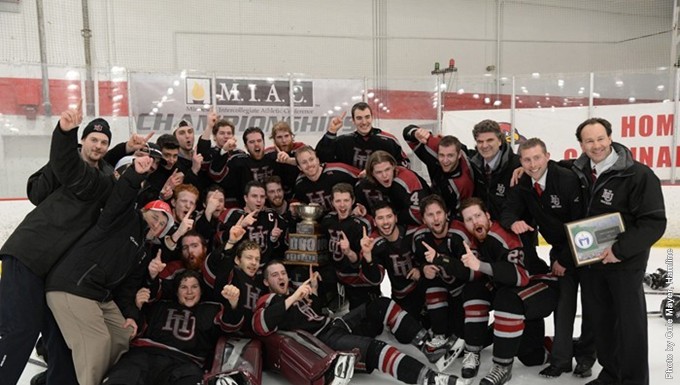 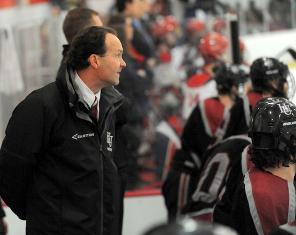 Hamline also garnered its first NCAA tournament win that year as it won an opening round contest at UW-Superior. Though the Pipers fell to eventual national champion St. Norbert the following weekend, the season remains the most successful in school history.

The face of the program shifted dramatically mere weeks later as Bell resigned and was replaced by Hamline alum Scott Steffen. In Steffen’s lone season behind the Pipers’ bench the team posted a 10-14-2 mark and things tailed off dramatically from there as over the following two seasons the Pipers went 3-41-6 under new head man Doc DelCastillo. It was the worst record of any team in the nation over that span.

Entering the 2014-15 season, DelCastillo was out and new head coach Cory Laylin was in. A 1992 graduate of the University of Minnesota and four-year letterwinner for the Golden Gophers, Laylin brought a significant amount of collegiate and professional playing experience to table and had spent the prior two seasons as head coach of the Brookings Blizzard of the North American Hockey League. He had also spent two years as an assistant at Hamline under Bell.

Despite the ample experience, Laylin had a formidable challenge on his hands as he was the program’s third coach in four seasons and had just taken over a program that had notched just three wins in the previous 32 months.

“I got the job in April and it was kind of a last second deal where I had to put things together, and ‘woosh,'” Laylin said. “I had to change the way things were going here and had to make some kind of drastic moves. We’re playing with eight freshman right now and the guys who stayed have been rejuvenated and everyone is staying within the system and doing what we’re asking.”

Hamline opened its 2014-15 campaign with a game in the MIAC Showcase against Saint John’s and the first 60 minutes of the Laylin Era didn’t go quite as well as those in the Hamline camp had hoped it might. The Pipers fell behind 2-0 after one period, 5-0 after two and ultimately suffered a 6-2 setback at the hands of the Johnnies.

However, Laylin points to the fallout of that season-opening loss as the first sign the new-look Pipers were buying into his vision and that positive change was closer on the horizon than perhaps anyone expected.

“That first game of the year we got beat by Saint John’s and we had a sit down with our captains,” Laylin said. “The next night we went out and beat St. Thomas and our guys started to believe. That’s when we started exploring who we are and it’s been a journey. As things have evolved the guys have really stepped up — it’s just a really good group. Especially some of the guys who have been though the dark times.”

One of the players who experienced those dark times is senior captain Joe Rubbelke. A defenseman from North Saint Paul, Minn., Rubbelke has had an exceedingly productive individual career despite the fact that for his first three collegiate seasons team success did not always follow.

A three-time MIAC all-conference selection who also garnered honorable mention honors as a freshman, Rubbelke has posted 15 goals and 56 assists for 71 points in 96 games with the Pipers. Despite the individual success, Rubbelke admits that playing for three coaches in a span of four years presented its fair share of challenges for the team.

“It’s not something you wish for,” Rubbelke said. “It’s tough going through seasons and getting used to new things year after year and not being able to build off what you’ve done. It’s been difficult but the guys that have been through it and have been around for it embrace it, and you know, it’s been a fun ride.” 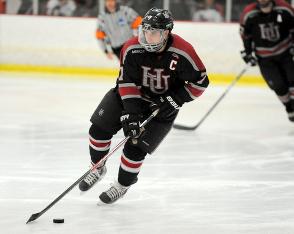 Senior captain Joe Rubbelke has seen his share of ups and downs over the past four seasons.
Photo: Cory Chuchna for d3photography.com

As Laylin and his staff worked to continue to right the ship, success came in modest chunks in the weeks that followed and a 2-0 win over UW-Superior on November 15 ran the Pipers’ record to 3-3, which meant that in a span of just 16 days they had matched their combined win total of the previous two seasons.

Hamline went 1-1-3 over the remainder of the first semester and stood at 4-4-3 overall at the holiday layoff. While not an earth-shattering start by any stretch, considering the track record of the previous few years it was a start that had raised eyebrows around the MIAC and much of the West Region.

“It was a little bit of a surprise if you look back on the past couple of seasons, “Rubbelke said. “Winning three games was pretty tough for us and were in a lot of games but we just couldn’t figure out how to get a win. Coming into this season when Coach Laylin got the job he brought in a new energy and excitement right away. He went out and recruited a lot of guys and have a lot of new freshmen in this year that have done a great job for us, and also a couple of transfers who are juniors who have helped out a lot.”

While the start to the season was certainly encouraging in its own right, Laylin and Rubbelke were both quick to mention that it was the first weekend following the break that proved to be a turning point for the team. Not only in terms of success on the ice but perhaps more importantly in terms of establishing confidence in the belief that this year’s team might actually be capable of accomplishing something special.

“It happened on the weekend we played Lake Forest and UW-Stevens Point,” Laylin said. “We came back from a 4-1 deficit against Lake Forest, had a great third period and tied those guys. Then the next night we came out and beat Stevens Point at home here and that was a great weekend for our guys. We’ve just kind of springboarded from there.”

Four third period goals, capped off by a natural hat trick by junior forward Kevin Novakovich, paced the comeback that forged the eventially 5-5 (ot) tie with the Foresters, while a goal by junior forward Brandon Zurn 7:36 into the third period proved the game-winner in the Pipers’ 5-4 win over Stevens Point.

“I think we all had a feeling right after break when we had a series with Lake Forest, who has been a good team this year, and then obviously the game against Stevens Point,” Rubbelke added. “Those gave us a good kickstart to the second semester and a lot of confidence knowing we could hang with a really good team like Stevens Point.”

“Those were a real eye opener and turning point for us this year.”

Hamline ultimately posted a 7-6-1 mark after the New Year and finished the regular season 11-10-4 overall Its 7-6-3 MIAC record proved enough to sneak it into the five-team MIAC postseason as the number five seed. Come the playoffs, it took a three third period goals to eek out a 4-3 win at Augsburg in the opening round, while just two nights later the Pipers again scored three times in the third as they scored a 6-3 semifinal upset win at nationally-ranked and top-seeded St. Thomas.

The win over the Tommies set up a showdown for the league title at Saint Mary’s — the same Saint Mary’s that had scored a weekend sweep with a pair of one-goal wins over the Pipers just three weeks prior. A third Cardinals’ win was not in the cards however, as Hamline again won the third period by scoring twice to break a 2-2 deadlock and claim the MIAC championship with a 4-2 win.

“Those previous games [against Saint Mary’s] could have gone either way, to be honest,” Laylin said. “We outshot them pretty heavily in one of the two, and in the title game we were very opportunistic and finished our chances. I thought we played real well in the third period of the final game — we blocked shots and did what we needed to do. Our kids are gritty and they did what they had to to get the results.” 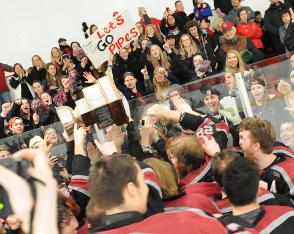 Can the Pipers pull of yet another postseason road upset?
Photo: Cory Chuchna for d3photography.com

The victory also, against all odds, sent Hamline to the NCAA tournament for just the second time in school history where they will hit the road for the fourth time this postseason for a quarterfinal against the same Stevens Point team they beat on January 10. The Pointers enter the contest as the No. 3 ranked team in the D3hockey.com Men’s Top 15, while the Pipers again stand as underdogs in the eyes of many.

“I think they’re the best team we played all year, even though we won that one,” Laylin said. “They’re four lines deep, they have really, really good defenseman — four of the best around. We’re going to have to play our best game to be in that game.”

“We think very highly of them and they’re probably the best team we’ve played all year,” Rubbelke added. “For us it’s going to come down to just playing a good road game. Keep it simple — don’t go out there and try to win the game in the first period. Keep it simple in the defensive zone and hopefully that ultimately leads to scoring opportunities and we score on those opportunities that we do get.”

One thing is certain: Hamline now sits just one win away from winning its way to a Frozen Four that is being hosted right in its own backyard. Laylin repeatedly praised the work ethic and the gritty nature of this year’s team and whether those features, and perhaps some more third period prowess, will be enough to upend Stevens Point on Saturday night remains to be seen.

But does whether the Pipers manage to win yet another playoff road game even really matter? In some ways of course it does, but to the fact that what they have accomplished this season will go in the books as one of the most remarkable turnarounds in Division III men’s hockey history, it likely doesn’t.

“We’re young and we have such a great group of guys that want to play for each other with such a blue collar mentality,” Laylin said. “It’s a joy to coach these guys because they just won’t quit. From what we’ve come from to see where we are now, there has been no more enjoyable time in my coaching career than to see this group form the way it has.”

After all, measurable progress was attained by the end of the season’s first weekend, and all it took was the right mix of a dedicated new coach and his staff, and the right blend of old and new talent — some of which had been through the darkest years in program history and were eager and willing to do whatever it took to get things turned around in a hurry.

Which is exactly what Hamline has just done.

“This group is the closest group I’ve ever played with at Hamline here,” Rubbelke said. “With guys always hanging out, being together, having each other’s backs — it’s just been fun to be able to be around each other. We’re just a super close team which has helped us be successful.”

“We’re hungry to win and everybody is excited to bring the program back up to where it has been and where we know it can be.”