From “The Pit” to The ‘Port 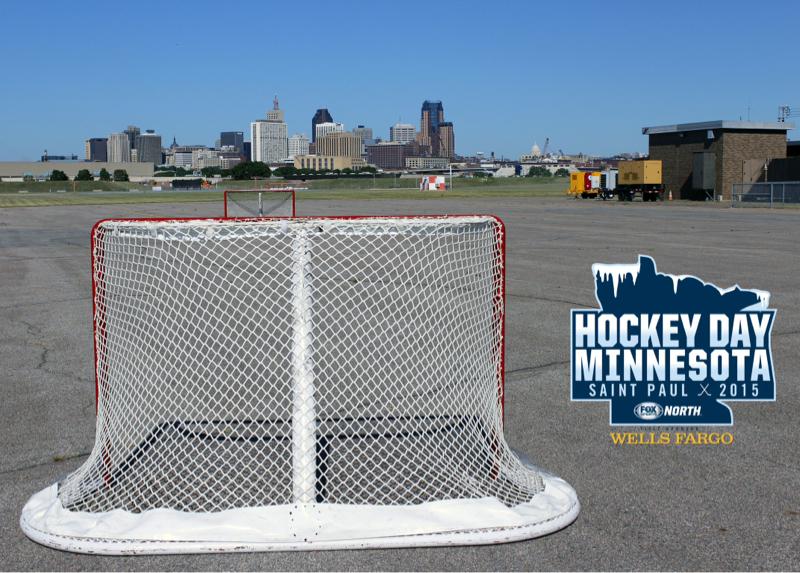 Elk River and its Handke Pit may be a tough act to follow but St. Paul and its Holman Field Airport  are going to give it their best shot.

The city’s skyline will provide the backdrop for Hockey Day Minnesota 2015, presented by Wells Fargo as the capital city has been named as host of the event for a second time (2009).The ninth annual statewide celebration of hockey is set for Saturday, Jan. 17, 2015 just across the Mississippi River from downtown. Proceeds of the event will benefit Saint Paul Youth Hockey and Serving Our Troops.

The site of HDM 2015 with the St. Paul skyline in the distance. (Photo: Zach Halverson)

“We are thrilled to bring Wells Fargo Hockey Day Minnesota 2015 to Saint Paul’s Holman Field,” said Wild Vice President of Brand Content and Communications John Maher. “This is the perfect way to commemorate prep hockey’s second century in Saint Paul. It will be a day of celebration, from puck drop of the first high school game until the final horn sounds at that night’s Wild game.”

“Saint Paul is known for being both the capital of the State of Hockey and for supporting our service members and their families,” said Saint Paul Mayor Chris Coleman. “I can’t think of a better way to combine these two qualities than by celebrating Hockey Day Minnesota at Holman Field. The Minnesota Wild has always been a great partner and this is just the latest example of their commitment to Saint Paul, our service members, and their families.”

Legendary East-Side power, St. Paul Johnson will face off against a Luverne team coming off of its first MSHSL State Tournament appearance in 2014. Hill-Murray is set to take on perennial rival St. Thomas Academy while Cretin-Derham Hall and the Duluth Northern Stars girls are featured in the final game at Holman Field.

The Wild greet the newly-branded Arizona Coyotes at Xcel Energy Center to cap off the day. A college game was referenced at the press conference but the University of Minnesota was not specifically mentioned. The Gopher men are typically involved in the event and do host Wisconsin that evening, but with that being a Big Ten conference game Fox Sports North may be prohibited from including it. Details of the 2014-15 Gopher television schedule have yet to be finalized.

Johnson (2007 and 2009) and Hill-Murray (2008 and 2011) are each making their third Hockey Day appearance while it’s St. Thomas Academy’s second (2008, also vs. Hill-Murray) and Luverne is making its HDM debut. It will be the inaugural appearance for both girls teams as well. 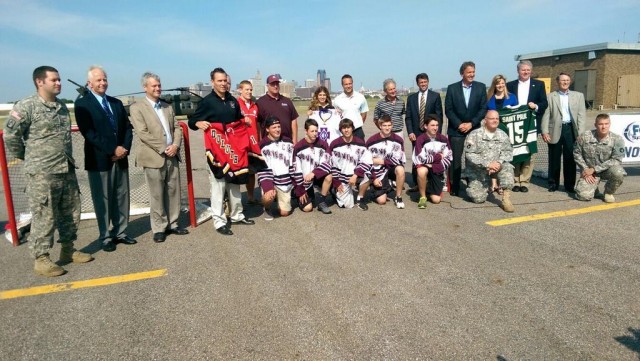 “Hockey fans have been eagerly anticipating news regarding our ninth annual Hockey Day Minnesota event,” said Mike Dimond, FOX Sports North Senior Vice President and General Manager. “We are excited to bring the outdoor games back to St. Paul and especially proud to pay tribute to the men and women who serve our country by showcasing the Minnesota National Guard at Holman Field and with special features from Kuwait. This should be a special year.”

“The Minnesota National Guard is pleased to be a part of Hockey Day Minnesota 2015,” said Col. Kevin Olson, Director of Communications. “This event showcases how Minnesotans statewide connect to our military service members and families through hockey. Holman Field is a unique venue that will allow hockey fans to meet in person National Guard soldiers and airmen who serve our nation, state and communities.”

Hockey Day Minnesota is partnering with Serving Our Troops for this historic event, linking hockey in Minnesota to our soldiers and families. Since 2004, Serving Our Troops has been providing a special message from home for our Minnesota National Guard in the form of dinner with the their families, completing 10 projects and serving nearly 80,000 meals around the globe. Hockey Day Minnesota will include unique interactions with our soldiers and families as our communities drop the puck for a truly special message from home.