Wild players take their shooting skills off the ice, into the field 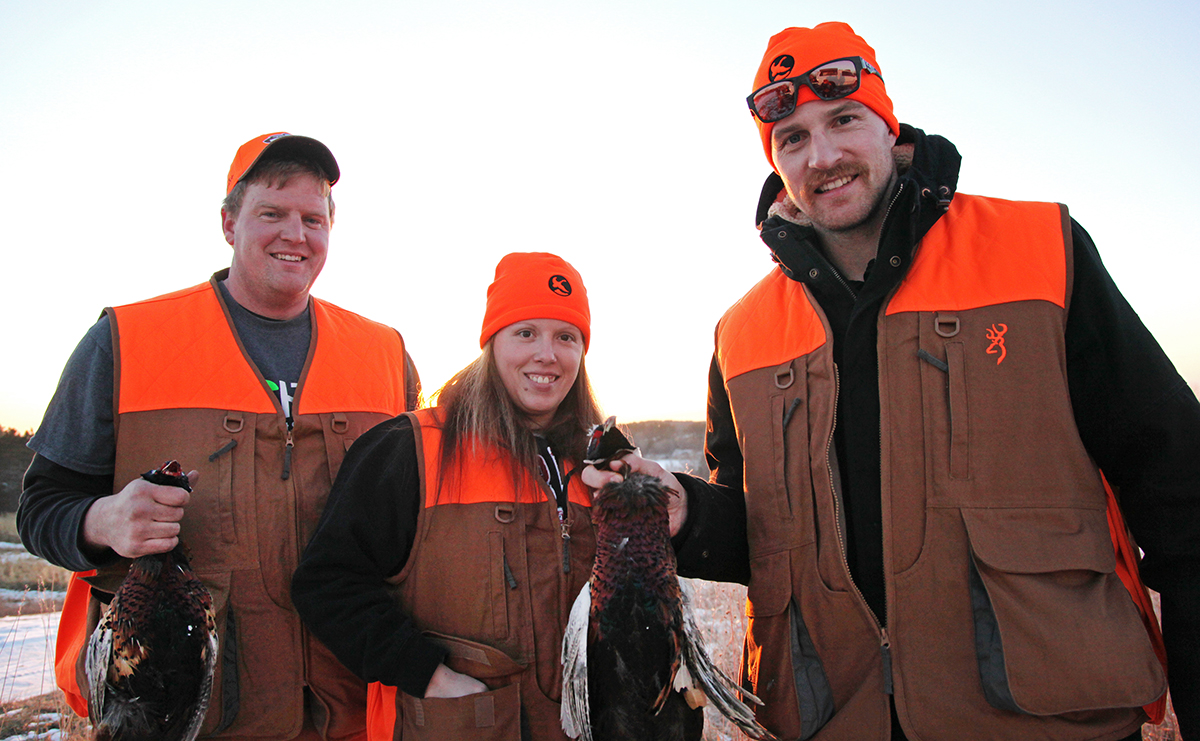 Wild players take shooting skills off the ice, into the field

It was the first bird they saw that day. The small, energetic yellow lab, Izzy, flushed it out of a row of corn and with an ear-ringing blast, Nate Olson fired and hit his mark.

He looked over at Wild defenseman Keith Ballard and quipped, “you want the next shot?”

It was a day that could succinctly be summed up as fun. Four Minnesota Wild fans and their guests got to spend an afternoon pheasant hunting with a Wild player on Saturday afternoon at Wild Wings at Oneka Hunt Club in Hugo, Minnesota.

Olson was one of four winners in the Gander Mountain “Hunt with the Wild” sweepstakes. He brought along his father, Steve, as the two have hunted together ever since Nate was a young boy in Hancock, Minnesota where Steve lives. While they were paired with Ballard, forwards Ryan Cater, Kyle Brodziak and Justin Fontaine also took part in the experience.

Each winner received a guided pheasant hunt with a member of the Wild, along with a catered lunch and dinner, an autograph signing session and gifts from Gander Mountain. Hunters were also outfitted with field wear from Browning, boots from Irish Setter and shotguns from Benelli.

Ballard, who enjoys hunting when he can, noted that the day was a nice break from hockey and an interesting way to interact with fans.

“It’s nice to get away from hockey a little bit. It’s a long season. And it’s only half a day but to get your mind off it and do something else or think about something else — which is very important. You can drive yourself crazy sometimes if you don’t.”

Saturday marked the second installment of the hunt. Last year was the first, which the defenseman also participated in, along with former Wild defenseman Clayton Stoner.

Olson, a Golden Valley native, wasn’t aware of last year’s hunt, but heard about this year’s event through Facebook and figured he would sign up.

“I was surprised when I got a call; I thought they were trying to sell me something, to be honest,” Olson joked. “They were like ‘want to hunting next weekend?’ And well, I was like ‘Yeah, I’ll go hunting.’”

While the exchange was simple and understated, Olson enjoyed to opportunity to get to know a player from one of his favorite teams and share the experience with his dad. While it was his first time at Wild Wings, Olson would recommend the experience to anyone interested in the future.

“They’ve been great hosts and we got all sorts of great gear,” Olson said. “It’s been awesome.”

While Ballard likes to hunt, the last time he was able to spend an extended amount of time hunting was during the lockout two years ago. Being from Minnesota, it’s a lifestyle he’s grown up with and truly enjoys. It’s made even better now that he’s back in his home state.

After a long day in the field, all the groups shared a nice meal of pheasant potpie and got the chance to talk about their experiences — and of course brag about how they fared.

As a veteran of the event, Ballard was quick to note that the end of the day meal was one of the best parts.

“The hunting is a lot of fun, the pheasant potpie is outstanding.”