Minnesota gets by Montreal minus Suter and power play 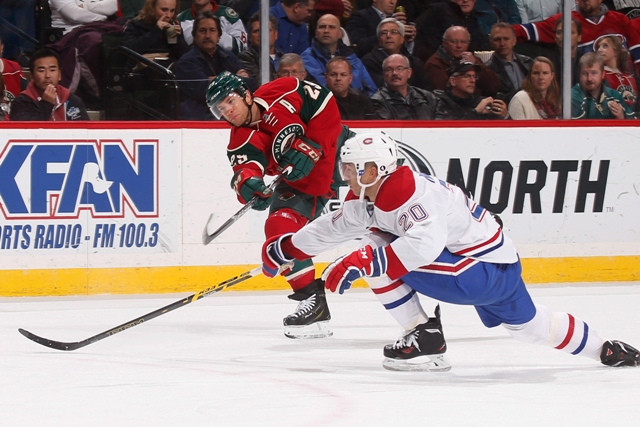 Wild forward Jason Pominville’s goal turned out to be the difference in Minnesota’s 2-1 win over the Montreal Canadiens on Wednesday night at Xcel Energy Center. (Bruce Kluckhohn /Getty Images)

Minnesota gets by Montreal minus Suter and power play

No Ryan Suter? No problem.

On a night its best defenseman “called in sick”, the Minnesota Wild turned in one its best defensive efforts of the season in a 2-1 win over the Montreal Canadiens Wednesday night at Xcel Energy Center.

Minnesota limited the Canadiens to 10 shots through two periods and 19 for the game to raise its home record to 8-2-1 while Darcy Kuemper earned his 11th win of the season (11-7-0) on 18 saves while narrowly missing his fourth shutout.

Suter, who missed his first game as a member of the Wild, had played 171 straight games in a Minnesota uniform, including 18 in the Stanley Cup playoffs. He is the only player to have skated in every game with Minnesota the last two-plus seasons and has only missed 32 career games in his 10 NHL seasons.

He has led all skaters, Wild and opponent, in ice time in 134 of regular-season games he has played consecutively with Minnesota (87.6%).

Suter’s minutes are not only about volume, though, he plays the crucial minutes on both special teams and when the game is on the line. But players like Jared Spurgeon (26:09 TOI), Jonas Brodin (25:14) and Marco Scandella (25:07) filled in admirably.

“We knew [Suter’s absence] was going to be felt,” Yeo said. “I thought that we had defensemen who stepped up … I thought that they did a good job as far as managing the game; we spent a lot of time in the offensive zone.”

“Everyone knows how tough a guy to replace Ryan is with all the minutes he plays and situations he plays,” Parise said. “They did a good job retrieving the puck and getting out of our zone quickly and making the good first pass.”

The stingy defense was critical as Minnesota’s ever-struggling power play was shut out again after generating just five shots in five opportunities, including none on a five-minute major early in the third.

“We won the game, it doesn’t matter,” Parise said. “Do you want us to score four power-play goals and lose? We on the game, we beat arguably the best team in the Eastern Conference and that’s the most important thing.”

Jason Pominville’s controversial second-period goal turned out to be the difference after Montreal’s Alex Galchenyuk scored with 57.6 seconds remaining.

One day after his recall from Iowa, Christian Folin set up the game winner with a simple wrist shot from the right point. The rising shot deflected off the shaft of Pominville’s vertically-raised stick and behind Montreal goaltender Carey Price for his fifth goal of the season. Price finished with 33 saves.

“It was coming almost at my head so I decided to duck and it hit my stick and went in so I’ll take it,” Pominville said of his first goal since a Nov. 8 loss to the Canadiens in Montreal. “It’s weird the way it goes; you have some good looks that you don’t score on and you get one of those where you’re just kind of shaking your head wondering why that happens”

The play was subject to a lengthy review but because it was initially ruled a goal, it stood due to lack of conclusive evidence to overturn it.

“Luckily they called it a goal on the ice,” Wild forward Zach Parise said. “I think if they hadn’t, it probably wouldn’t have counted but luckily it did and he was able to get one not even shooting, not even looking at the puck, so that’s the way it goes sometimes.”

The Wild grabbed the early lead just 19 seconds into the contest on Jason Zucker’s 10th goal of the season. Mikko Koivu won an offensive zone faceoff to Zucker whose sharp-angle shot ricocheted off the crossbar and Price’s backside before dropping behind the goal line.

Zucker’s goal is his fifth in his last seven games and sixth point (5-1–6) while the assist for Koivu is his fifth point in five games equaling his production in the season’s first 19. Minnesota is 6-2-0 this season when Zucker scores.

“When you’re playing against Carey Price, you know that goals are not going to come easily,” Yeo said. “The screens, the tips, the rebounds, you have to find a way to score some goals like that against that team.”

Christian Folin returned to the lineup after scoring twice and adding two assists in eight games for the Iowa Wild. Folin, who missed five games earlier this season as one of the Wild’s many mumps victims, said the stint in Des Moines was valuable.

“I played a lot of minutes down in Iowa and I think it was really helpful to get back into game shape and get some confidence back up too,” said Folin who signed with the Wild as a free-agent last spring following a collegiate career at UMass Lowell.

The 6-foot-3, 214-pound native of Gothenburg, Sweden earned an assist in his only game with the Wild last year and was happy to finally find his way the score sheet this season on Pominville’s difference-making goal. Folin admits, however, it wasn’t by design.

“I didn’t really see too much, I just wanted it on net,” Folin said, his left eyelid stitched together thanks to a third period hit by Montreal’s Eric Tangradi which resulted in Tangradi’s ejection. “I had a guy in front of me and I just wanted to get it down there and it went in; I don’t really know how but it went in and I’ll take that as my first assist this year.”

In addition, Gary Bettman was in attendance in advance of Thursday’s Lester Patrick Trophy presentation to NHL Deputy Commissioner Bill Daly and Philadelphia Flyers President Paul Holmgren who were also at the game. The event is in conjunction with the U.S. Hockey Hall of Fame ceremony.

Prior to the game, the Wild honored Canadiens legend Jean Beliveau and former Minnesota North Star player and coach Murray Oliver with a moment of silence and highlight packages of each on the arena’s scoreboard.

Beliveau, who passed away on Tuesday at the age of 83, won 10 Stanley Cups in 20 NHL seasons, all in Montreal, and captained the Canadiens for 10 seasons, making him the longest tenured captain in team history. Although he retired in 1971 ,Beliveau still ranks second in team history in regular-season scoring (1,219 points), third in goals (507) and second in assists. Beliveau remains Montreal’s all-time playoff point leader with 176 (79-97–176) in 162 games.

Oliver, who suffered a fatal heart attack on Sunday, Nov. 23 at the age of 77, was laid to rest on Wednesday. The five-time All-Star as a player with Detroit, Boston, Toronto and Minnesota went on become a North Star assistant from 1978-86. He also served a 36-game stint as head coach of the team in 1982-83, replacing Glen Sonmor, as Minnesota finished second in the Norris Division and eliminated the Maple Leafs in the first round of the Stanley Cup playoffs.