“Other” former Sabre carries Wild to preseason win over Penguins. 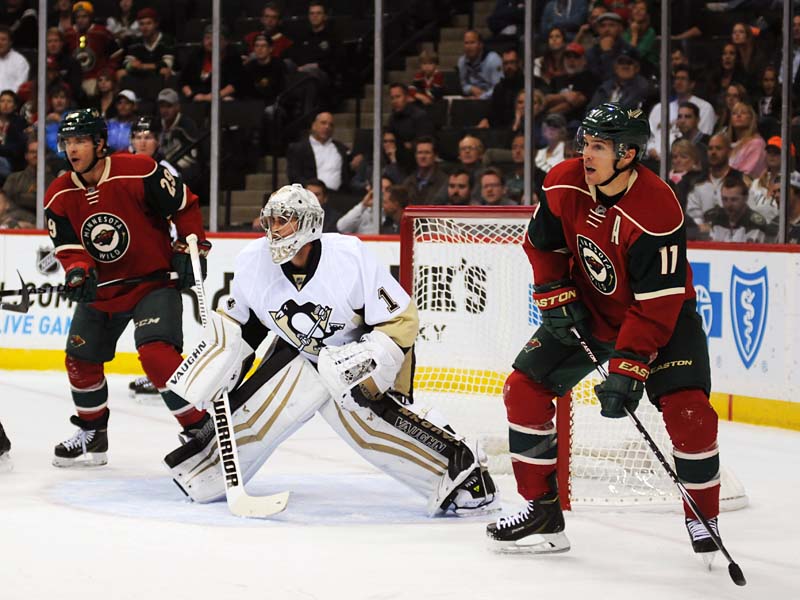 Jason Pominville (3 goals) and Zach Parise (1) accounted for all of Minnesota’s goal scoring in a 4-1 win over Pittsburgh on Monday night at Xcel Energy Center. (MHM Photo / Jordan Doffing)

“Other” former Sabre carries Wild to preseason win over Penguins.

SAINT PAUL—With ex-Gophers Erik Haula and Keith Ballard scratched, the stage was set for former University of Minnesota star Thomas Vanek to hog the spotlight in his home debut as a member of the Minnesota Wild Monday night against the Pittsburgh Penguins at the Xcel Energy Center.

Three ex-Gophers were playing with the Wild at the X for the first time Monday, but Vanek stands among the elite in the storied history of Gophers hockey. He was the Most Outstanding Player during Minnesota’s 2003 NCAA championship and came back to lead his team to the Frozen Four again in 2004, playing 83 games in two seasons with the Gophers while scoring 57 goals and 113 points.

The stat line for Vanek in the Wild’s 4-1 exhibition victory: 19 shifts, one shot and one giveaway.

Compare those numbers to those of former Gophers center Jordan Schroeder: 16 shifts, one shot on goal, one giveaway and three takeaways.

Turns out, the Wild’s big gun who formerly played for the Buffalo Sabres was Jason Pominville, who netted a natural hat trick in the third period to rescue Minnesota from what appeared to be an otherwise lackluster evening.

Yes, Pominville was outstanding, winger Zach Parise said, but he did not get a whole lot of help.

“We all need to be a lot better,” Parise said. 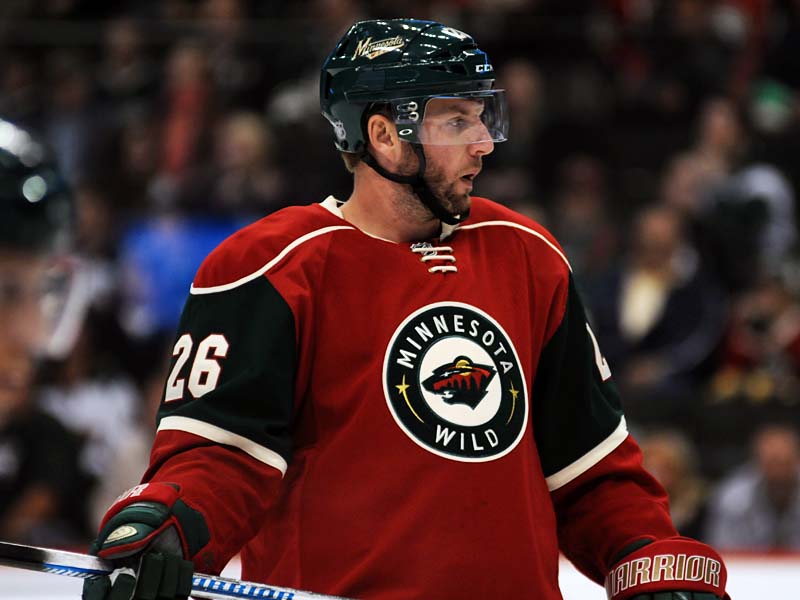 Thomas Vanek played his first game on home ice as a member of the Wild on Monday night. (MHM Photo / Jordan Doffing)

Vanek, the 217-pound Austrian, missed Minnesota’s home exhibition opener with an upper-body problem and could have been pretty hopped up about finally playing in front of the home crowd Monday.

“He’s a pretty calm guy,” Parise said. “If he does have nerves, he doesn’t really show them.”

That was true during Vanek’s days with the Gophers, and also true through 663 NHL games in which he bagged 556 points.

He went from Buffalo to the Islanders to the Canadiens last season, and Pominville says the pressure does not get any greater than that in Montreal.

“I don’t think he’s the type of guy that gets too nervous out there,” Pominville said. “That’s what makes him so good; he’s composed and doesn’t feel any pressure at all.”

Vanek, who famously drove Pominville to the Buffalo airport after Minnesota acquired Pominville two seasons ago, took a pass from Mikko Koivu in the third period Monday as he closed in on Pens goalie Jeff Zatkoff with the score tied 1-1. Instead of shooting, however, he tried a drop pass that was picked off by Pittsburgh.

“He was on his backhand,” Pominville said. “Sometimes it’s tough when you have back-checkers with their stick there – it’s tough to get a good shot off on your backhand — so he probably wanted to move it to a guy on his forehand. He’s the type of guy that would make those plays sometimes. You’ve got to trust his offensive abilities. If he gets that through, that guy’s going to have a point-blank shot for sure.”

In a non-counting game, coach Mike Yeo was just happy to finish with more goals then the Penguins.

Like many in the crowd of 16,106, he was not particularly enthusiastic about what he saw from his team through the first two periods.

“The third period was tough to watch in spurts, too,” he added.

Guys are still shaking off the “summer hockey” syndrome, according to Parise, who had a goal and an assist.

Yeo couldn’t find much good to say about most of his players, limiting his praise mostly to Pominville, Parise and goaltender Darcy Kuemper, who stopped 32 of 33 shots.

Asked about Schroeder, who was placed on waivers after the game and is ticketed for the Iowa Wild, Yeo said the former Gopher was one of many who did not warrant special praise.

Vanek, who declined requests for postgame interviews, fell into the same category.

But Vanek has played just two exhibitions and has scored one goal, so there’s no reason whatsoever to worry about him, according to Pominville.

Pominville – who on Monday played on a line with Parise and Mikael Granlund – said the Koivu-Vanek-Coyle line should be something to behold this season.

“That line’s going to be a good line, especially in the West,” Pominville said. “All three of them are big boys and we need that type of line to play against the bigger lines.”