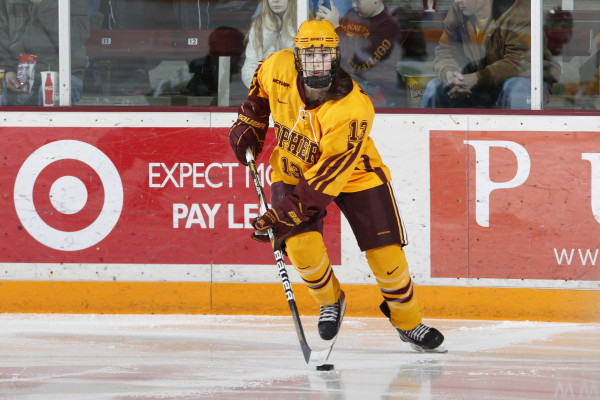 There was no offseason rust for the No. 1 University of Minnesota women’s hockey team against Penn State Friday night. Not that there would have been any excuses. Six months removed from its last game, Minnesota had several players back from an extended time off the ice.

The two-time defending WCHA champions got help from a pair of them and more.

“I’m very happy with the win tonight,” Minnesota women’s head coach Brad Frost said after the game. “Even though (Penn State) gave up 8 goals, I thought they played tremendous.”

Aside from a slow opening 10 minutes, it looked like Minnesota could have played at the same fast paced level for an additional 60 minutes.

Penn State, making the program’s first-ever visit to Ridder, initially stood toe to toe with the Gophers. The Nittany Lions had a power play and 5-4 shot advantage before the tides turned quickly. Junior defenseman Milica McMillen and sophomore forward Dani Cameranesi both beat PSU goalie Celine Whitlinger 1:32 apart to give Minnesota a 2-0 lead and force Penn State to take a timeout 9:36 into the game.

Both Gophers scored twice Friday, with McMillen’s pair each coming with the team having an extra skater. Cameranesi’s new linemate, Patty Kazmaier finalist Hannah Brandt, had three points (1G-2A) for her 26th career game with three points or more.

One player who could have had rust against Penn State yet didn’t was redshirt freshman goalie Sidney Peters who earned a shutout in her first collegiate game. The Geneva, Ill. native spent all last season practicing with the team without getting into a game. She found out Wednesday that she would be getting the nod against Penn State.

Peters made the most of it, making 15 saves in front of her family including a first-period breakaway on Nittany Lion forward Shannon Yoxheimer.

“I don’t think there are words to describe how special a moment this was,” said Peters, adding she would always remember her first collegiate save. “Just that one game was truly magical.”

Joining her in having an extended layoff was redshirt sophomore defenseman Lee Stecklein. Spending last season with the United State Olympic Team and being off since February, Stecklein had a pair of shots tipped by teammates for goals.

“Our forwards are incredible. I don’t know how they hit the puck out of the air like that. It’s something that I’ve never been able to do and that’s why I shoot the puck,” she said. “Great tips. That’s what we need and that’s their job.

She also impacted the ice on her own end.

“Obviously Lee was +3 tonight and had a lot of blocked shots,” added Frost. “She was just a calming presence back there and dependable. Now we have her running the power play back there, which she didn’t do her freshman year.”

As the game went on, the play and speed from the blue line in the offensive zone stymied Penn State, whose team featured seven Minnesotans familiar to the Gophers (including freshman forward Caitlin Reilly, sister of Gopher men’s hockey trio Mike, Connor and Ryan).

Brandt, McMillen and Cameranesi scored in the second period to extend the Minnesota lead to a 5-0. In the third period it was Meghan Lorence and freshman Cara Piazza each tallying power-play goals on Whitlinger, who made 40 saves Friday.

Minnesota will face the Terriers tomorrow at 7 p.m. CT.