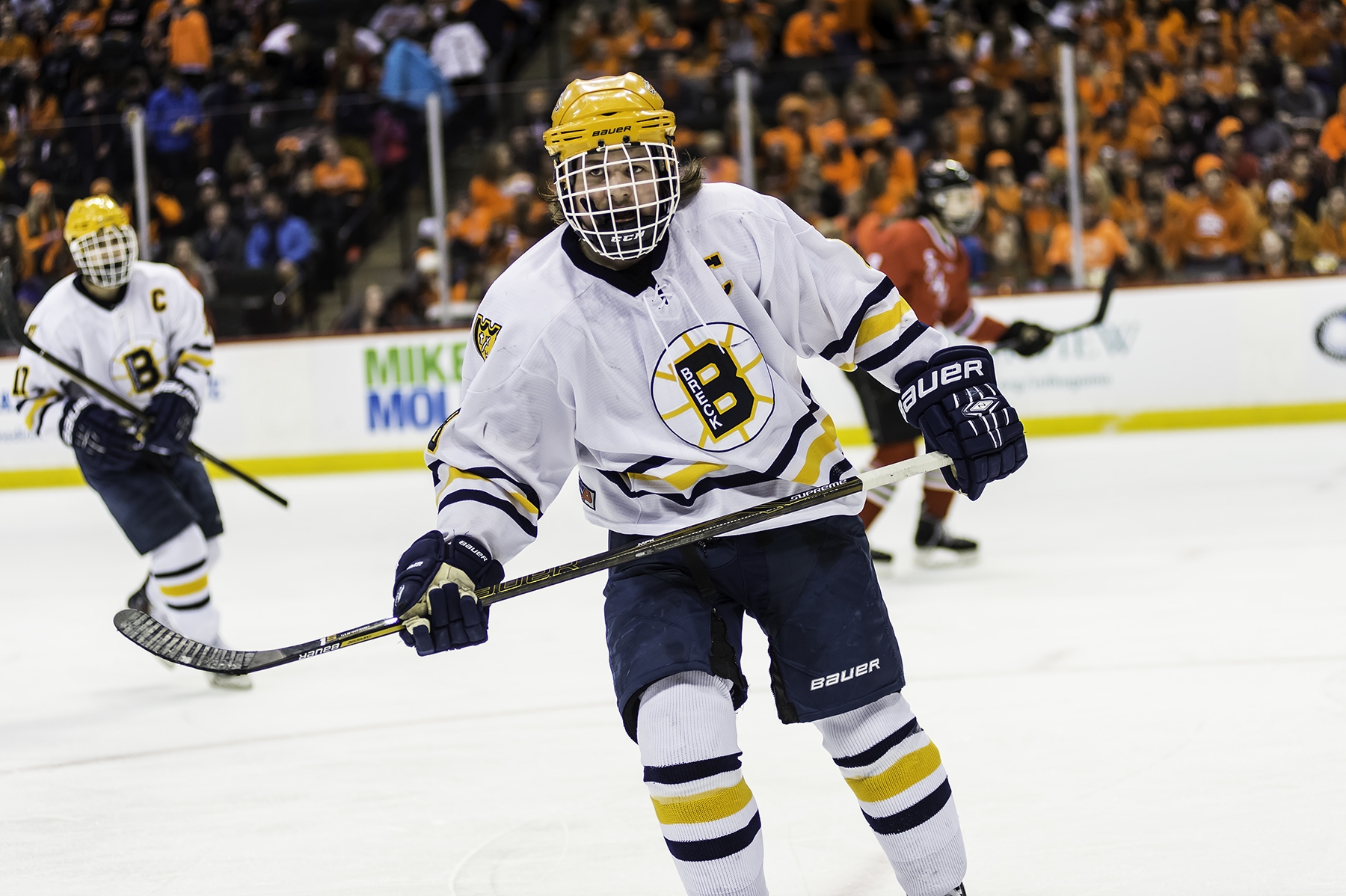 ST. PAUL — After a disappointing quarterfinal round exit at last year’s State Boys Hockey Tournament, Chase Ellingson and William Blake made sure the Breck Mustangs’ stay at the Xcel Energy Center would last a little longer this time around.

Ellingson and Blake each had a hat trick and added an assist as second-seeded Breck rolled to an 8-0 win over Mankato West in the first Class A quarterfinal game on Wednesday.

The Mustangs, which lost 1-0 to St. Cloud Apollo in the quarterfinal round last season, will play Thief River Falls in Friday’s 11 a.m. Class 1A semifinal in St. Paul. The Prowlers beat Princeton 6-1 in Wednesday’s second quarterfinal.

“This is our seventh time here. We’ve learned that you’ve gotta win that first game,” Breck coach Les Larson said. “I’ve got nothing against Mariucci [Arena], but there are 10,000 empty seats a 9 a.m. [on Friday]. We’ve experienced that. It’s a lot better to be here. And now we’re here, so we can move onto the next step.”

In the process, Breck’s lethal power play claimed another victim, scoring all three times it was on the ice. This time, it was the Scarlets on the business end of one of the state’s best man-advantage units.

Breck’s power play, which has clicked at a 40 percent clip entering the tournament, scored twice in the first period to give the Mustangs a 2-0 lead after 17 minutes.

“We work really hard on it. We spend a lot of time on it,” Larson said. “And we have good players. We have players that understand what we’re trying to do.”

Blake scored his first goal of the day and Breck’s third power-play goal 60 seconds into the second period.

But the senior forward wasn’t done.

He added an even-strength goal then a short-handed tally, finishing the natural hat trick in a span of 6 minutes 41 seconds.

“It’s pretty special. A lot better than last year, a lot more fun,” Blake said. “It’s nice to get it done, get the win and move onto the next one.”

The three-goal burst staked Breck to a 5-0 lead headed to third period when Ellingson put the finishing touches on his hat trick with a pair of goals, including one pretty coast-to-coast effort that also came short-handed.

Ellingson, a Mr. Hockey Award finalist, now has 40 goals and 37 assists in 29 games this season.

The Scarlets skated with Breck for the opening five minutes of the game before a holding penalty on freshman Nick Wieben near center ice put the Mustangs on their first power play at 5:07.

Junior Austin Heidemann banged home a rebound 1:41 into the man advantage to give Breck a 1-0 lead.

Wieben was whistled for kneeing five minutes later and Ellingson roofed a rebound try after an initial pad save by West junior goaltender Jackson Peterson.

“We came out with the intensity we needed to come out with,” West coach Curtis Doell said. “We were skating with them 5-on-5, we get the penalty and it took the wind out of our sails.”

West had two five-minute power play chances to get back into the game in the second and third periods, but instead saw Breck score short-handed on each opportunity.

“We were a split second behind on everything which I think led to a lot of blocked shots,” said West captain Tyler Loe. “We put ourself in a position to bury a few pucks with two five-minute penalties, we just couldn’t do it.”

The Scarlets will move to the consolation bracket and play Princeton  at Mariucci Arena at 10 a.m. on Friday.