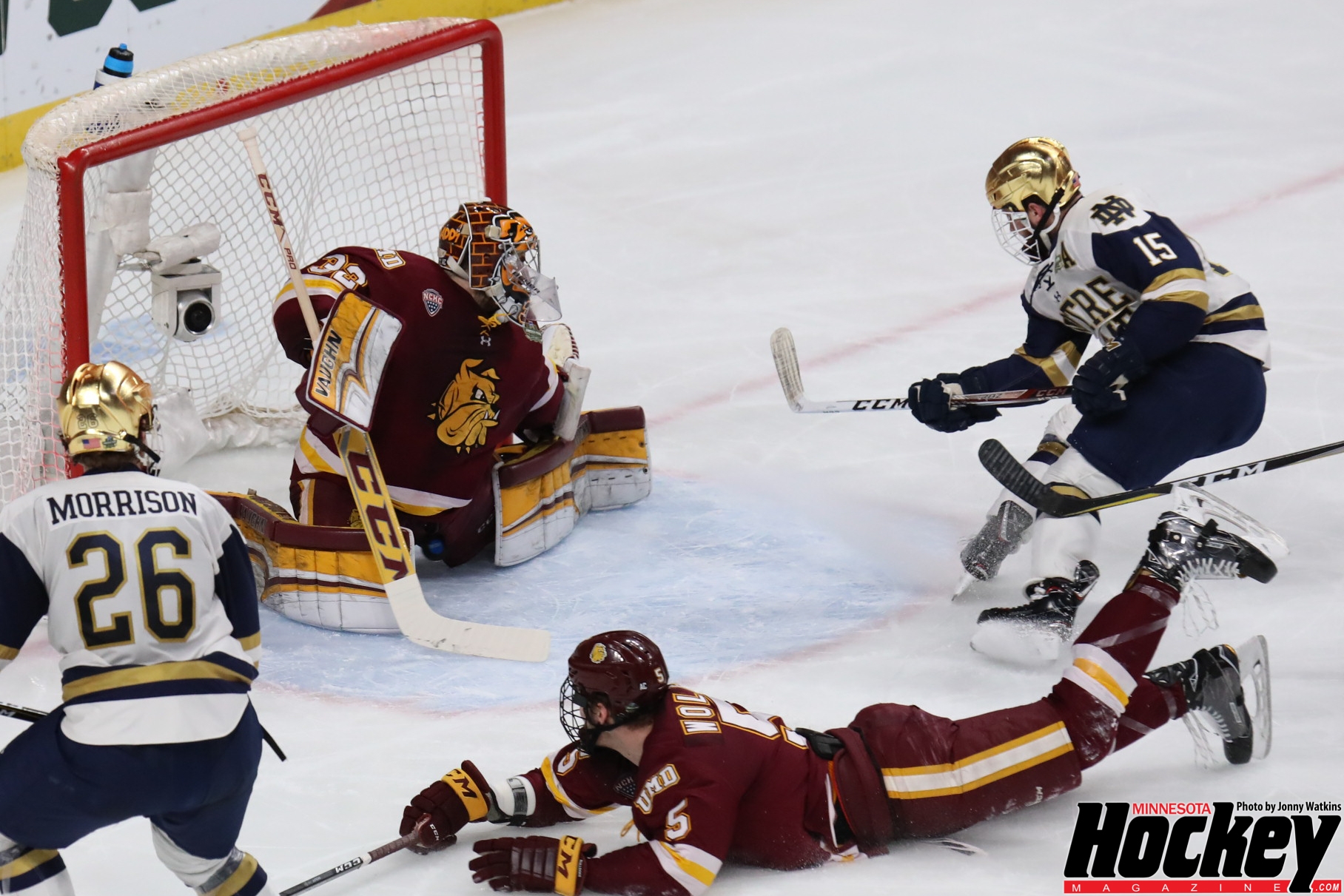 St. Paul — One of the well-documented themes of the 2018 NCAA Tournament was Minnesota-Duluth’s shutdown defense, a facet of the Bulldogs game that won the battle in the Frozen Four title game.

But Notre Dame’s power play sure came close to stealing the show Saturday night at the Xcel Energy Center in St. Paul. The Irish fell short, losing the championship 2-1 to the Bulldogs.

“Our power play has always been a big part of us in all these one-goal games,” Irish defenseman Jordon Gross, from Maple Grove, said.

Every time Notre Dame trailed during the NCAA tournament, its man advantage gave the Irish the spark it needed with the team’s first goal. It gave Notre Dame a spark Saturday, too, but a lack of opportunities down the stretch let that spark fizzle.

Trailing 2-0 for the second time this Frozen Four, Notre Dame scored on the power play to get within a goal of the Bulldogs. Andrew Oglevie was the man to score that first goal for the third time this tournament.

“(Our power play unit) has played together for a long time, we know where guys are going to be and we work on it a lot in practice,” said Oglevie, who had 15 goals this season, nine of which on the power play (eighth-most nationally).

“We pre-scout the other team pretty well.”

Oglevie’s redirection from the top of the crease on a rush off a pass from Cam Morrison sent the puck into UMD goaltender Hunter Shepard’s equipment and it trickled through into the net. 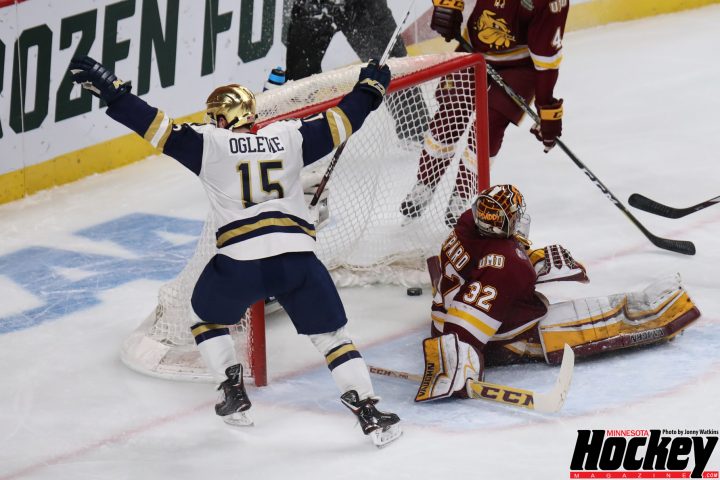 “The breakout goal was a direct result of our pre-scout,” Oglevie said. “We knew (the UMD penalty kill) would be vulnerable to the fast-break breakout. We posted two guys high and I kind of floated up the middle.

“Jake (Evans) made a nice pass up to Cam (Morrison) and he found me back door. I just tried to get a stick on it, not really trying to pick a corner. I just wanted to get it on net. I think it went five-hole.”

Notre Dame found itself trailing Providence by a goal after the first period of the East Region final, but an Oglevie power play goal got the Irish on the board late in the second period in a 2-1 win.

And Thursday night in the Frozen Four semifinals, after giving Michigan a two-goal lead going into the second, Notre Dame again used an Oglevie goal with the advantage to spark the comeback.

The Irish finished the season with a power play that converted 23.7 percent of its opportunities, good for seventh in the nation and went 6-for-15 from the beginning of the Big Ten Playoffs through Thursday’s semifinal.

But after Notre Dame scored Saturday, it wasn’t rewarded another power play, and without it, couldn’t get the equalizer.

“(The power play) got us back into the game and gave us momentum,” said Gross, who assisted on two power play goals and scored one this postseason. “Unfortunately, the refs put their whistles away after that goal. They didn’t want to give us another one.”