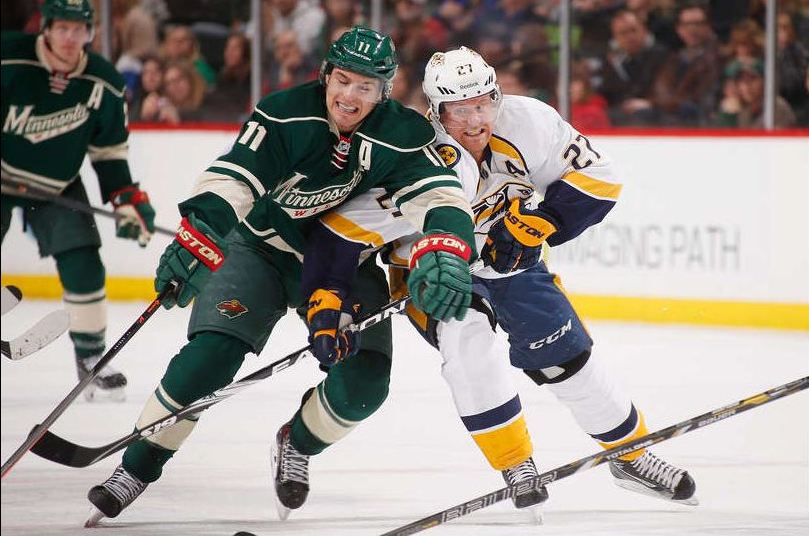 Zach Parise (11) of the Minnesota Wild and Patric Hornqvist (27) of the Nashville Predators skate to the puck during the game on April 13, 2014 at the Xcel Energy Center. (Photo by Bruce Kluckhohn/NHLI via Getty Images)

ST. PAUL — With its playoff fate determined and the first round opponent known, the Minnesota Wild stumbled to the close of their regular season with a 7-3 loss at the hands of the Nashville Predators on Sunday night. Minnesota blew a pair of two-goal leads and allowed six unanswered goals in the loss in front of 18,658 at Xcel Energy Center.

Earlier in the afternoon, the St. Louis Blues lost their sixth-straight game to stagger to an injury-riddled end to their regular season, essentially handing the Central Division crown to the Colorado Avalanche. Colorado clinched without needing a win in their season finale and lost 3-2 to the Anaheim Ducks. The Avalanche and Wild will faceoff in round one of the playoffs.

Minnesota held a pair of leads at 2-0 and 3-1 and saw them melt away to a Nashville team that finished the season with an exclamation point by posting a 9-1-2 record over their final twelve games. For the second night in a row, the Predators scored seven goals as they took down the Chicago Blackawks Saturday night by a score of 7-5.

Former Wisconsin Badger Craig Smith had two goals and two assists to lead the way for Nashville and Calle Jarnkrok had a three-point effort in delivering a goal and two assists.

Erik Haula opened the scoring for the Wild at 5:13 of the first period and Minnesota opened a 2-0 lead on Jason Pominville’s 30th goal of the season later in the period. Haula assisted on Pominville’s goal for the first two-point game of the young Wild center’s career.

An odd goal put the Predators back in the game as Wild goalie Ilya Bryzgalov stumbled to the right side of his net and fell as he tried to play a puck. It was stolen from Wild defenseman Jonas Brodin by the Predator’s Paul Gaustad who fed Rich Clune for the easy bury on the open net.

Zach Parise scored his 29th of the season at 2:10 of the second period on a beautiful feed from right to left through the slot on the power play by Mikko Koivu to give the Wild the 3-1 lead. The assist for Koivu was his team leading 43rd of the season.

As the game swung the Predators way that included physical battles between Shea Weber and Matt Cooke, then Clune and Cooke, the Wild had little to gain in the game as the Colorado Avalanche and the first round of the playoffs were waiting in four days. Bryzgalov was pulled from the game to start the third period and John Curry finished the game giving up two goals on 12 shots.

“Everybody got through healthy and obviously, we know that’s not the recipe,” Wild coach Mike Yeo said of his team’s execution and the subsequent result.

Yeo was asked after the game if the production from Haula creates an issue regarding line combinations with the pending return of Mikael Granlund. Yeo was quick to dispel that thought in pointing to the ability of Granlund. While he said that there is no decision, he was clear that Granlund is key to Minnesota’s success.

“I think Halsy (Haula) deserves an awful lot of credit for what he has done,” Yeo said. “When it comes to Granny (Granlund), we will see how practice goes this week. We are talking about a guy who led our team when Mikko went down playing against number one D pairings and number one centermen. When you look at what he did in the Olympics playing the best players in the world, being an all-star in that tournament, this is a pretty good player.”

The Wild are making their fifth appearance in the Stanley Cup playoffs and their second in a row. They will face a Colorado team that catapulted from the lower end of the NHL last season to Central Division Champions under first-year head coach Patrick Roy.

“This is a good team, a really good team,” Yeo said. “Winning our division, the way they have gone from start to finish, this is a team that we have to have a lot of respect for … so obviously defensively it’s going to be a challenge for us. With that, they are an in your face team and how we execute is important too.”

The new season starts this Thursday for the Wild in Denver with the faceoff at 8:30pm. Clearly moving on and into the playoffs is a great thing for the Wild as they erase Sunday night’s finale against the Predators.