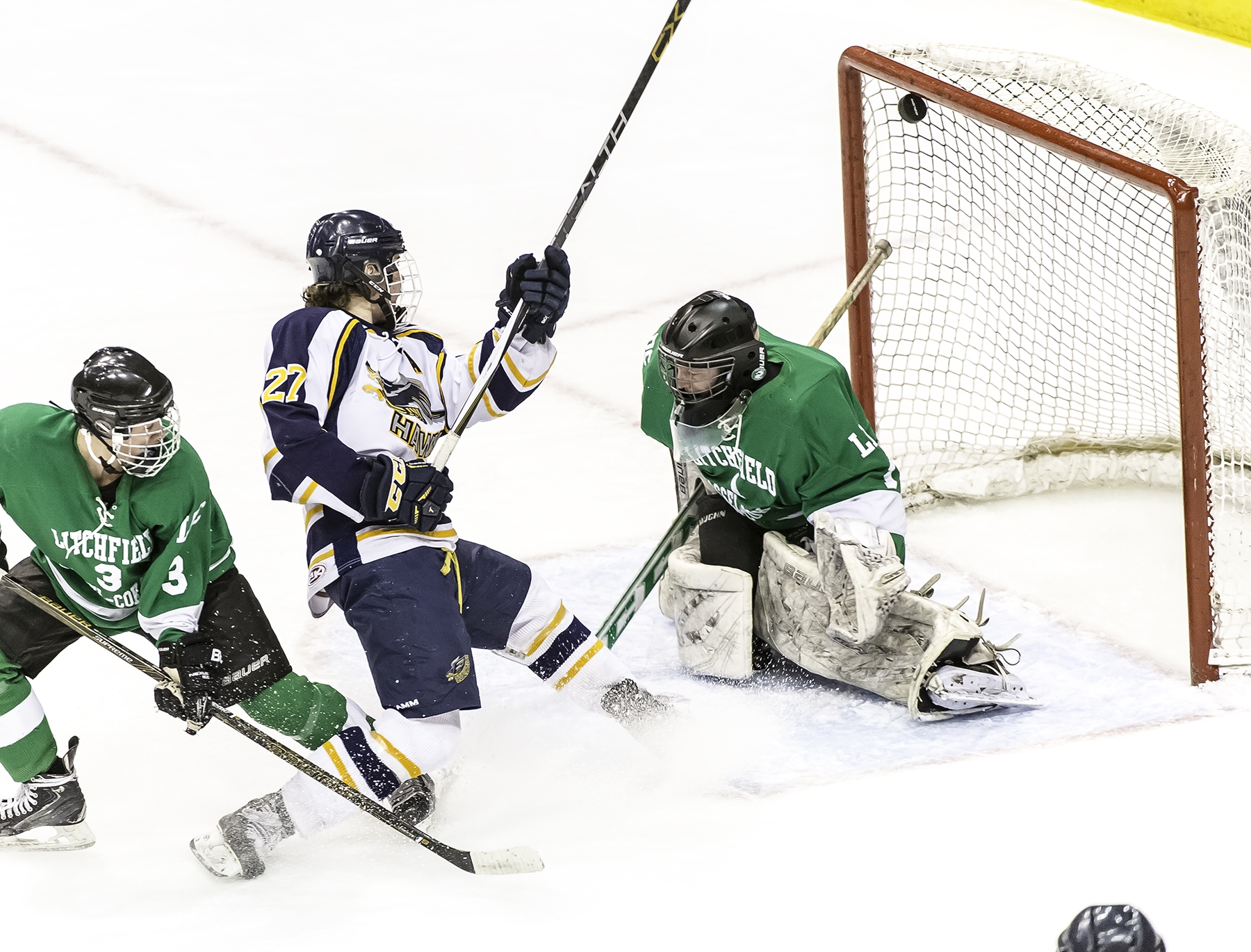 Hermantown’s Cole Koepke goes bar down for his third goal of the game in the second period of the Hawks’ 11-3 Class 1A quarterfinal win over Litchfield/Dassel-Cokato on Wednesday night at Xcel Energy Center. (Photo by Tim Kolehmainen / Breakdown Sports U.S.A.)

Waking a sleeping giant is never a good idea.

The Litchfield/Dassel-Cokato Dragons learned that lesson the hard way after having the gall to come within a goal of perennial Class 1A title contender Hermantown in their State Boys Hockey Tournament quarterfinal 11-3 loss to the Hawks on Wednesday night at Xcel Energy Center.

The Dragons breathed fire on the Hawks with David Raisanen’s second goal of the gamet at 11:05 of the second period to draw LDC within one at 3-2.

“I felt like we got some momentum from that and definitely had a chance in the game,” Raisanen said.

But that only served to spark top-seeded Hermantown as the Hawks as the one-goal deficit was short lived. Senior Cole Koepke scored his second of the game just 26 seconds later to launch a three-goal barrage which he completed 1:47 later with his hat-trick goal to extend Hermantown’s lead to 6-2.

“You know, you go 3-2 with those guys and for about five or six minutes there we kind of had them, I don’t know if scrambling is the right term, but we were going after them,” Litchfield/Dassel-Cokato coach Chris Olson said. “It did probably wake them up a little bit but I loved our effort, I loved how hard we played.”

The second-period blitz was nothing new for Hermantown coach Bruce Plante who is seeking to end a streak of six consecutive runner-up finishes at the state tournament and break through for the Hawks’ first title since 2007.

“We’ve done this thing where we’ve scored in spurts all year,” Hermantown coach Bruce Plante said. “They just get extra determined when we give up a goal, they’re so competitive.”

Koepke would add a fourth goal and a pair of assists in his team’s five goal third period turn the game into a rout.

“When they scored that goal, we knew they were kind of having some of the momentum,” Koepke said. “We just knew we had to go out there and get it back. It kind of gave us a reality check.”

“Once we got that first one, we knew we could keep putting it in the net,” junior Ryan Sandelin said. “We got confidence in ourselves and we started playing the way we can play, getting it deep, putting pucks on net and pucks just started going in.”

Koepke and linemates Jesse Jacques (2 goals, 1 assist) and Sandelin (1 goal, 4 assists) combined for 14 points in the win. It’s hardly surprising as they produced 161 points as a unit coming into the tournament.

“Any given night, one of them is gonna do that because they’re so unselfish and just move the puck,” Plante said. “Whoever’s the right guy to give it to that’s what they do and some nights it’s Jesse that puck draws to, sometimes it’s Ryan and sometimes it’s Cole. It was just Cole’s night tonight.”

The line’s mixture of speed (Koepke), playmaking (Jacques) and versatility (Sandelin) has been lighting lamps across the state all season long.

“The kid can fly up and down the rink,” Sandelin said of Koepke. “I think his skating really puts him in the right spot at the right time and all you’ve got to do is give it to him.”

Koepke seemed a bit embarrassed by the spotlight shining on him and eagerly deflected praise to his teammates.

“Things were just clicking well between me, Jesse and Ryan,” Koepke said. “All three of us were making the right play the whole game and it just worked out for us good.”