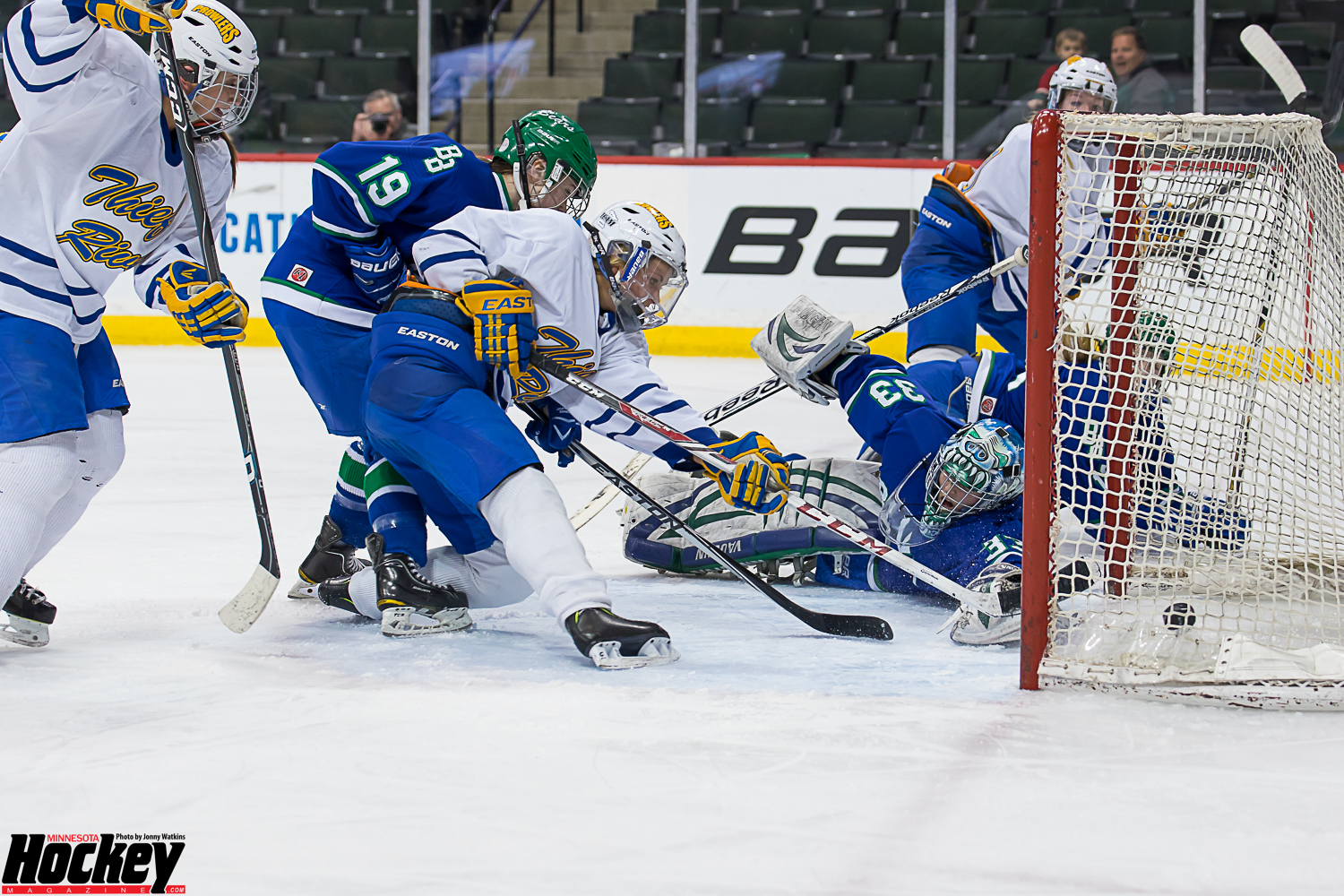 SAINT PAUL –When Thief River Falls hired Whitney Restemayer to be the next coach of their girls’ hockey team in 2014-2015, Restemayer took on the task of ending the Prowlers’ state tournament drought.

Thief River Falls fell to East Grand Forks 2-1 in double overtime in the Section 8A final last season, falling just short of their first state tournament appearance and the players on Thief River Falls made clear to their new head coach that needed to change.

“They were really upset that we were not here last year,” Restemayer said. “We had that conversation of, ‘I know you want it and I want it as much as you do, so we’re going to do everything we can to make it [to state]’.”

Not only did the Prowlers make their first state appearance in school history in 2015, they won the whole thing. Thief River Falls dethroned the two-time defending Class 1A state champion Blake 3-1 in the 2015 state final on Saturday evening at the Xcel Energy Center. After defeating the Blake School, who some argue should move up to 2A, the Prowlers couldn’t have been happier with ruining the Bears’ plan for a three-peat.

“To come in and show not only a metro school, but also a private school kind of what we’ve got, I’m proud to be apart of it,” Restemayer said. “We succeeded in not only showing what Northern Minnesota has but also what Thief River Falls has.”

But right away in the state championship, it was Blake who showed what they have.

After firing a shot on the Blake net, Thief River Falls turned over the puck in the neutral zone and Bears junior forward Carly Bullock took advantage as she sped down the ice and scored off a backhand shot, just 21 seconds into the state final.

The Blake Bears also limited a Prowler offense that averaged nearly 56 shots through the first two state tournament games. But even with the Bears’ ability to limit Thief River Falls to a tournament low 28 shots, the Prowlers netted the equalizer when sophomore forward Kora Torkelson knocked in a loose puck sitting in the Blake crease. Torkelson’s goal, her third of the tournament, came in the final 18 seconds of a Thief River Falls power play.

Bears goaltender Anna Kruesel played a key role in slowing down the Prowler offensive attack, even making saves without a stick. Yet, the freshman couldn’t quite get her glove in the way of a top-shelf goal from Prowler forward Emily Bergland that gave Thief River Falls a 2-1 lead with just over three minutes remaining in regulation.

For the senior forward, it was a surreal moment sealing the deal for her team.

Unbelievable also describes Restemayer’s first season as head coach of Thief River Falls, where she won a state championship against state-tournament-regular Blake for both the Thief River Falls community and Northern Minnesota.

“Our girls just saw it as another game, but there was a little a grit behind that saying, ‘we’re from small town Northern Minnesota and we’re going to put our stamp on this’,” Restemayer said.