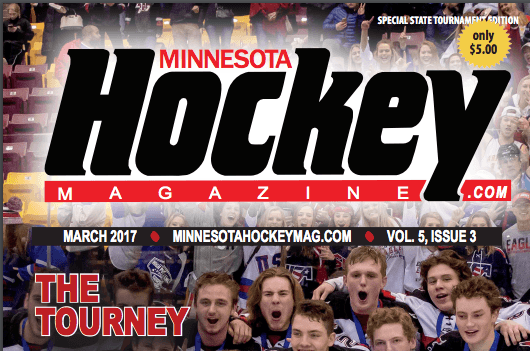 Editor’s note: A St. Paul Academy question was erroneously inserted in the Mahtomedi page of the print version of our March issue. A correction was made for the digital release so we have included both answers in this space. We apologize to the team and Zephyrs fans for the error.

(Print Version)
What former SPA coach once played alongside the likes of Mario Lemieux and Jaromir Jagr?

Joe Dziedzic (2010-2012), a Minneapolis native, who was named Minnesota’s “Mr. Hockey” in 1990 during his senior year at Edison High School and was drafted #61 overall by the Pittsburgh Penguins in the 1990 NHL Amateur Draft.

(Digital Version)
Which Mahtomedi brothers were all-tourney in the 1994 Class A tournament as the Zephyrs took third-place?

Jesse and Brandon Sampair.  In a 7-2 win over St. Cloud Cathedral in the third-place game, Brandon had four goals and an assist and Jesse assisted on five goals, including each of Brandon’s markers.  Jesse finished with two goals and seven assists while Brandon had five goals and three assists overall.