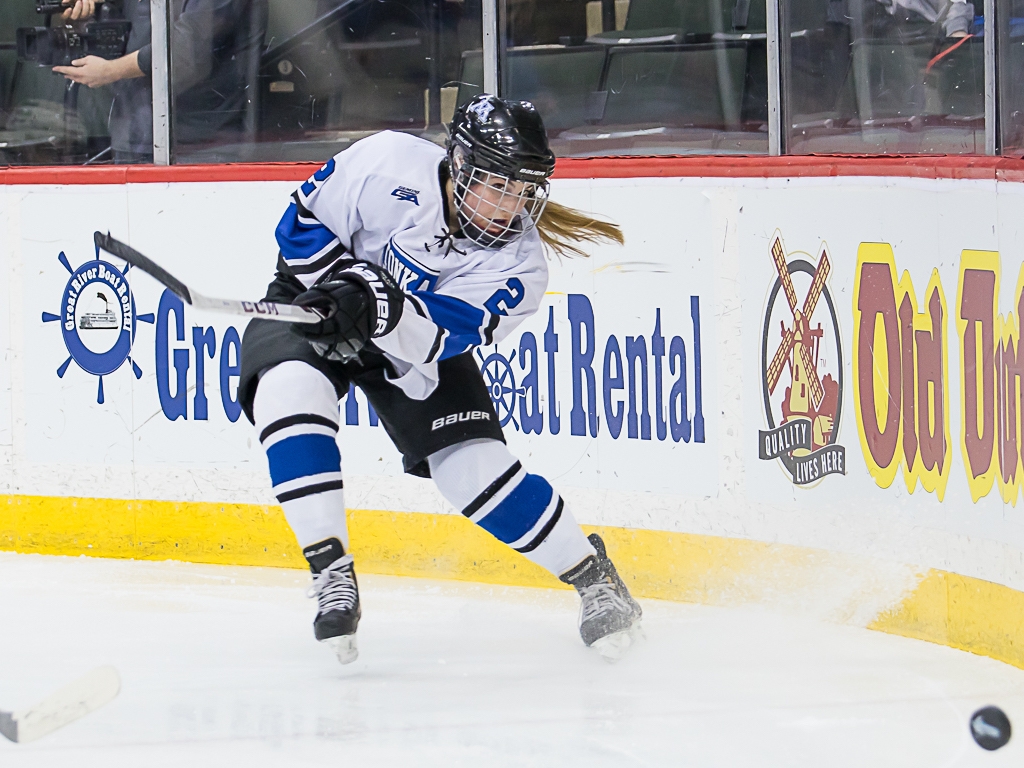 When Minnetonka Skippers’ head coach Eric Johnson took over the girls’ program twelve years ago, they were in a transition period. Many girls were still playing in the boys’ program, and some girls were playing on the girls’ team. The program’s groundwork had been laid shortly before Johnson became the head coach.

“Our youth director at the time, Dan Phillips, was instrumental in getting more girls to play in the girls’ program,” said the former St. Cloud State forward. “We had kind of a ‘grassroots’ effort at recruiting kids who played soccer or other sports. We gained some traction when some of our top female hockey players made the switch from the boys’ program to the girls’.”

Johnson, who had previously coached boys at different levels, noticed early on he had to coach girls differently.

“We had to find ways to implement competition into practice,” recalled the Armstrong alumni. “They would do drills well, but incorporating more competition encourages creativity – they don’t have to follow the ‘rules’ or look to a coach to see if they’re doing the drill ‘right’.”

Balancing fun and competition is something Johnson and his staff stress to this day.

“We have an up-tempo, fun atmosphere in practice. We play music and let our players choose the playlist,” Johnson explains. “We emphasize passing, teamwork and communication. We push the pace in practice to make it feel as much like a game as possible.”

“These mini-competitions make kids think about, for example, how to win battles for the puck. We put something on the line – maybe the loser does five pushups or something. Our coaching staff aims to keep the drills and games challenging but fun.”

On and off the ice, the Skippers program has turned a tragedy into an inspiration.

“The character of our team has been largely shaped by the legacy of Kelly Phillips, an alum who was killed in a car accident in 2007,” Johnson said. “Kelly had a terrific attitude and was a great teammate. We award a player each season with the “Kelly Phillips Character Award” – which means putting the team first and making a positive difference in the time they have wearing a Minnetonka jersey. Our girls have really embraced the spirit of this award.”

Minnetonka (9-7-3) heads to Stillwater on Saturday to face the Ponies outdoors along the St. Croix River in a 5:30 p.m. game which will be televised live on Fox Sports North Plus as part of the the annual Hockey Day Minnesota event.

The Skippers bring with them a trio of players who will be playing at or near the DI level next year.

“Elizabeth Kubicek is a senior and is having a terrific season,” Johnson said. “She competes hard, communicates with her defensemen and reads the play well. Camille von Steinbergs is a strong skating defenseman with a heavy shot who is committed to Union next year. Emma Bigham is a senior forward who is committed to St. Cloud State. She is not only our leading scorer, but she is our best forechecker and leads by example.”

Those seniors have grown up in the Skippers’ program, and their willingness to continue to play the game and ability to improve encapsulates Johnson’s philosophy.