A Quick Look at HOCKEYTOWN USA

Facts on Why Warroad is HOCKEYTOWN USA

Facts on Why Warroad is HOCKEYTOWN USA

From the outside looking in, there is something special about the town of Warroad. Not only was it once one of the largest Chippewa villages on Lake of the Woods, but it now boasts the title of Hockeytown USA®. With names like Bill Christian, Cal Marvin, David Christian, Gordon (Ginny) Christian, Roger Christian, Dan McKinnon, Gigi Marvin, Henry Boucha, T.J. Oshie, and Brock Nelson in their lineup, 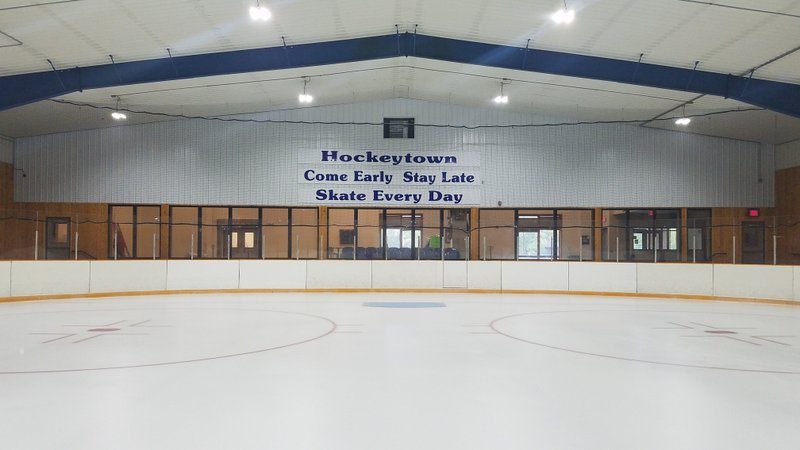 Warroad must be doing something right. But, what makes the old “war road” from which the river and village derived their name different in regards to hockey?

A volunteer from Hockeytown USA® shares how Warroad is a force to be reckoned with:

In the medal round of the 1960 Olympics, the United States men’s team defeated the Soviet Union 3-2 with Bill Christian scoring two of the three goals and his brother, Roger, getting both assists. In the next game that clinched the gold medal, Roger scored four goals and Bill got three assists. From that moment on, Warroad became Hockeytown USA.

So how does a tiny community on the Manitoba border maintain such a lofty claim for almost 60 years? I am going to share some of our hockey history that will answer that question and then give you an insight as to what we are doing now to make sure that this tradition of excellence continues.

In 1949, Warroad’s Memorial Arena was built. Native lumber was planed at the Marvin Lumberyard and thousands of 1-inch boards went into building the rafters and the roof. Finally, Warroad hockey was inside.

1965 – Roger and Bill Christian played in their second Olympics

1965 – Cal Marvin was chosen to manage the US National Team for the World Championship in Oslo, Norway

1969 – State HS hockey tournament, Championship game between Warroad and Edina. Over 16,000 fans on their feet cheering Warroad and the electrifying Henry Boucha

1972 – Henry Boucha made the Olympic team, won a silver medal, and soon after joined the NHL.

1980 – David Christian and His teammates shock the hockey world with a Lake Placid gold medal. A week later David came home, school was let out and [Warroad] packed the Memorial Arena to honor him and watch him sign his NHL contract.

Our high school boys team has kept Warroad in the hockey headlines with 21 state appearances and four championships. Our girls team, which started in 1998, has been in the state tournament 8 times and have been state champions twice. Over 70 boys have played division one hockey and 10 of our girls have received scholarships to division 1 schools.

2010 – Gigi Marvin made the Olympic team

2013 – Brock Nelson, David Christian’s nephew signed with the NHL’s New York Islanders where he excels with them and US National teams

2014 – Both Gigi and T.J. participated in the Sochi Olympics and the national media had a field day with these two Warroad high school classmates

Every highlight, every accomplishment that I just described had a common thread – a foundation – connecting them all. That foundation was the Warroad Lakers. The Lakers were an amateur team that entertained fans for over 50 years. A team that was so successful that their name was synonymous with excellence in Canada and the US. In Canada, because that is where the Lakers competed and played for championships from British Columbia to New Brunswick. Their success is honored by Laker jerseys and sticks and records in the Canadian Hockey Hall of Fame in Toronto.

Fame on our side of the border was achieved by the repeated presence of US National and Olympic teams that came to play in our town. They came to Warroad for three reasons: their relationship with Cal Marvin, their relationship with the Christian family, and the opportunity to play the Warroad Lakers. Through USA Hockey, we have been able to host the visiting national teams from Germany, Norway, Sweden, Finland, Japan, Czechoslovakia, and most recently, three visits from the women’s national team.

For every Warroad High school boy that had a dream of playing college hockey, the Lakers offered a special opportunity for development. Our talented skaters were welcomed at Laker practices and rewarded with a spot on the team for playoffs.

The best example of this is what occurred in 1976, when David Christian joined the Lakers for the playoffs. David played on a team that won the Manitoba Championship, then beat the Saskatchewan representative, then followed that by eliminating the British Columbia winner and flew to New Brunswick to play for the Canadian title. David was the team’s leading scorer and, most significantly, played on a line with his dad, Bill Christian. For a hockey dad that has a hockey son, I cannot imagine anything more perfect.

So what is Hockeytown doing today to continue this legacy? We are fortunate to have people on our Arena and Youth boards that had a close connection with the previous generation that provided us with such beautiful facilities and a commitment to the game.

There were many that gave their time, but I would like to mention three: Cal Marvin, who was the Arena Board president and Youth Hockey President for 50 years. Bill Christian, who served on the Arena Board during the construction of both our arenas and was our town’s Bantam coach for years. There is a photo in our adjoining arena that honors Roger and Bill. It doesn’t reference any game they played or goals they scored. It is there as a tribute to two men, who for 30 years, led the volunteer crews when work had to be done at the arenas. This included: new locker rooms, a press box, installation of artificial ice, new dasher boards, a new lobby, whatever was needed.

Those of us that serve Warroad hockey do so with the greatest respect for these men and the others that worked with them.

Mike Marvin, a long time youth hockey coach, shared with Minnesota Hockey Magazine what makes Warroad hockey unique:  “First – We are very proud of Warroad’s Indian heritage and the many Native coaches and players in our program. For instance, last year there were six Native players on our Pee Wee team competing in the State Tournament.

The second thing that makes us unique is that each player can attend the practices of every team in town.  Girls can attend boys’ practices and boys are welcome to skate with the girls; young kids skate with the older kids and vice versa. I don’t know of another town where this occurs.

And finally and most important: ice time in Warroad is free. There is no hourly charge to players or families like in other communities. There is a huge sign in our Olympic Arena that says:  HOCKEYTOWN — COME EARLY — STAY LATE — SKATE EVERYDAY.  This is the message that we preach to the kids and their parents.

We are trying to teach them what came natural to Henry Boucha and David Christian; we want them to live at the rink like T.J. Oshie and Gigi Marvin did.  We offer unlimited ice time and know that if they use it, Warroad will continue to produce skilled players and continue the legacy of Hockeytown, USA.”

It is clear that Warroad cares about each individual player. From the time they first learn to skate, girls and boys alike are given the same opportunities to succeed. The history of Hockeytown USA® will forever live through the game. The memories made in the locker rooms, on the ice, and in the homes of the community. Make no mistake, Warroad hockey is here to stay.

Jordi Tiffany is the social media director for Minnesota Hockey Magazine. A graduate of the University of North Dakota, she enjoys spending time with family and friends.