‘The Quiet One’ Makes Noisy Return 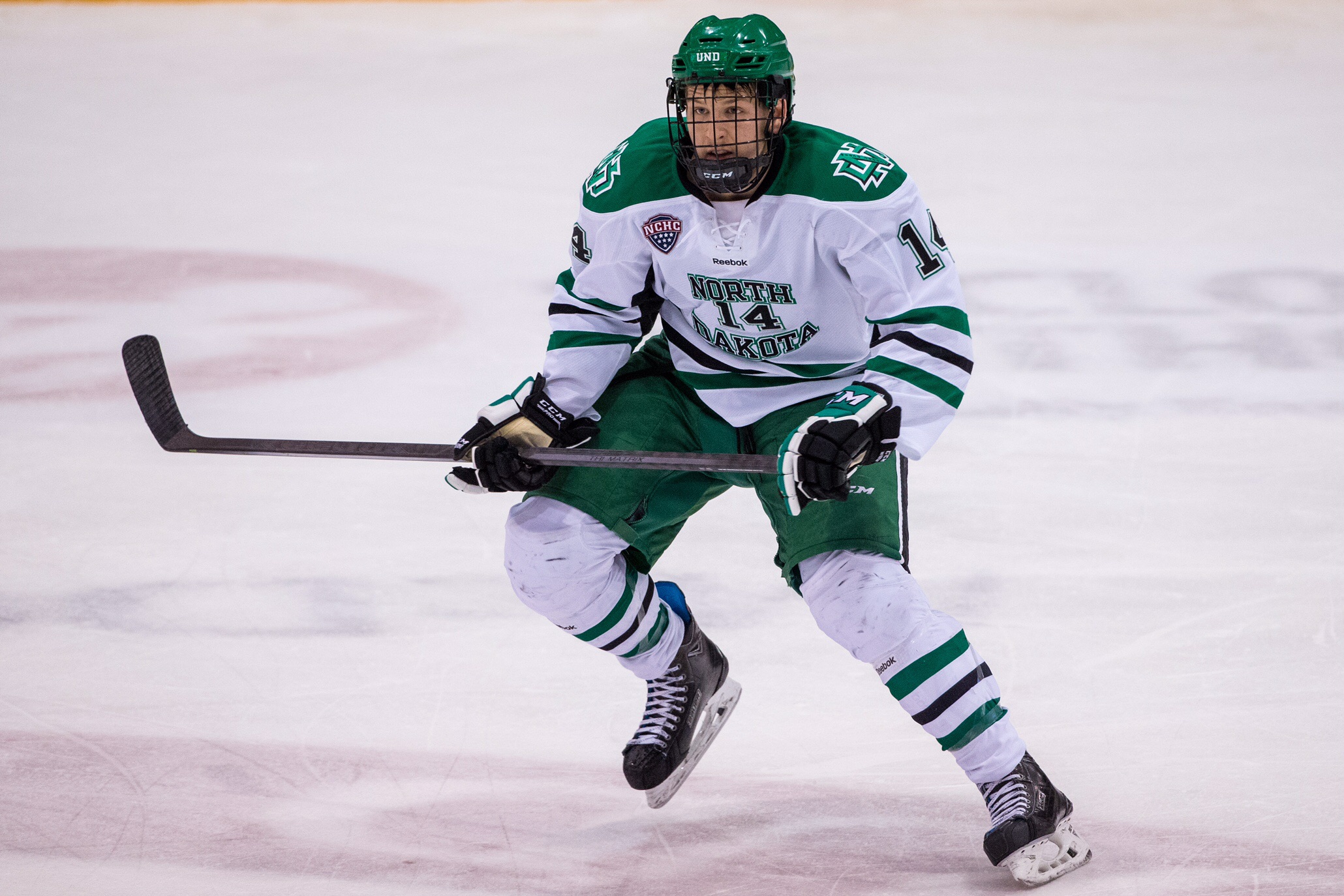 ST. CLOUD – Austin Poganski is not the type of guy to make a big deal about his own accomplishments.

In conversation, he likes to step outside the spotlight and give the attention to his teammates and coaches.

It may have been more of a challenge for the North Dakota freshman to stay out of the spotlight playing in front of family and old high school teammates in his first return to play in his hometown of St. Cloud.

Poganski remained in the focus of everyone in the building Saturday night thanks to his ability to distribute to the guys on his line.

Poganski set up two of UND’s goals, including the game-winner in the second period in North Dakota’s 3-2 win Saturday at the Herb Brooks National Hockey Center.

Fellow freshman Trevor Olson, a Duluth native, was on the receiving end of Poganski’s assists. They were the first two goals of Olson’s career and on his birthday.

“I just came out of the corner and got it to (Troy) Strecher and he made a good play on the net,” Poganski said about Olson’s first goal. “The goalie popped right out and Olson put it in so it was a good effort by our whole line.”

“Obviously, Pogo’s from St. Cloud so he had a little extra buzz tonight,” Olson said. “He’s just a hard worker and does everything right. He doesn’t make mistakes and does his job.”

Poganski has one goal and two assists in eight games played this season.

He and Olson are the wings on UND’s fourth line with Johnny Simonson. Olson didn’t play Friday, but was inserted into the lineup to replace Bryn Chyzyk at left wing.

“We had new lines tonight and we had new chemistry,” Poganski said. “We got the puck behind their defensemen and just went to work. That was kind of our game plan.”

Poganski played his high school hockey for St. Cloud Cathedral, during which, he was invited to play for USA Hockey in three international tournaments and twice led the teams in goals.

Poganski left Cathedral after recording 35 goals and 31 assists in 23 games as a junior. His early exit to play junior hockey was only one tough decision he had to make. So was his college choice.

Austin’s grandpa Roger had season tickets since the construction of the National Hockey Center in the late 1980s and Rick was a season ticket holder until Austin got to the high school age.

“I followed SCSU all my life so Austin going to North Dakota was his decision,” Rick Poganski said. “He asked me ‘Dad, where do you think?’ and I said ‘remember, if hockey doesn’t work, you’re going to school so pick a place you want to go to school’.

“Austin loves St. Cloud, but he doesn’t like crowds. He wanted to get away. He always wanted to be the quiet one.”

So Austin left St. Cloud, which according to Rick, allowed him to get away from the attention he earned in high school and blend in with the UND roster.

Rick Poganski and his wife Kim haven’t missed a game in Grand Forks this season and they went to watch him a few weeks ago in Bemidji.

Austin’s parents, grandmother, relatives and former teammates awaited him in the concourse after the game.

“I still have to pinch myself because for Austin, this was his dream and it came true,” Rick Poganski said. “We’re all proud of him, but my father was his biggest fan. He’d be the most proud but he’s not with us anymore.”

Poganski will get more opportunities for future homecomings, with trips to St. Cloud on North Dakota’s NCHC schedule once per year.

“I did get a little time to spend with my family this weekend but unfortunately, I didn’t get to go home at all,” Poganski said. “I played a lot of youth hockey in this building so a lot of memories here.”