Greenway’s revival tour rolls on into rematch with Mahtomedi 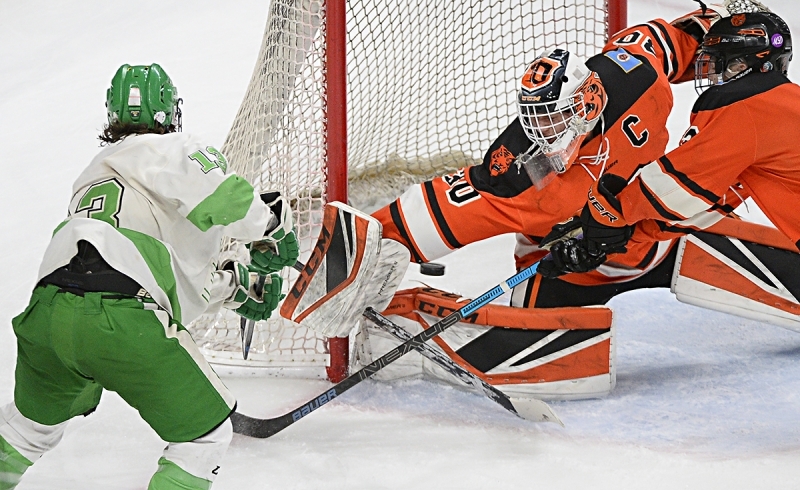 Greenway’s Donte Lawson scores the first of his two goals in the second period of the Raiders’ 6-4 state quarterfinal win over Delano on Wednesday night at Xcel Energy Center. (Photo by Tim Kolehmainen / Breakdown Sports USA)

Greenway’s revival rolls on into rematch with Mahtomedi

St. Paul — Trailing Delano 3-1 after the first period of their state quarterfinal, coach Grant Clafton and his Greenway/Nashwauk-Keewatin Raiders were in familiar territory having spotted Hermantown to a 2-0 lead a week ago in the Section 7A title game.

“These games in my opinion they have mirrored our whole season. You’re down 2-0, you’re down 3-1, it’s a weird feeling to have and I really believe that our player have it but I just don’t think that we’re out of any game at anytime because they just have a killer instinct that and they just keep going.”

As they did against the top-ranked Hawks last week, the Raiders stormed back to defeat the Tigers 6-4 in a wild see-saw contest in what was by far the most entertaining of the day’s Class 1A quarterfinals.

“Greenway did an excellent job of getting pucks through from the point, utilizing the NHL-size zone and the higher blue line made it difficult for our wings to get in the lanes,” Delano coach Gerrit van Bergen said. “The angles changed compared to what we’re used to.”

Greenway leading scorer Donte Lawson, who notched his 28th and 29th goals of the year on Wednesday and added a pair of assists, said the Raiders maintained a positive attitude in locker room in the first intermission which they brought with them onto the ice.

“Sticking together like we always have throughout the year,” Lawson said. “We’ve battled through enough adversity where we knew what we had to do and that’s what we did.”

“We came in after the first period down 3-1 and there was no doubt,” Clafton added. “We had guys joking in the locker room.”

Second-period goals by Lawson and Ben Troumbly tied the score heading into the final period but Delano’s Kory Dunnigan scored his second of the game 7:23 into the third to lift the Tigers back to a 4-3 lead with under 10 minutes to play. But goals by Mitchell Vekich and Christian Miller 53 seconds apart restored Greenway’s lead and Lawson’s empty netter sealed it with 34.5 seconds to go.

“Their forwards are relentless around the front of the net to create traffic and get sticks on pucks,” van Bergen said. “We saw it on film, we saw it when we played them.”

The game was a microcosm of a Greenway season which saw the Raiders stumble to a 6-13 start before rattling off what is now 10 straight wins and storm into a state tournament berth which seemed unlikely two months ago. Delano contributed to that tough start on Dec. 28 with a 4-3 win over the Raiders.

“This is a chance to right a wrong,” Clafton said. “We went through some tough times for about six solid weeks and they were part of that group of teams that was taking it out on us.”

When the idea was floated that perhaps the Raiders could play four games this week, Clafton responded without hesitation, “Fine by me.”