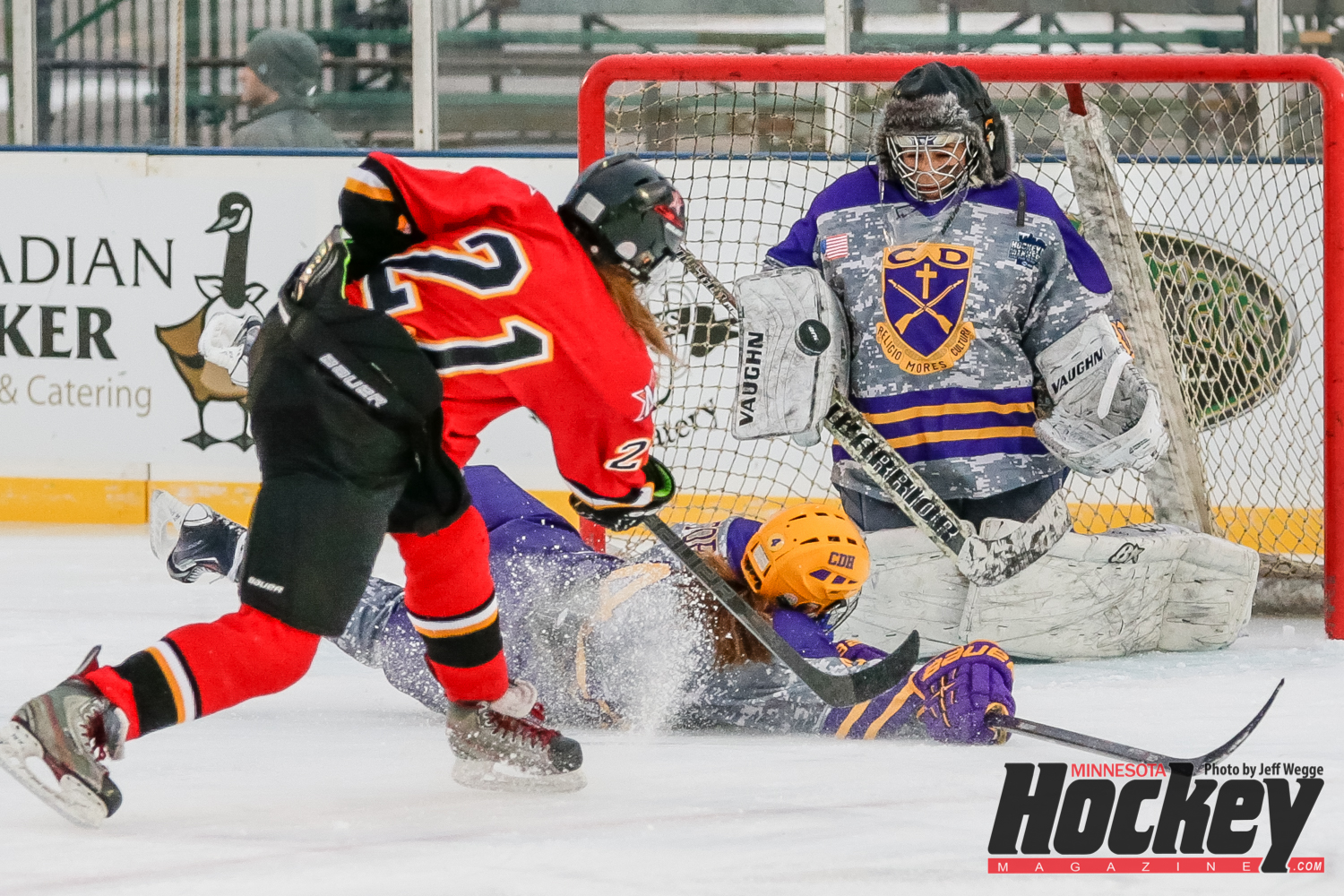 On paper it was a mismatch. At 13-3-3 and undefeated in the Suburban East the Cretin-Derham Hall Raiders’ girls’ hockey team looked like they should have no problem with their opponents from up north. The Duluth Northern Stars came into their Hockey Day Minnesota match up with a 7-9-3 record.

Just six seconds into the game at Holman Field it looked like mismatch was not just on paper. The Raiders’ Rosie Pitera forced a turnover at the Duluth blue line and beat the goalie on the short side to give the 11th ranked Raiders an early 1-0 lead.

The Raiders had the better of the play early and late, but Duluth made the most of their chances in between. The Northern Stars were able to get traffic in front of the net to score the next two goals. Ana Kunst tied the game at one when she banged in a rebound. Then Bri Stafne gave Duluth a short lead when she was able to tap in the puck during a scrum in front of the CDH net.

The Raiders’ speed was on display the rest of the period as a nice skating play by Anna Klein created a scoring chance on the door step for Paige Voight. The senior buried the puck to tie the game at two and Klien took matters into her own hands and just beat the buzzer when she scored with five seconds left in the period. The goal gave the Raiders a lead they would never relinquish.

The ice seemed to be tilted toward Duluth goalie Kalei Kleive for much of the second period as the CDH fore-check caused problems for the underdog Duluth squad. Kleive and her defense were able to hold off the barrage for most of the period until Klein finally beat the Northern Stars’ net minder by getting loose in front of the net to score an unassisted goal to make the score 4-2.

Just like in the first period, Duluth didn’t have many chances, but they made one of those chances pay off. Great skating and puck handling by Stafne set up teammate Ava Meyer on the doorstep and the junior forward did the rest – keeping her team within striking distance of the Raiders.

The now familiar pattern continued in the third period. The Raiders controlled much of the play. Mid-way through the period it looked like the Raiders had finally put the game away when Annie Boeckers grabbed a loose puck, had nothing but open ice in front of her and put the Raiders ahead 5-3.

Just when it looked like Raiders’ fans could relax Duluth struck again. Stafne got on the score sheet again with a great pass to Avery Ziegler. Ziegler made sure the nice passing play paid off and cut the lead to one with a minute to go.

With Kleive pulled, Duluth’s final rush up the ice nearly tied the game as a shot from the high slot just missed the net with under five seconds to play.

What looked like a mismatch was not a mismatch at all. Duluth played a great game as a big underdog, but in the end the Raiders had too much speed and talent for the Northern Stars and held on for a 5-4 win.