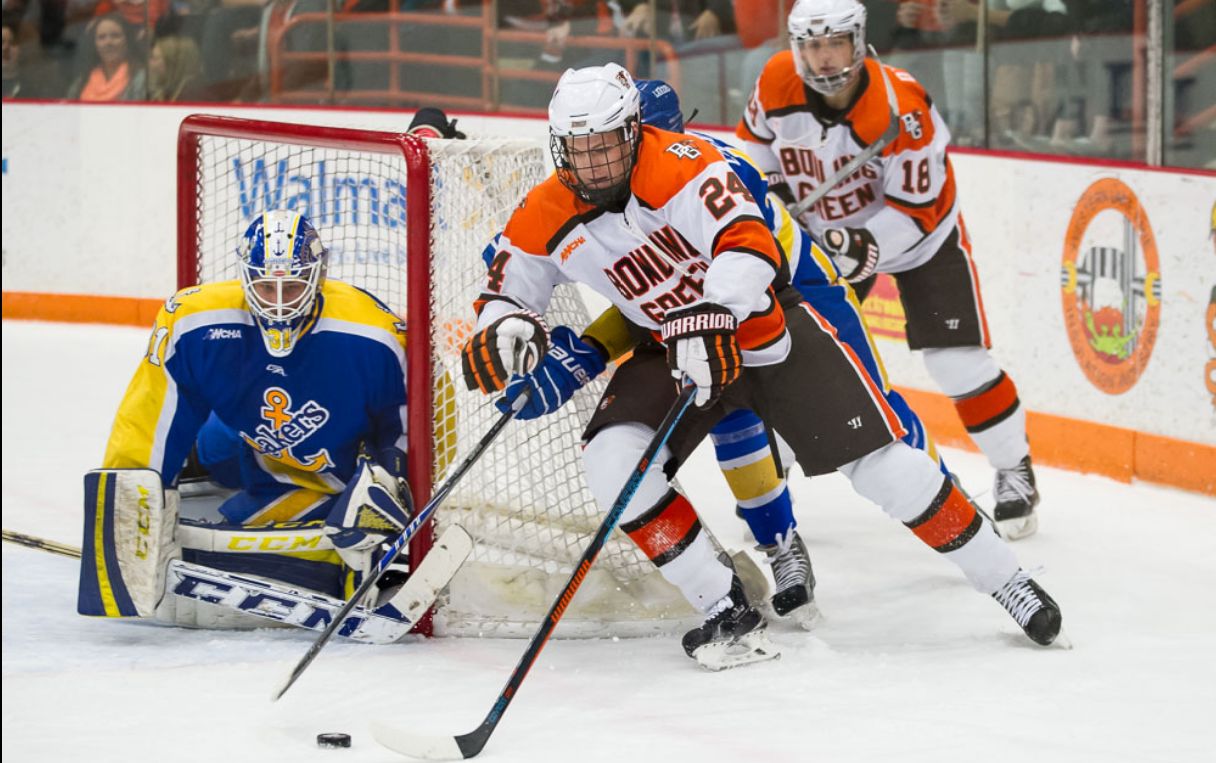 Gordy Defiel stares down the puck in a recent game at Bowling Green. (Photo: Todd Pavlack/BGSUHockey.com)

Seemingly, not a day goes by that Gordy Defiel doesn’t get teased about his high school mascot.

The former Stillwater Pony deals with the taunts in the locker room about his incredibly non-threatening mascot, but when the netminder steps onto the ice, it’s all business.

After a pit stop in the Superior International Junior Hockey League and the British Columbia Hockey League each, Defiel is in the midst of his freshman campaign at Lake Superior State University and is already making a splash for the Lakers.

On two occasions, the netminder has picked up Western Collegiate Hockey Association Defensive Player of the Week honors — the first after stopping 67 of 68 shots against Cornell and Notre Dame in the Florida College Classic in December and the second in January following a 76-save weekend as the Lakers swept Bemidji State. Defiel made a career-high 44 saves in the series opener and picked up a 1-0 win for his third shutout of the season.

“It’s a little easier to go into a game after getting a WCHA Defensive Player of the Week honor,” the freshman said. “It just feels good to get rewarded for success and all the hard work that we put in.

“It feels good to get individual honors but in all reality, our team has been playing great lately.”

Lake Superior State Head Coach Damon Whitten, who is in his first year with the Lakers, was quick to note that Defiel’s play this season has set a standard going forward. Only a freshman now, he’s expected to step up his game in the coming seasons.

“He’s set a very high bar for himself,” Whitten said. “We have a few weeks left here where we want to finish on that note, but the expectation is certainly that he improves off what he’s already built. There’s probably a good, healthy pressure on him to have a great summer after this season — to come in at an even higher level, ready to elevate the position even more.”

Even having the chance to set that bar high was something Defiel wasn’t completely expecting. Coming into the year, he hoped to get some decent playing time, to get into a few games and show what he could do. But as only a freshman, he did not anticipate earning the starting role between the pipes.

Whitten even noted that the coaching staff didn’t know what to expect from the young goaltender. When they hit the ice at the beginning of the season, they knew he had a championship on his resume, but his work ethic and readiness to play made him stand out from the rest.

“One thing that really struck us about Gordy is that he’s taken a couple teams very far in the playoffs and won some championships,” Whitten said. “We like the way he fought and improved and has gotten his team to a championship level. We didn’t have a ton of knowledge or expectations but certainly have been pleased since he’s gotten here; he’s done an unbelievable job and really solidified the position for us.

Whitten added that Defiel, who was also named WCHA Rookie of the Week in November, has been good since day one and given the young Lakers team a chance in most of their games.

Prior to LSSU, Defiel spent the 2013-14 season with the Coquitlam Express of the BCHL. After putting up a 20-21-1 regular season with a 3.69 goals-against average and a .887 save percentage, the Stillwater native led the Express to the league championship with a 14-5 run in which he put together a 2.69 GAA and .922 SV%.

Now at the collegiate level, the 6-foot, 197-pound youngster has played at consistent level all year long, according to Whitten. While he’s improved as the season has progressed, the Bench Boss noted he’s gotten more dialed in and sharper in some areas of his game. In 26 starts and 27 games played, Defiel has put together a 3.15 GAA and a .913 SV% with a 7-19-1-3 record.

Defiel admitted he’d like to have more wins on the season, but simply getting the chance to play every night has surpassed his expectations.

“I just wanted to come in and work really hard,” Defiel said. “I just wanted to get in some games and play well. I wasn’t expecting to play as much as I am. But I’m pretty thankful I’ve gotten the opportunity to play this much, that’s for sure.”