Ready To Take The Lead

Julia Tylke has found her comfort zone in St. Cloud 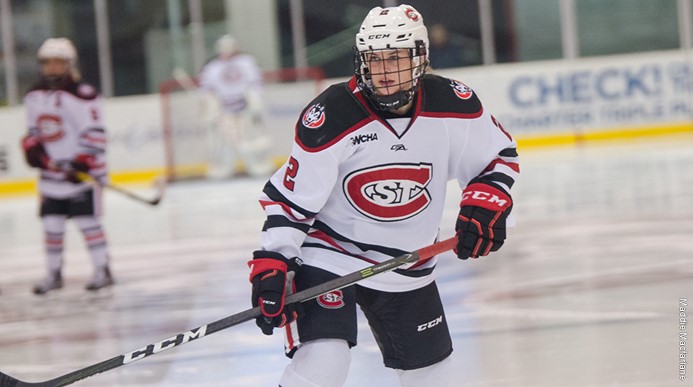 Julia Tylke has found her comfort zone in St. Cloud

It has not been an easy path for St. Cloud sophomore Julia Tylke. She battled depression in high school and almost didn’t get to play her freshman season because of NCAA rules. But one year after coming in second on the team in scoring, she’s leading the Huskies and sees a bright future for the program.

“Way different start [to this season]. I have none of the nerves I had last year,” she said following a weekend sweep at the hands of the Gophers. “When I was younger I played on teams [that were underdogs]. I played in an organization that was lower on the leaderboards and by the time I left we were competing at the top of the nation. I kind of like that position because it forces you to go outside your comfort zone and to really push yourself and your teammates. I like it a lot.”

Only 10 games into the season, her seven goals and nine points are both high-water marks for the Huskies. They’re also a sign of the kind of leader she has become. She admits to being a quiet leader who leads by example, but there’s no doubt she’s setting an example. “This summer, I really worked on what was working for me and what wasn’t, just building off of that,” she says. “I think it’s really translating well this season. I’m trying to keep that up.”

Her positivity isn’t just about the play she’s shown, but the team as a whole. St. Cloud entered the season having lost important senior talent, including leading scorer Molly Illikainen. “We did lose a lot, but I feel like we’ve got a lot of young players who are going to be moldable into great hockey players,” she says. “We’re off to a good start and a lot of our freshmen are stepping up and they’re going to be the future of the program. I think they’re doing very well right now.”

The Huskies occupy a difficult middle ground in the WCHA, arguably the nation’s toughest conference. They’re good enough to take a game from some of the conference’s best, like North Dakota and Duluth. And they’re a step above the teams at the bottom like Minnesota State and Ohio State, but it’s a tough conference to climb. The Badgers and Gophers have been ranked number one and two in the nation since the first preseason poll of the year.

“We’re definitely a team that has to build off what we have as of right now,” Tylke says. “We’re the underdogs.  We really have to step up this year. Already we’re doing a lot better than we were last year on the bench positivity-wise. Behind the scenes, everyone is putting in a lot of extra effort to be a better team than we have been in the past.”

Tylke is leading the way in her second season. Between her and freshman goaltender Janine Alder, who is off to an incredible start with a .939 save percentage and 1.84 goals-against average, they’re showing the framework for success this year and into the coming seasons.

Tylke is taking the lessons she learned as a freshman, helping the program to grow. “I’m just trying to do what I did last year, but to take it a step further. I definitely try to be a leader and try to keep my cool. I try to put in that extra effort, offering help to some of the freshmen if they want it.

“I learned a lot from Molly [Illikainen]. She was a really great leader,” Tylke says smiling. “If I had any questions, she went above and beyond to explain it so I got it and would try new things with me, really put me in my comfort zone, especially in the second half of the season. Having a leader like that was very comforting, because, as a freshman, it was very nerve-wracking to be where I was.”

Though the Huskies are still hoping to see more goals from some of last year’s top offensive producers, the underclassmen are a source of hope for the second half of the season and beyond. Freshman Brooke Kudrika has shown fantastic speed and an offensive game ready to bloom, as has sophomore Hannah Potrykus. They’re building the framework of a team capable of surprising expectations, even if the cards are stacked against them, for now.