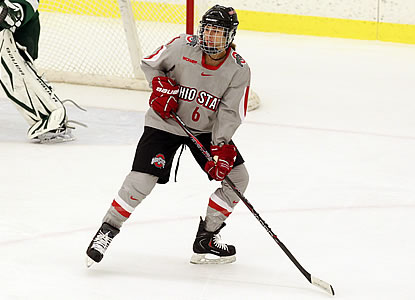 With four goals and an assist last weekend to help her Ohio State Buckeyes to a sweep of visiting Bemidji State last weekend, sophomore forward, Taylor Kuehl (Minnestrista, Minn.) was named WCHA Offensive Player of the Week. Kuehl, who registered nine shots and was a +4 plus/minus in the series, is heating up now with six goals in her last four games and 10 points (8-2–10) in 10 games this season.

Minnesota defenseman Milica McMillen scored once in each game of the Gophers’ sweep at North Dakota last weekend and added an assist while helping limit UND to 40 total shots in the series. All that adds up to WCHA Rookie of the Week for the freshman from St. Paul who sits tied for second in overall scoring among WCHA defenseman with 11 points (5-6–11) through 10 games.

Wisconsin junior goaltender, Alex Rigsby was recognized as WCHA Defensive Player of the week after leading the Badgers to a sweep at home of New Hampshire by stopping 50 of 51 Wildcats’ shots.

Heading over to the polls …

After last weekend’s sweep of North Dakota in Grand Forks, Minnesota’s extended its run as U.S. College Hockey Online’s consensus No. 1 team in the nation to a fifth straight week to open the season. North Dakota drops one spot to No. 9 while Ohio State, after a one-week hiatus from the top 10, climbs back in at No. 10. Wisconsin (12) and Minnesota-Duluth (11) each received votes this week but, following a pair of losses to No. 5 Mercyhurst, Minnesota State falls from the 10th spot without receiving a vote.

Congratulations go out to Providence senior forward, Nicole Anderson (Jordan, Minn.), as the recipient of this week’s Hockey East Player of the Week award. According to a Hockey East press release, Anderson tallied five points on the weekend (3g,2a), including a hat trick and an assist in the 4-2 win over St. Cloud State on Sunday. During Saturday’s game she tallied an assist on the tying goal with 19.2 seconds left in the game. She finished the weekend with 14 shots on goal and a +3 plus/minus rating.