New columnist Jasper Kozak-Miller spotlights a few of the state’s top uncommitted recruits in Part 1 of a series. 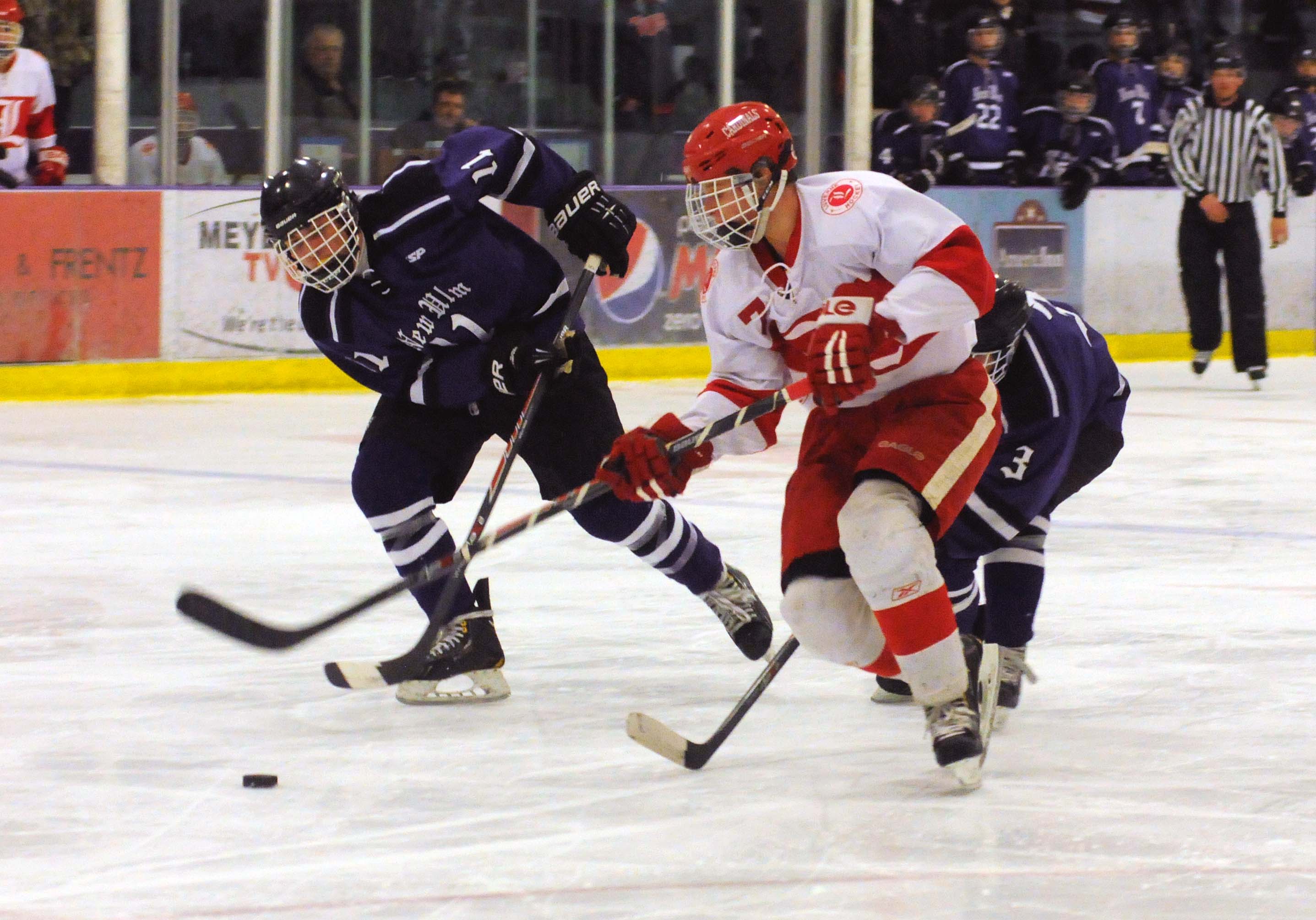 Luverne’s Jaxon Nelson escapes a pair of New Ulm defenders on his way to registering a hat trick in the Cardinals’ 6-1 win over the Eagles in the Section 3A final to give Luverne its first-ever state tournament berth. (MHM photo / Jordan Doffing)

New columnist Jasper Kozak-Miller spotlights a few of the state’s top uncommitted recruits in Part 1 of a series.

Hi, I’m Jasper Kozak-Miller and I’m excited to say I’ll be joining Minnesota Hockey Magazine’s team this season. I spend a lot of my time watching and writing on players around the country for Over The Boards and when the chance came to work with MHM, highlighting the recruiting scene and some of the State of Hockey’s best and brightest talent in the process, it was a no-brainer. I’m looking forward to getting to know not just the writing staff here but also the readers: you can reach me through the comments section here or on Twitter.

With recruiting likely coming into full swing this September, attention of recruiting staffs across the state (and all of D1) will shift to many of America’s top sophomores (born in 1999!) though Minnesota still has a few key older players in the junior class that remain uncommitted heading into the fervor of recruiting season. For my next few articles through the early fall, I decided to highlight some of those older players, as well as some younger ones who could step into the spotlight. 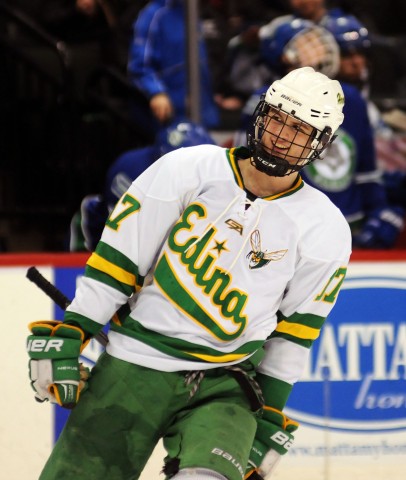 The first is Garrett Wait, a junior returner at forward for the reigning champion Edina Hornets. Wait, the last to commit of a group of super sophomores who tore it up for the Hornets this past winter (Kieffer Bellows – BU, Ryan Zuhlsdorf – Minnesota) had a pretty good summer. For a sophomore who started the high school season off with five points in two games, including 2-1-3 in a 3-1 win over Lake Conference rival Wayzata, and closed its last weekend out with four points and a state championship, you might assume there would be nothing left in the tank. Not in Wait’s case: after making it through the extensive process to National Camp in New York this spring, the Hornet was far from just happy to be there, quickly racking up 16 points (seven goals) in 6 games and leading the entire camp in scoring.

That was good for a roster spot to travel and play in Germany this August at the Five Nations U17 alongside numerous Minnesotans and some of USA’s top prospects. True to form, Wait added four goals and four assists through four games in an effort that won the US Bronze. That production sums up a lot of what makes Wait so valuable as a potential recruit; he’s an uncannily consistent scoring threat whose hockey sense helps to identify dangerous parts of the ice where he can capitalize with a sharp pass or by showcasing a slick scoring touch. Back with the Hornets for his junior year, Wait will likely have a number of recruiters following him around the Elite League this fall.

Another junior who could draw a lot of eyes this winter is Hill-Murray defenseman Casey Staum. The Pioneers defensive corps already had two of the better prospects in high school with rising senior draft hopeful Jacob Olson (Michigan Tech) and freshman rock Mikey Anderson (Minnesota-Duluth), but Staum returning for a junior year is a key, as the smooth-skating puck mover should emerge as a greater force at both ends of the ice. A likely candidate to powerplay the quarterback as well as to play key defensive situations this year, Staum brings steady, decisive play with strong ice awareness and passing ability – all traits he would bring with him to the Division I level.

In the 10th grade, arguably the top uncommitted forward in the country is a prominent young gun from Shattuck-St. Mary’s National Champion bantam outfit this past winter: Grant Mismash. An athletic, explosive sophomore from Edina who plays with an exciting flair, Mismash never ceases to keep things interesting on the ice. Whether he cracks the prep team in Faribault as a sophomore this September will dictate whether he makes it to Elite League action, but coaches from Division I looking to add a focal point to their offense in a few years will make the trip to catch Mismash, whatever team he ends up on. 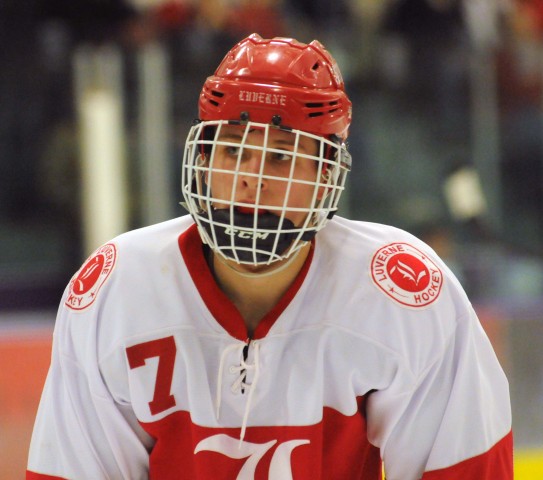 Last but not least for this time is a rising freshman phenom who made it to the state tournament as an 8th-grader this past spring, Jaxon Nelson out of Luverne High School. He’ll only be a freshman this fall, but at 6’1 and with 32 high school goals under his belt already, Nelson and his Luverne Cardinals are clearly well ahead of their peers in the Southwest conference. At an ideal size, Nelson is a very strong skater with overwhelming skill on the puck, though scouts will question his strength of schedule until he plays better competition. To Nelson’s credit, the Cardinals could certainly find themselves in the hunt for a Class A championship with their young core all a year older and ready to avenge this March’s shortcoming. Nelson is a likely Minnesota target as the Gophers have seen a number of well-framed forwards in the 1998 class land with competing schools and may not want to miss on this premier talent produced out of Minnesota’s Southwestern corner. If you want to catch Jaxon and some other of the state’s up-and-coming young talent before the season, many of them are playing in the summer Bantam Elite league, hosted in a number of metro rinks.

Born in NY, raised in New England, spent the last couple years getting to know the State of Hockey. Recruiting columnist at Minnesota Hockey Magazine and editor at Over The Boards, a college hockey recruiting site and scouting service. Follow Jasper on Twitter at @JasperKozak