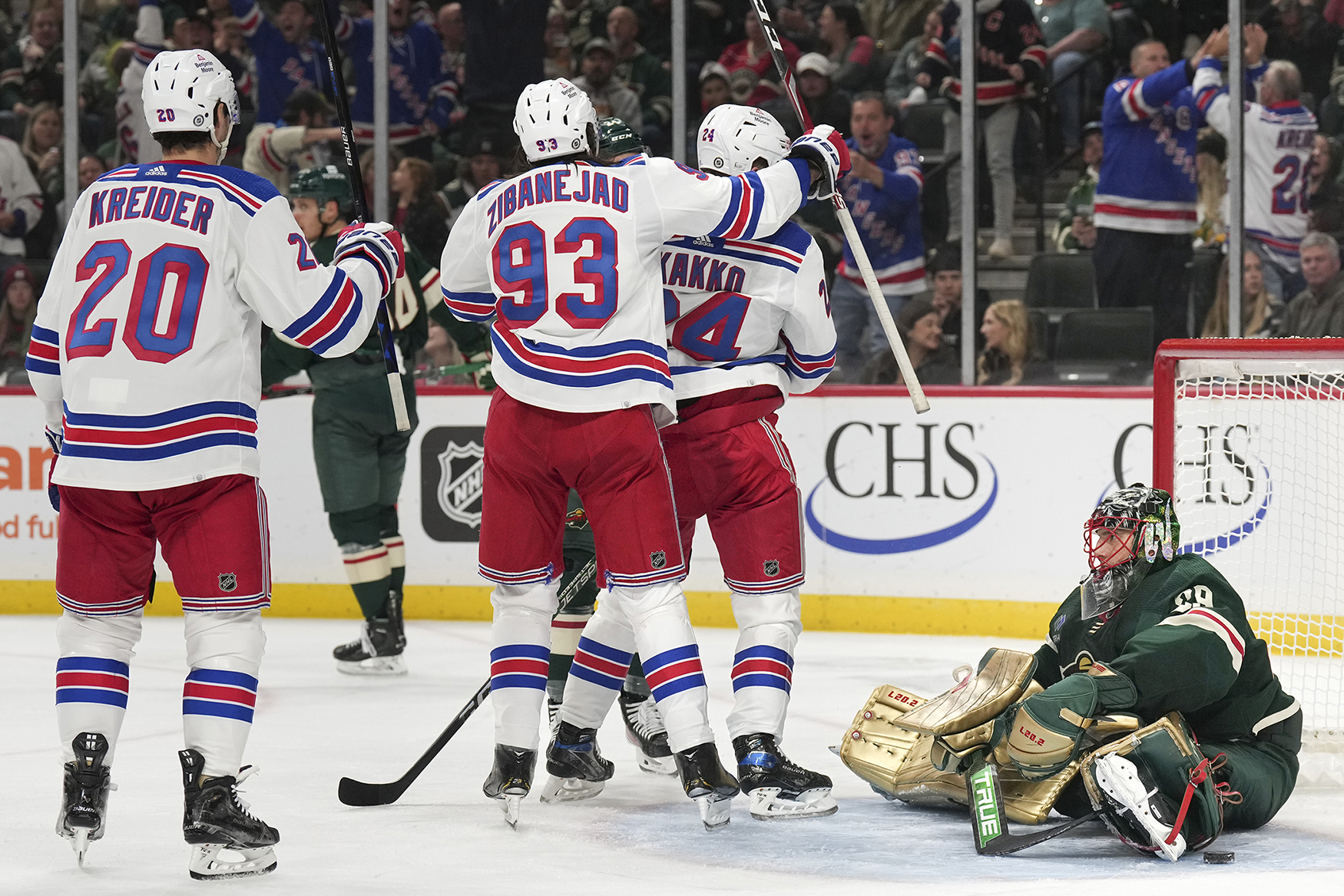 Scenes like this have become all too common in front of the Minnesota Wild crease through three games this season. (MHM Photo / Rick Olson)

The look on Marc-Andre Fleury’s face as he sat at his locker following the Wild’s loss Saturday to the Los Angeles Kings might have been more concerning than his performance. The future Hall of Fame goalie, three-time Stanley Cup champion and Vezina Trophy winner as recently as 2021, looked shaken, devoid of the confidence he has carried for much of his career.

Fleury had given up seven goals in a 7-3 loss to the Rangers on opening night at Xcel Energy Center, and now it was four goals on 14 shots in what became a 7-6 loss to the Kings. The final goal of the first period from Alex Iafallo came on a shot from the blue line in which Fleury had clear vision of the puck and still managed to allow it to get past him. Fleury, welcomed as a hero when general manager Bill Guerin acquired him at the trade deadline last season, heard a chorus of boos.

“I don’t blame them. I’d boo myself,” he said. “I was not good. I feel bad for the fans. I feel bad for my teammates. I’ve got to be better. I’ve got to step up and give our team a chance to win. There’s some tough goals. A few of them. Still, I’ve got to make some saves. Especially the stupid last one there.”

Fleury initially used a much stronger word in describing that goal before quickly apologizing. But the word he picked wasn’t nearly as offensive as the goal he allowed.

Wild coach Dean Evason, who despises lifting a goalie, much less a decorated one like Fleury, brought in offseason acquisition Filip Gustavsson in the second period. Gustavsson gave up the final three Los Angeles goals on 20 shots. Evason, not surprisingly, continued to say all the right things about Fleury, but he then made a decision that spoke volumes. 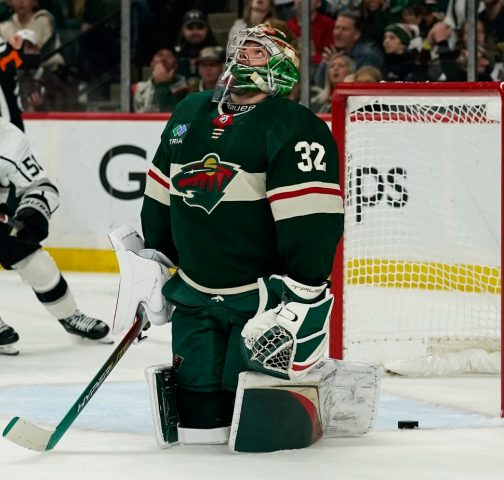 Divine intervention may be what it takes the turn the Wild’s goaltending woes around. (MHM Photo / Jeff Wegge)

Evason picked the 24-year-old Gustavsson to start Monday night’s game against the defending Stanley Cup champion Colorado Avalanche. It was a move that provided a clear indication of the Wild’s concern about Fleury having surrendered 11 goals in four periods.

The Wild played its best game Monday, but Gustavsson’s inability to stop the puck led to a 6-3 loss. The worst goal came with the score tied 2-2, when Nathan MacKinnon dumped the puck toward the Wild net from the neutral zone and Gustavsson failed to cover it. Mikko Rantanen swooped in and put the puck into the Wild net.

It was a back-breaking, can’t happen goal against a Wild team that is coming off a franchise-best 113-point season and is in desperate need of a lift. Of course, the fact Fleury wasn’t in net was the main story. The Wild’s goaltending struggles have provided some early-season “I told you so” ammunition for those who questioned Guerin’s decision to sign Fleury to a two-year, $7 million deal in July after he was less than stellar in starting the first five games of the Wild’s six-game playoff exit against the Blues last spring.

A week after Fleury signed, Guerin dealt disgruntled goalie Cam Talbot to the Ottawa Senators for Gustavsson. The hope had been that Fleury and Talbot could share the net, but Talbot was less than pleased with the fact he didn’t start against the Blues until Game 6 of the playoffs. Instead of having the luxury of splitting time between Fleury and the 35-year-old Talbot, Fleury became the main man in a season in which he will turn 38 on Nov. 28. (Talbot is currently sidelined for five-to-seven weeks because of an upper body injury.)

So far, Fleury has looked every bit his age and Gustavsson, who has made 24 career starts in three seasons, isn’t magically going to turn into a No. 1 goalie. The Wild does have 2020 first-round pick Jesper Wallstedt at Iowa of the American Hockey League, but the soon-to-be 20-year-old just arrived from Sweden and the Wild almost certainly won’t rush him.

Meanwhile, Evason will do his best to fend off the goaltending critics and hope that Fleury can get on track and the rest of his team can play a more responsible defensive game.

“Goals against is a concern,” Evason said when asked about the goaltending concerns. “It’s not on the goalie. It’s on the goalie. It’s on the defense. It’s on the forwards. It’s on the coaches. It’s on all of us. We’re giving up way too many goals. That’s not one that’s on an individual trait. Sure, we got some bad hops and bounces and situations or whatever. Have we let in a bad goal? Sure. Have we made frickin’ mistakes defensively? Absolutely. Have we not done things up the ice offensively? Sure. We’ve all done that. Have we made bad coaching decisions? Clearly we have. Otherwise we wouldn’t be 0-3. We’re all responsible. We’ll all be accountable, and we’ll get out of this together.” 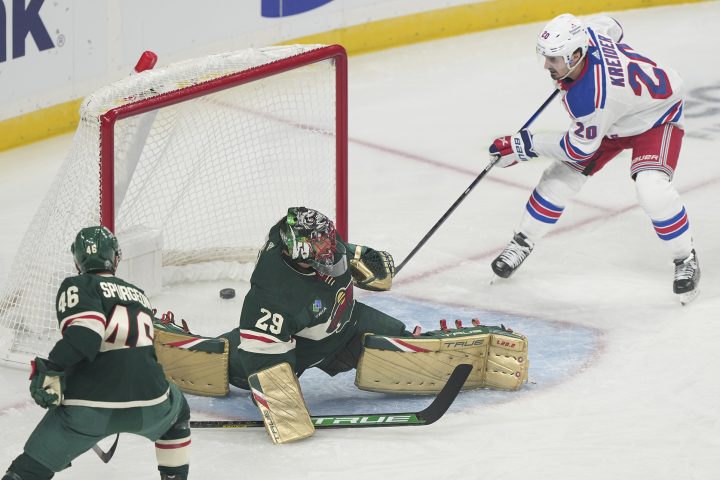 As bad as Minnesota’s goaltending has been, opponents have found no shortage of clear paths to the Wild net this season. (MHM Photo / Rick Olson)

The question is how soon? The Wild closes a four-game, season-opening homestand on Thursday night against Vancouver, having failed to hold a lead in 180 minutes of play and having given up an NHL-worst 20 goals (one empty-netter). Confidence is clearly lacking. There is no better way to get it back than for Fleury to come out and have a strong game against the Canucks before the Wild embarks on a five-game trip.

Otherwise, the concern that has begun to permeate Xcel Energy Center could soon turn into full-blown panic.