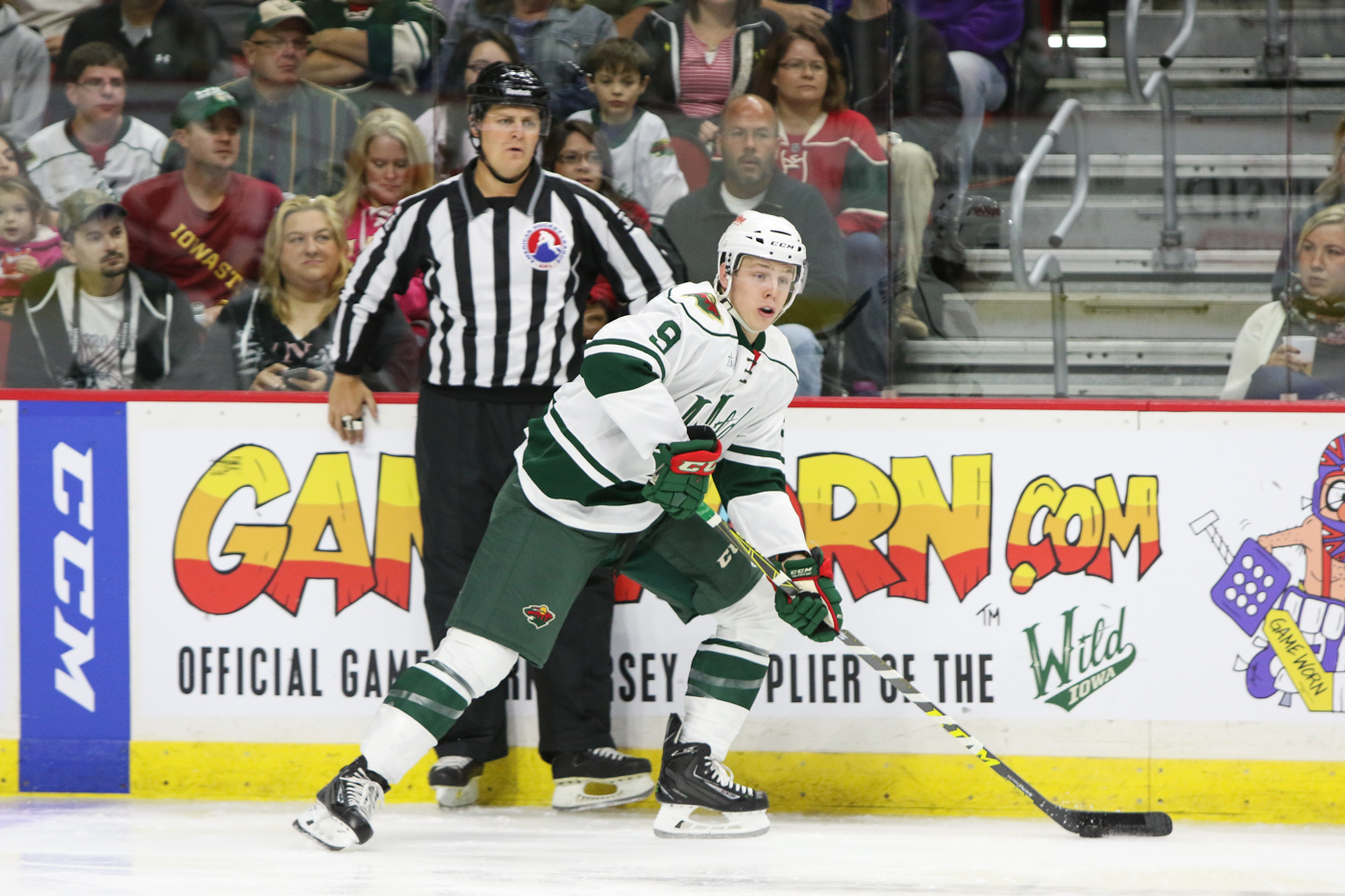 DES MOINES — In 39 games for the University of Minnesota last season, defenseman Mike Reilly had six goals. After just one game for the Iowa Wild, he already had one under his belt.

In the second period of his American Hockey League debut on Saturday, Oct. 10, the rookie defenseman scored on the power play to cut the Charlotte Checkers’ lead to 2-1 with 6:49 until the break. After passing back and forth a little with second-year pro and fellow defenseman Gustav Olofsson, Reilly fired a slapshot from the point and the puck went under the blocker of Charlotte goaltender Drew MacIntyre.

Reilly, who hails from Chanhassen, Minn., said that they hadn’t worked on the power play very much before Iowa’s first game of the season.

“It’s a little bit natural for me to go on the power play and move the puck around,” Reilly said. “Obviously you’re playing with great players and Olofsson gave me a nice pass there and (I was) just trying to get it through to the net.”

Two of his six goals and team-leading 42 points last season were power play goals for the Golden Gophers. He also led Minnesota with 116 shots on goal last year.

“Just like any first-year pro defenseman, it’s going to be a little bit of a transition,” Reilly said. “Going to main camp with the (Minnesota) Wild and getting some games up there too, I think it helped me a lot.”

During the preseason Reilly saw action against Buffalo in St. Paul, at Winnepeg and against Winnepeg at home. Against Winnipeg in St. Paul he logged 17:32 of ice time, including 3:33 on the power play, had two shots on goal, a plus-2 rating and two penalty minutes.

Iowa head coach John Torchetti said Reilly, a 2011 fourth-round pick of the Columbus Blue Jackets, and Olofsson, who hasn’t played since the beginning of last year due to injury, met his expectations in the first game of the season.

“I thought that Reilly and Olofsson, for their first game, they played really well,” Torchetti said. “Olofsson hasn’t played in a year and it was Reilly’s first pro game so they did a good job. You know, they’re going to get better and they’re going to be puck-moving defensemen.

“We’re going to get better in that aspect but I think, overall, we only had about five or six guys really playing the fast-paced game.”

While Reilly made a splash in the season opener against Charlotte with his first goal of his professional career, Iowa as a team didn’t fare so well as they dug themselves into a 2-1 hole in the first period and eventually lost 4-1 at Wells Fargo Arena in Des Moines.

The first Charlotte goal came just 4:57 into the new season when Charlotte’s Tyler Ganly flipped the puck high into the air from the neutral zone and Sergey Tolchinsky found it behind the Iowa defense and put it past Iowa goaltender Jeremy Smith.

The second goal came just two minutes later when Reilly wound up for a slap shot, but his stick broke on the windup, leading Charlotte’s Brock McGinn with a breakaway. He fired a wrist shot past Smith to give the Checkers a 2-0 lead.

After the season opener Torchetti said the difference between the teams was Iowa didn’t come out prepared, but admitted that the first two goals by Charlotte were “tough.”

“One was off a broken stick, not much you can do, and the other was on a flipped puck and we have to take stick-on-puck and then the body but didn’t so that’s two goals I know we can fix there,” Torchetti said.

He said no adjustments were made after the first period, but that they just needed to “compete” better.

“We didn’t compete,” Torchetti said. “I’ve got to do a better job, I guess, right off the bat. We shouldn’t have to worry competing first night at home, that’s for sure.”

In the second game of the home stand on Sunday, Iowa kept things much closer as they were tied 1-1 after the first period and had a 4-1 lead 3:31 into the third period. The Checkers came back, however, and eventually won the game 5-4 in a shootout leaving Iowa still winless after two games this season.

Iowa forward Brady Brassart had two goals and one assist, Christoph Bertschy had one goal and one assist and Jordan Schroeder, who was reassigned to Iowa for the second game, had one goal. Veteran forward Ruslan Fedotenko had two assists in the game and Olofsson and Michael Keranen had one each.

Torchetti emphasized that they have to play better at home this year than they did last year. Iowa was just 10-26-1-1 in 38 games at home last season.

Smith made his Iowa Wild debut last weekend, starting both games. He has allowed eight goals so far and has stopped 79-of-87 shots for a .908 save percentage.

The Wild continue the season this Friday and Saturday night as they hit the road for Cleveland to take on the Lake Erie Monsters. After that the Wild return home for a Tuesday night game against the Milwaukee Admirals and then hit the road again for a game at Rockford the next night.