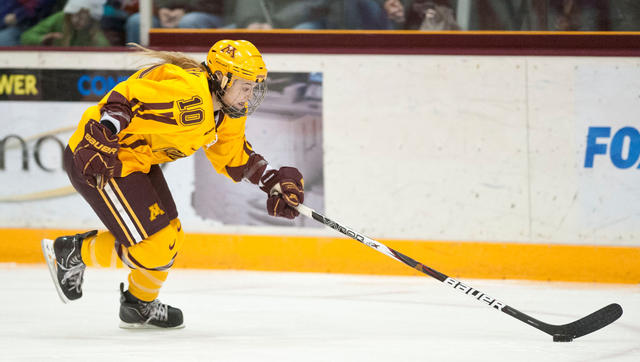 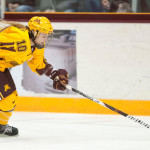 In what was supposed to be single winner-takes-all game to advance in the NCAA tournament, the undefeated University of Minnesota women’s hockey team and their North Dakota counterparts played what nearly amounted to a two-game series in a span of less than five hours on Saturday night at Ridder Arena.

When Gopher junior forward Kelly Terry’s shot found its way through UND goalie Shelby Amsley-Benzi with just 1:09 to play in third overtime, it ended the longest game in program history while lifting Minnesota past North Dakota 3-2 and into next weekend’s Frozen Four also, conveniently, at Ridder Arena.

After four hours and 27 minutes of real time and 118 minutes and 51 seconds of game time, the Gophers, whose perfect season (39-0-0) and record winning streak (now at 47 games) remain intact), are headed to their ninth Frozen Four appearance in pursuit of their fifth NCAA title.

With former Gopher and current North Dakota senior Jocelyne Lamoureux serving a tripping penalty, Minnesota senior defenseman Mira Jalosuo’s shot from the blue line missed its mark but Rachel Bona corralled the puck at the right side of the UND net and shoved it toward the crease area. A scramble ensued and Terry got enough of the puck to poke it past Amsley-Benzi who finished the night with a remarkable 57 saves.

“It’s kind of my job to pick up any rebounds that we can find,” Terry said. “If I’m not open then Bona knows that she’s got to take [the shot] there. She made a really good play and I just saw it sitting between [Amsley-Benzi’s] legs and I took a swing.”

The goal mercifully, for the players, ended an outstanding but grueling game between two teams who know each other very well having met six times this season with Minnesota winning all six. None of the coaches and players made available to the media following the game could recall finding themselves in a similar situation.

“It’s a tough game, we knew it would come down to a bounce but our kids were so exhausted,” North Dakota coach Brian Idalski said. “You just look at them and you know the wheels are turning, they know what the right thing to do is, but there’s a disconnect between their hands skates and feet and trying to make plays at the end.

”When it gets to that point where you’re in six periods of hockey, it’s unfortunate anybody has to lose.”

“I thought we played a real good hockey game, as well as you could play under the circumstances,” Minnesota coach Brad Frost said.

North Dakota’s captain felt the likewise about her team’s effort.

“We gave them everything they could handle,” Lamoureux said. “I’ll be surprised if anyone gives them a game like that next weekend.”

Although it may seem odd to apply the word resilient to a team which hasn’t lost since Feb. 17, 2012 (when North Dakota beat them 2-1 in overtime), Minnesota not only persevered through extraordinary fatigue and the resistance an equally-exhausted, yet persistent, North Dakota team, the Gophers faced a 2-1 deficit with five minutes left in the second period and lost a key player shortly thereafter.

Minnesota was outshot 26 to 18 in the first two periods, including 18 to 8 in the opening 20 minutes, and was fortunate to only be down by one goal in the latter stages of the second.

“All the credit in the world to them, they hemmed us in,” Frost said. “They also took a lot of shots from the outside, which I know was their game plan—throw pucks to the net and hopefully bang home a rebound—so there weren’t a ton of quality chances but they certainly put a lot on net.”

“[North Dakota] came out flying and we were a little bit on our heels,” said Minnesota goaltender Noora Raty, who finished with 50 saves. “They didn’t put their heads down after the first goal, they just kept pressuring us and forechecking hard.

“We were kind of lucky that we got out of that first period just tied 1-1, then we got our legs moving.”

Raty’s fellow Patty Kazmaier Memorial Award finalists, Amanda Kessel and Megan Bozek, combined to tie the game at the 16 minute mark of the second with Bozek assisting on Kessel’s 44th goal of the season. But just 2:05 later, freshman Milica McMillen was called for a checking from behind penalty and ejected from the game leaving the Gophers shorthanded for the next five minutes and without one of their best defensemen for the remainder of the game.

Minnesota, however, killed off the major penalty which Bozek said was a huge boost for her and her teammates.

“That was unbelievable for our team to come together and not really give them that many opportunities,” Bozek said. “I think that was a momentum changer.”

But Minnesota couldn’t beat Amsley-Benzi and the Gophers found themselves in overtime, a mere random bounce of the puck away from its storybook season concluding in stunning and heartbreaking fashion.

“We haven’t had a ton of it, so we’ve had to create some of it this year,” Frost said. “Going to overtime with Bemidji and being down a few times this year—and we were both of those things tonight—losing one of our best defensemen for the rest of the game; all these things, when you come out a bit stronger, are huge benefits going into the biggest games of the year.

“I think there’s always some doubt that can creep in , but I think that’s where our kids are really mentally tough and just believed that they were going to get the job done tonight.”