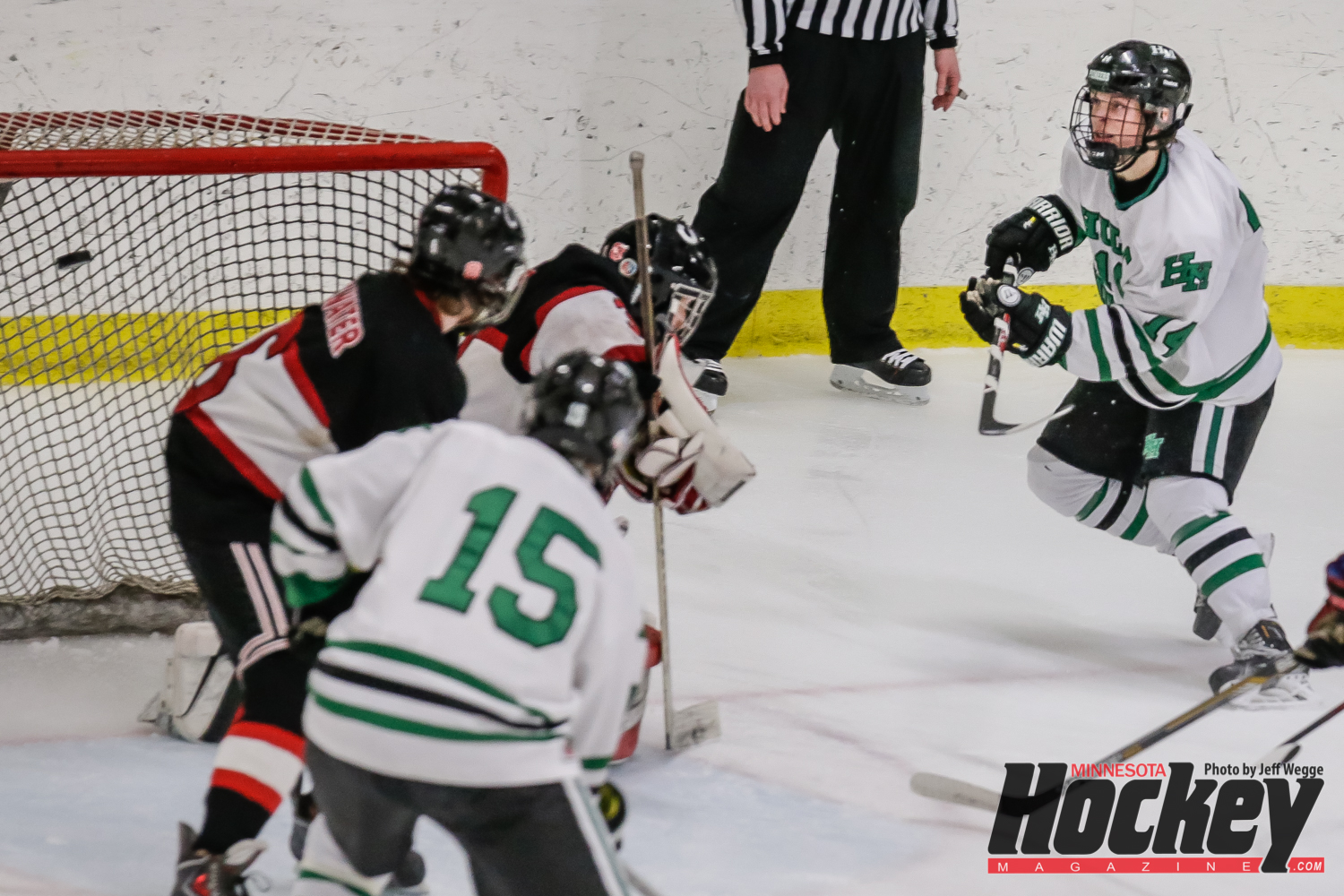 Hill-Murray’s Zach Mills gets a good look at his third period goal to give the Pioneers a 3-0 lead on their way to a 4-0 win over Stillwater in the Section 4AA final on Friday night at Aldrich Arena in Maplewood. (MHM Photo / Jeff Wegge)

MAPLEWOOD – The memory of the 2014 Section 4AA final had been burned into the mind of Hill-Murray coach Bill Lechner for 364 days.

“I know I’ve thought about it at least once every day for a year,” Lechner said of Hill-Murray’s stunning 2-1 loss to Stillwater which sent the Ponies to their first-ever state tournament.

A year later, Lechner’s team gave him a memory to cherish.

Hill-Murray (21-7-0) and Stillwater met for a second straight year to decide the Section 4AA championship and the time the Pioneers turned the tables on the Ponies (19-9-0), scoring early and pulling away for a 4-0 win in front of an Aldrich Arena record crowd of 3,273 on Friday night.

Senior Zach Mills scored twice and freshman Mikey Anderson scored a goal and added a pair of assists as the Pioneers earned their 27th state tournament berth. Lechner wasn’t exactly sure how he felt immediately after the game.

“I don’t know if it’s excitement for the win or relief because we didn’t play well last year, so it was a nice win tonight.”

Mills, on the other hand, found no difficulty expressing his thoughts on the win.

“Getting revenge on a [rival] is always great,” Mills said. “The boys came out ready to play and we had fun and we got the result that we wanted.”

The Pioneers drew first blood less than two minutes after the opening faceoff on Anderson’s ninth goal of the season.  The freshman pounced on a loose puck in the crease after a Jake Wittle shot and tucked it inside the left post at 1:57 for a 1-0 Hill-Murray lead. 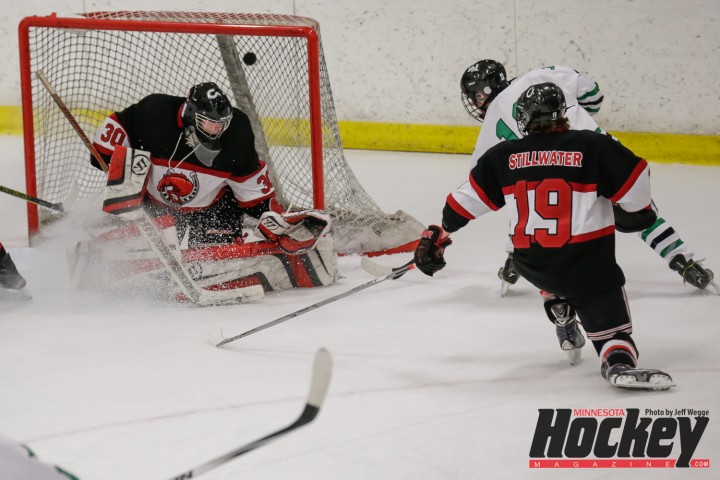 Hill-Murray’s Tyler Nowak puts the Pioneers up 2-0 in the second period of their 4-0 Section 4AA final win over Stillwater at Aldrich Arena. (MHM Photo / Jeff Wegge) (Click on the image to view full size)

Tyler Nowak’s goal at 14:37 of the second period gave the Pioneers a 2-0 lead and some much-needed breathing room at the time. As Nowak carried the puck through the right circle his initial shot was stopped by Stillwater goaltender Josh Benson but the rebound landed on his tape and the senior roofed it for his ninth of the year.

“That was a huge momentum changer,” Mills said. “A one-goal lead is always dangerous so getting that goal was huge.”

The goal was significant in that the Ponies made a strong push in the second and nearly tied the game more than once as the Pioneers clung to a one-goal lead after one period. Had Stillwater converted it would have provided a similar to their last meeting a year ago when the Ponies tied it in the second and won it in the third.

“It was definitely in the back of the head but we kept pushing to do the right things,” Mills said. “We kept it simple and we remembered not to fall apart like last year, so that was key.”

The Pioneers put the game away near the midway point of the third on a pretty goal by Zach Mills. Carrying the puck out of the right corner, Mills tip-toed around a defender and fired a short-side shot over Benson’s left shoulder at 9:06 for the senior’s 23rd of the season.

Lechner said the key for the Pioneers was keeping the pressure on and avoiding the tendency to relax after Nowak’s goal and credited his players for doing just that.

“We always talk about by the end of the year you just open up the gate,” Lechner said. “Tonight, for the most part, we just opened the gate and we didn’t have to coach much, just support them.”

The Ponies pulled Benson with 3:25 to play but Mills scored his second goal 30 seconds later into an empty net putting an exclamation point on the victory, but not the season according to Mills.

“We made up for last year and we’ve got some unfinished business to take care of.”