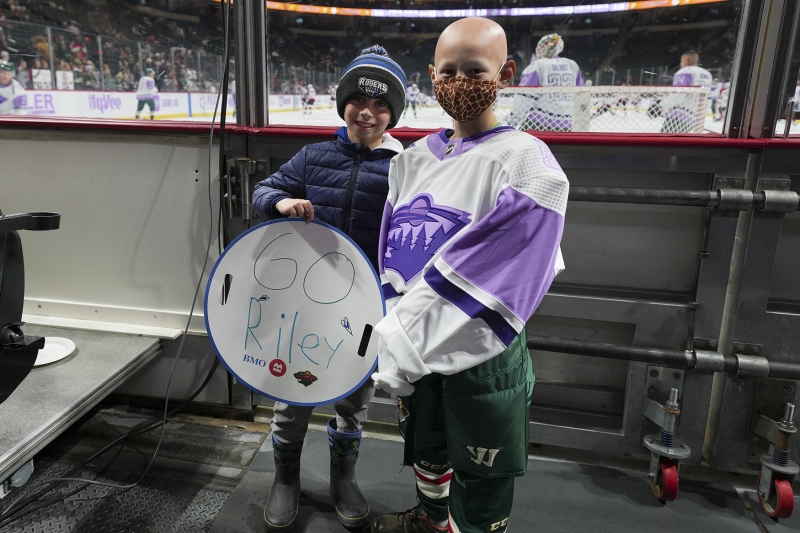 Riley Kane poses with his good friend, Caleb Schroeder, who is holding the sign he created to show support for his buddy. (MHM Photo / Rick Olson)
Prev2 of 4Next
Use your ← → (arrow) keys to browse 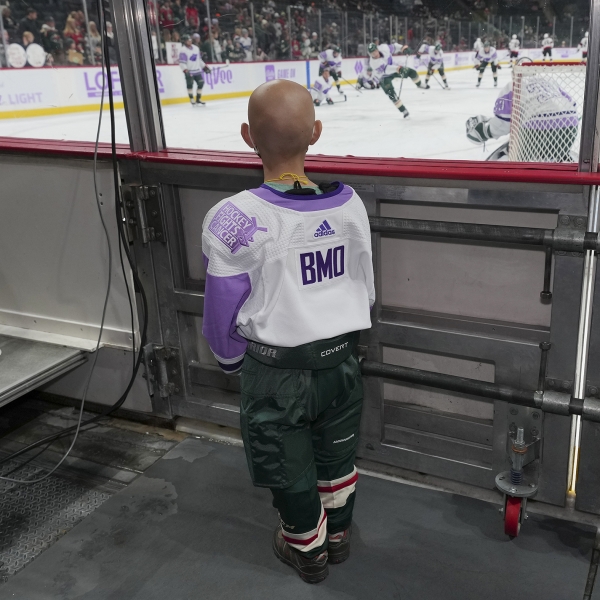 Riley watches the Wild warm up in their lavender Hockey Fights Cancer jerseys, matching his own. (MHM Photo / Rick Olson)

Riley was diagnosed with rhabdomyosarcoma, a rare form of cancer in that only 300 children are diagnosed with it annually in the United States, but it is said to be the most common soft-tissue cancer found in children. Originally categorized as between Stage 1 and Stage 2, the needle moved to Stage 4 on March 12 following a retroperitoneal lymph node dissection (RPLND), an eight-hour procedure in which nearly 150 of Riley’s abdominal lymph nodes were surgically removed, 141 of which were found to be cancerous.

While the cause of rhabdomyosarcoma is unclear, according to the Mayo Clinic, doctors do know it, “begins when a cell develops changes in its DNA. A cell’s DNA contains the instructions that tell a cell what to do. The changes tell the cell to multiply quickly and to go on living when healthy cells would normally die. The result is a mass (tumor) of abnormal cells that can invade and destroy healthy body tissue. The abnormal cells can break away and spread (metastasize) throughout the body.”

As of Nov. 2, Riley had undergone 31 weeks of chemotherapy, six weeks of radiation treatments and endured three surgeries in the eight and a half months since his diagnosis. Thankfully, Tera says the treatments have proven to be effective as Riley’s most recent scan showed no signs of cancer.

“But because it’s a soft tissue cancer, they keep treating for a number of weeks afterwards, just to make sure that any of the cells that are too small are gone before they finish treatment,” Tera said. “So, if all goes according to plan, his last treatment will be Christmas Eve.

“Hopefully, at the end of this year, they’ll tell us he’s cancer free.”

For now, thanks to his treatments, the one thing Riley is most assuredly free of is hair. He struggled with his hair loss at first, but Jeff says he eventually came around.

“When it started happening, we were like, ‘Buddy, you know, there’s going to be a pile of hair laying in your bed every night,’” Jeff said. “And he was like, ‘Alright, let’s get rid of it then.’ And he just took it with grace.”

Hi mom added that Riley has since embraced his baldness to the point where he rarely even wears a hat.

“The only reason he wears a hat is because he gets cold,” Tera said. “He goes, ‘It’s actually really nice. I don’t think I’m going to let my hair grow back.’”