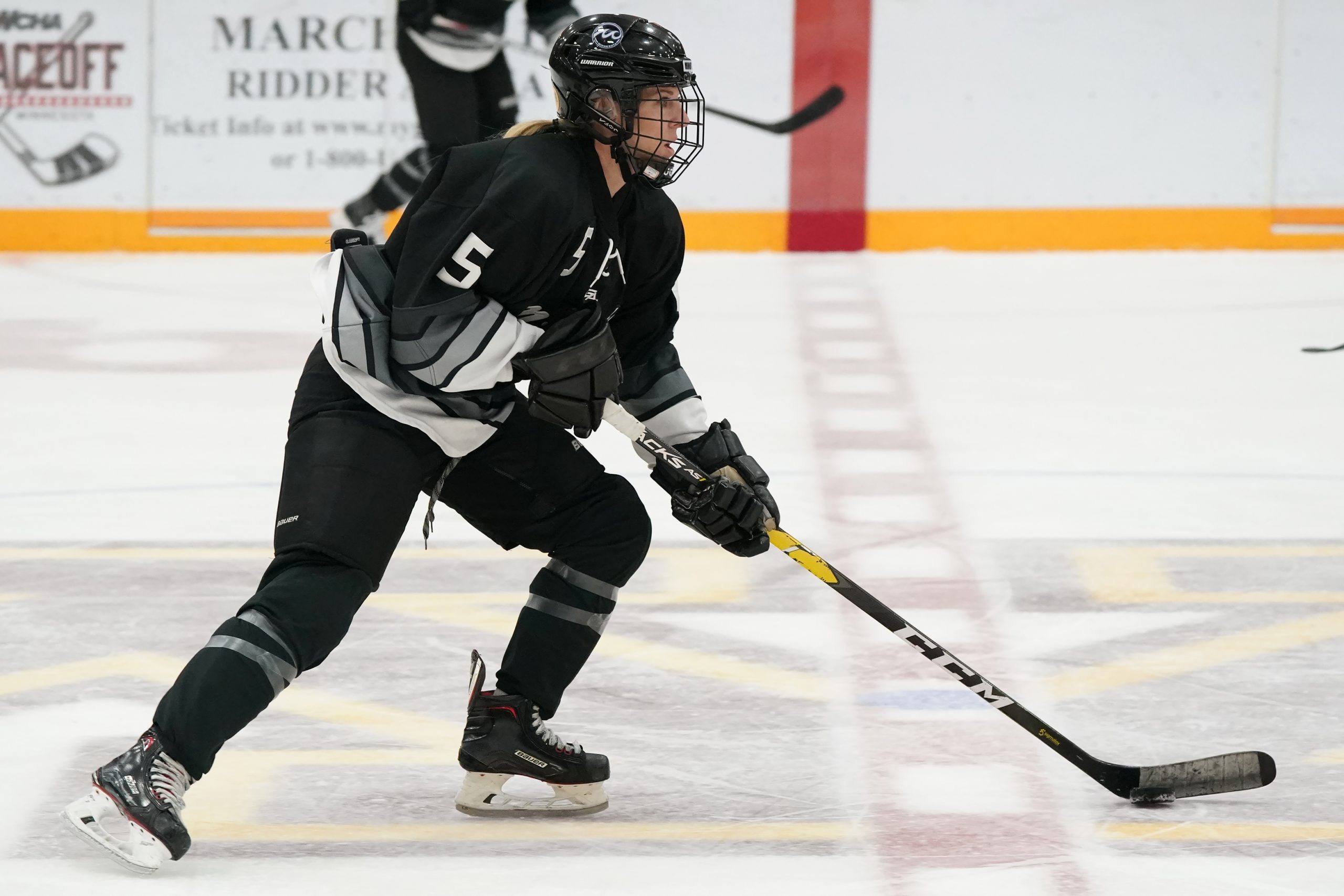 Minnesota Whitecaps D Winny Brodt Brown skates the puck up ice during a Sept. 22, 2019 exhibition game against the University of Minnesota at Ridder Arena in Minneapolis. (MHM Photo / Rick Olson)
Prev2 of 8Next
Use your ← → (arrow) keys to browse

Creating a place to play after college 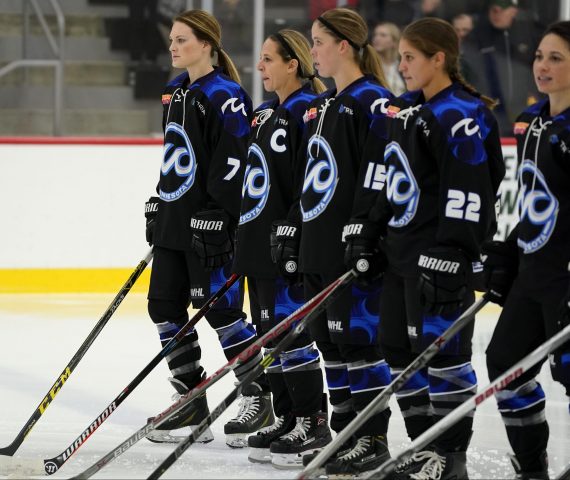 Winny Brodt Brown (second from left) stands with her teammates during the National Anthem prior to the Whitecaps’ inaugural NWHL home game on Oct. 6, 2018 at TRIA Rink in St. Paul. (MHM Photo / Rick Olson)

Having won national championships at the University of New Hampshire and then the University of Minnesota, Winny fielded a lot of questions after she graduated from the U of M about where she was going to play next, “because they know I’m a rink rat.” For sure, she had her sights on WHAM, the Women’s Hockey Association of Minnesota, with players ranging in age from 18 through 70+, and organization Winny’s mom, Marlene, still plays with today.

That’s when Jack Brodt and Dwayne Schmidgall decided there needed to be something a little bit more high-level for women wanting to play hockey after college. Thus, the Minnesota Whitecaps were born in 2004.

Jack Brodt is one of those people that just gets things done, no matter if it’s tough or easy, according to Winny. Because things like starting a high school program at Roseville and then the Whitecaps have to start somewhere.

“It just doesn’t appear and happen and be just awesome at the beginning,” Winny said. “Like every program. Like the NHL probably had lumps and bumps.”

The Whitecaps played in the Western Women’s Hockey League and then as an independent team after that league dissolved after the 2010-11 season. The Whitecaps’ competition were usually college teams, including the Gophers.

When the Whitecaps were the fifth team to join the then-National Women’s Hockey League in 2018-19, Jack Brodt and Ronda Curtin Engelhardt joined forces as co-head coaches.

Engelhardt, 41, is now behind the bench in which two of her childhood friends, Winny and her younger sister Chelsey Brodt Rosenthal, are two of her defensemen on the ice. Engelhardt helped lead the Whitecaps to a championship in the 2018-19 season.

Both Engelhardt and Slominski could still be skating, Winny said during the 2019-20 season, as could Wendell and Olympian Natalie Darwitz.

“There’s some times where I want to be like, ‘Ronda, come on put your skates on and get out here,’” 38-year-old Chelsey said, with a laugh.

But there are still benefits to the player-coach relationship with Engelhardt, and Slominski when she was on the bench. There’s a bit of ESP going on between all of them, Winny said.

“We know exactly what we’re thinking. We’ll look and we don’t have to talk,” Winny said.

“It’s always fun to yell at Winny and tell her to get moving, you know?” Engelhardt quipped. “It’s cool just to watch the growth and how it’s still going. … Hats off to the Brodt family for keeping it going.”