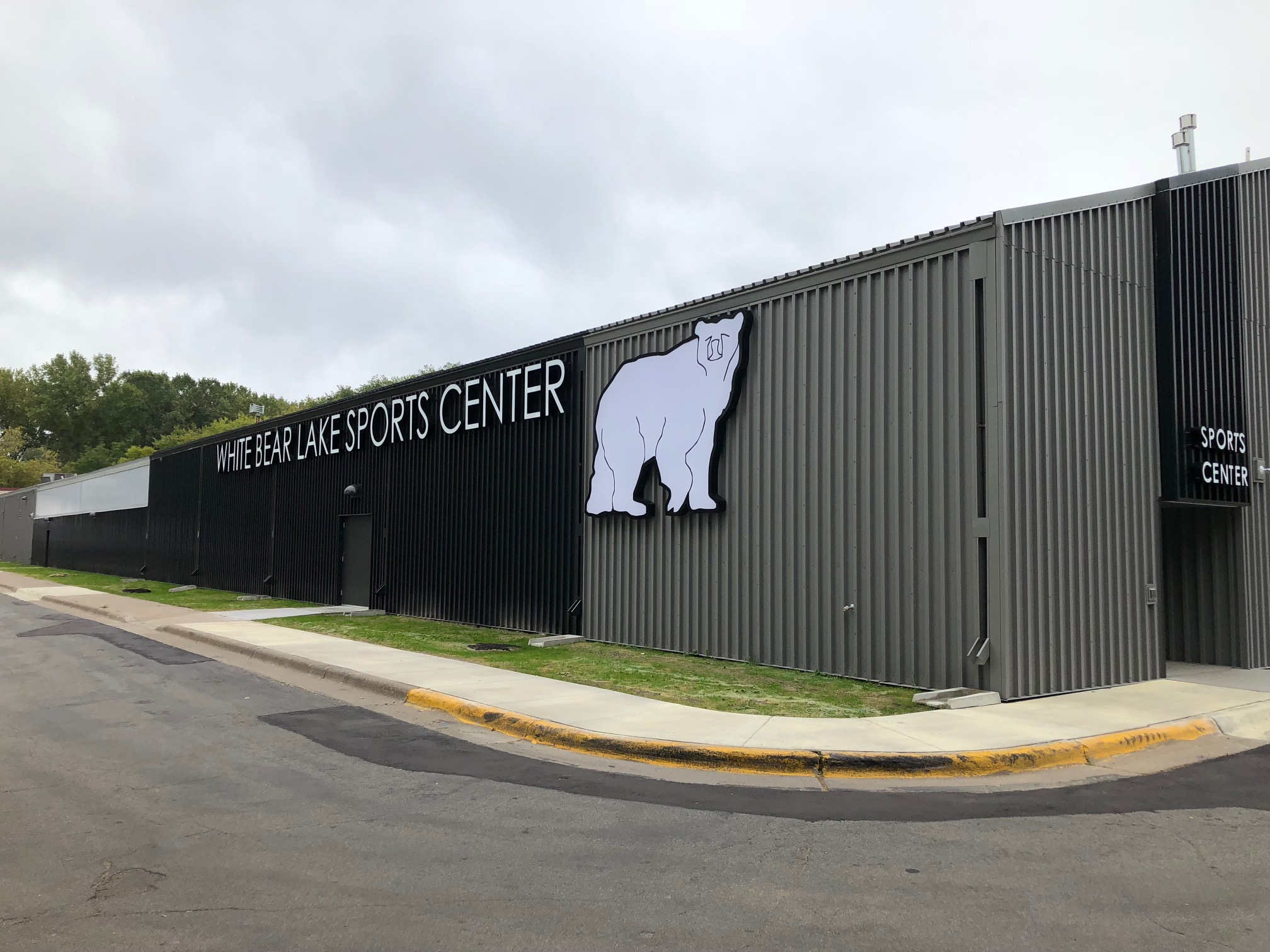 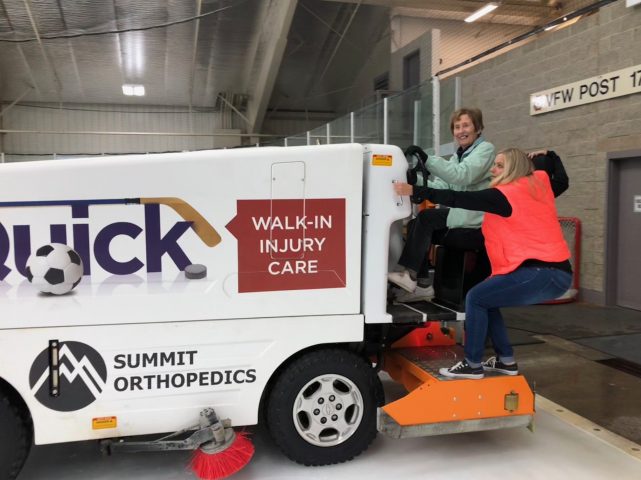 On a chilly, late-September day, hockey was in the air as a community gathered to celebrate the preservation and restoration of its city rink. The City of White Bear Lake held a ribbon-cutting ceremony on Saturday, Sept. 29 to officially re-open the White Bear Lake Sports Center (WBLSC) after a skateless summer.

Members of the White Bear Lake Area Hockey Association (WBLAHA), the White Bear Lake Skate School, and the general public looked on as Mayor Jo Emerson ceremonially drove the building’s Olympia ice resurfacer through a red ribbon and onto the ice generated by the facility’s new refrigeration system.

“We are very proud of this,” Emerson told the black and orange-clad crowd. “We want our hockey players and our figure skaters to have this home and I think it’s a great home and it will serve us well for years to come.”

The festivities included performances by skate school alumni Sydney Berrier and Maria Starr, who have moved on to professional careers with Disney on Ice.

In addition to the new refrigeration system, the $5.5 million project includes a new air exchange and monitoring system, all new LED lighting both inside and out, new ceiling tiles, roof and siding. Translucent panels have been added above a portion of the brand new bleachers to supplement the new lighting with an influx of natural light.

The project is the result of a partnership between the city and the WBLAHA in which the association is contributing $2.5 million. WBLAHA President Kevin McFarlane delivered a $500,000 down-payment check to the city council at its Sept. 25 meeting with the remaining $2 million to be paid back over the next 20 years.

It is a partnership that nearly didn’t happen, though, which would have dealt a devastating blow to the hundreds of youngfigure skaters and hockey players who depend on their hometown arena. 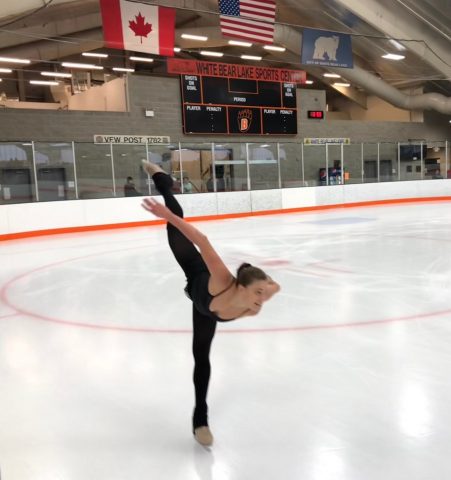 As it approaches its 30th season of operation, the WBLSC has long been showing signs of aging. Outside of general disrepair, cracks in the rink floor had developed and the refrigeration system was starting to leak but WBLSC Supervisor Bruce Bates’ hands were tied by budget restraints.

“We knew that the system was going to be breaking down and, on top of that, they were no longer making parts for our particular rink refrigeration system,” Bates said. “So we literally were going to rinks as they closed and remodeled like we just did. We were going to their site and stealing parts. They literally said come, bring a Sawzall, cut off a valve, a vent, that weren’t being made anymore. So we had quite the inventory here, for a number of years, of stuff on the shelf and it really saved us.”

The system experienced some breakdowns over the last year which completely depleted the used spare part inventory and from there Bates said they just kept their fingers crossed.

“It was scary because you make commitments to people and you don’t want to call them and tell them, ‘Hey, we have a problem, we had a breakdown, we can’t have ice anymore,’” Bates said.

The arena typically shuts down and removes the ice for a month in the offseason for maintenance purposes before hosting summer hockey training and skating. That idea was scrapped for the summer of 2017.

“They didn’t take it out because they were nervous that if they took it out, thawed everything and re-froze it later they would have more issues,” McFarlane said.

According to Bates, the city, at that point, was considering pulling the plug and selling the property if and when that next breakdown occurred.

“That wasn’t going to sit with a lot of people,” Bates said. “This is a huge value to the community, even if you’re not a hockey player.”

So McFarlane and Bates, among others, joined forces in a campaign to save the arena, not only for the short term, but for future generations. McFarlane brought his concerns to WBLAHA board members and got the green light to proceed.

“Everybody jumped on board with what we wanted to do and the fact that we needed to save the rink,” McFarlane said. “Then it was a push to make sure the city would go along with it and that wasn’t easy.”

With the WBLAHA’s boundaries consistent with the White Bear Lake Area School District 624 which serves all or parts of nine surrounding cities, White Bear Lake’s concern was why should the city bear the burden for renovating a facility used by so many who don’t generate property tax revenue for the city?

“We looked at that in three ways,” Bates said. “One, if you live in [White Bear] Township or Vadnais Heights or Hugo and you ask them, ‘Where are you from?’ they say, ‘I’m from White Bear.’ It’s more of a White Bear proper, White Bear school district boundary feeling, if you will, I think a lot of people feel that way in this part of the town. Secondly, I think they looked at the economic impact. The third thing, I think, would be the city is turning over. A lot of the seniors in town are selling their homes and there’s a lot of young families moving in. I think some council members looked at that, as we tried to argue, what’s the draw to this town?

“They looked at all those things and said, ‘You know what? That is an asset that does help draw people.’”

McFarlane and Bates both credit White Bear Lake City Manager Ellen Hiniker with being instrumental in securing the city’s investment in the project.

“She saw the rink as an asset, didn’t see it as a burden,” Bates said. “Another way that she’s looking at it is from a re-development perspective. We’re hoping that this is the start of a re-development of this area as kind of a gateway into town right here on Highway 96 where thousands of cars go by every day.” 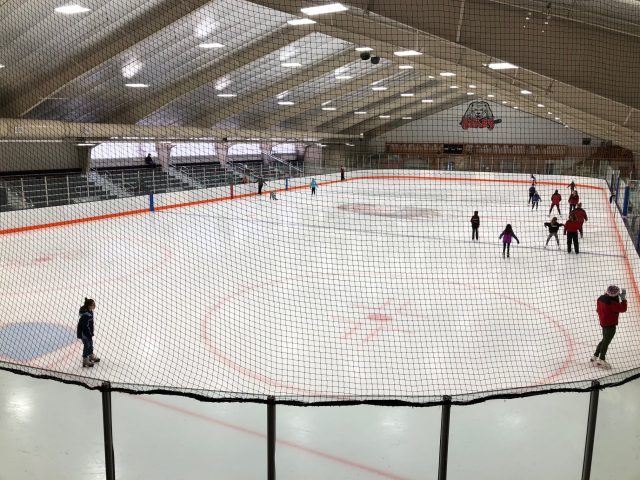 McFarlane says 90 percent of the WBLAHA’s contribution was raised via charitable gambling with rest coming from direct donations from families and area businesses. One such donor is Carlson Chiropractic owner Dustin Carlson, who grew up playing hockey with McFarlane and skated in the White Bear Lake Sports Center when it first opened. Carlson has pledged $25,000 per year for the next five years.

Retired NHL and Minnesota Wild player Ryan Carter, who starred as a youth and high school player in White Bear Lake is happy to see what he calls the focal point of his youth hockey career saved from extinction.

“It’s neat the city and community re-invested in it,” said Carter who delivered the Stanley Cup to the WBLSC in 2007 as a member of the Anaheim Ducks. “I understand the economics behind it and a lot of people other than the city are getting use out of it but I think it’s valuable to the community and I’m happy to hear that there’s been a commitment to it and people recognize the fact that White Bear’s a hockey town and they deserve a rink or maybe two.”

Two Rinks, you say? Almost nothing makes McFarlane’s eyes light up more than the thought of what he call Phase II.

“My big picture idea is another rink, one where the high school team can play, to actually play within the city of White Bear which they haven’t done since God knows when,” McFarlane said. “To have two sheets of ice here, potentially have a curling rink and more of a centerpiece for this side of town.

“Right now, I think we’ve got Phase I. The main portion was making sure this rink was still here to use, which it wasn’t going to be.”

McFarlane says he envisions an arena with three-sided seating which emulates history and sense of community found in Duluth’s Heritage Sports Center and the IRA Civic Center in Grand Rapids. It is an ambitious vision which McFarlane and Bates both agree will require the participation of a school district whose varsity boys teams have not played within the city limits in decades. The White Bear Lake girls’ varsity team, on the other hand, will return to the WBLSC after several years of calling the Vadnais Sports Center home.

“I believe they desperately need a facility for that high school and I would love to see it back in White Bear,” McFarlane said. “So if we can get the community and the school board involved in it, we shouldn’t have to fundraise the entire sum, but we do want to get involved and helped them out to get that built too.”

With that in mind, Bates said extra money was built into the budget to prepare for the potential addition, including installing a refrigeration system capable of handling two rinks, setting it at the proper angle and doing the preliminary piping work required in order to connect to the new arena when the time comes.

White Bear Lake City Engineer Mark Burch, a life-long player and current referee, managed the the renovation of the one-time tennis and racquetball club just as he did in back 1989 after its property owners were convinced to sell it to the city at a reduced price for the purpose of converting it to a rink.

“One of his first jobs when he started here, the City Manager said, ‘Hey, you’re a hockey guy, we’re contemplating buying a building and turning it into an ice rink,’ and, of course he jumped on board with that, he just loved the project.” Bates said. “He was going to retire and the city was in at that point and they said, ‘Mark will you stick around and manage this project and put off your retirement?’ and he did.”