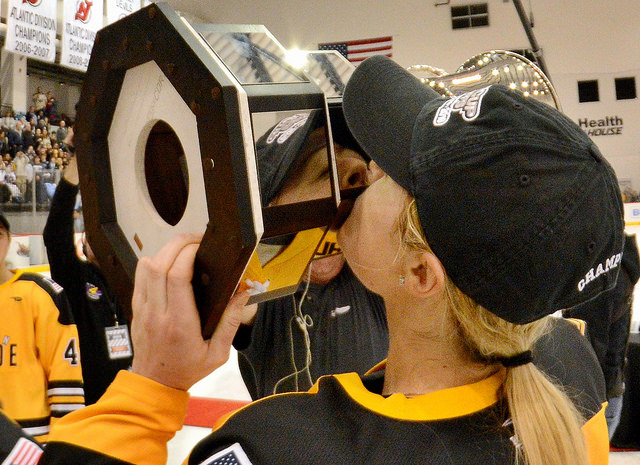 By Dustin Nelson – Special to MHM

“I’m just blessed,” said the former University of Minnesota star on March 13, while still standing on the ice at the New Jersey Devils Hockey House in Newark, New Jersey. 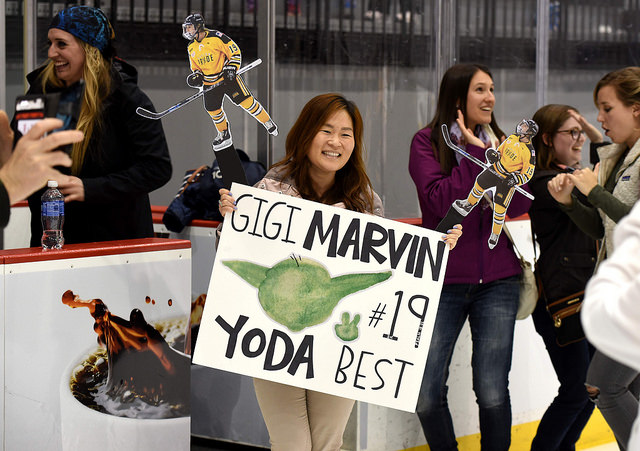 She deflects credit to her teammates and talks about the successes of the league, while 50 feet away fans stand with signs cheering on the Pride, like one sporting a drawing of Star Wars’ Yoda saying “Gigi Marvin – Yoda Best!”

“They’re my friends from Boston. We go to the same church,” she says. “They came down for the weekend to cheer me on. They don’t know much about hockey, but they sure have fun.”

It was a year of successes for the Warroad, Minn. native. She had previously played for the Boston Blades in the longer-running rival to the NWHL, the Canadian Women’s Hockey League (CWHL). But in the spring of 2015, Marvin and her U.S. National Team teammates were faced with an opportunity.

A new league was forming and it was going to pay players. 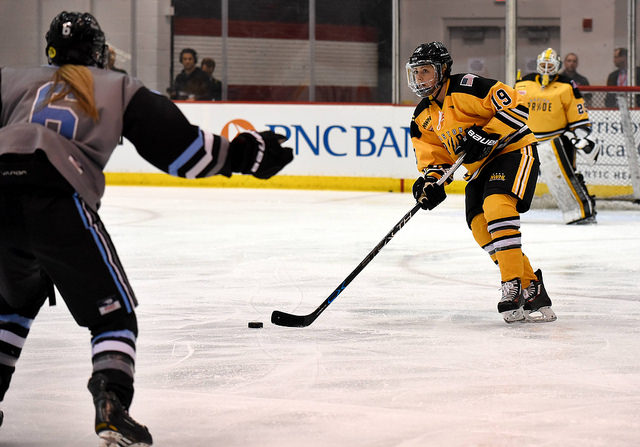 “There were potential risks involved,” Marvin said, reflecting on the season in late April. “Will the season continue? Will it stop halfway through? Will X, Y, and Z happen? Those are the kind of questions anyone has at the start of a league

“After determining the pros and cons and debating it, we chose to move forward.”

It wasn’t just the National Team moving to the NWHL, but a very large percentage of her teammates from the Boston Blades in the CWHL.

It was a team loaded with talent, including star forwards Hilary Knight and Brianna Decker, NWHL Goaltender of the Year Brittany Ott and Marvin’s defensive partner and National Team teammate Kacey Bellamy.

“It was a just a great opportunity to be a forerunner (in professional women’s hockey), if you will,” she said. “It was special. It was an amazing year where we were able to get paid for our job of playing hockey, a game that we love.”

It also presented the opportunity to play under Head Coach Bobby Jay, who coached the 2014 Olympic Team. “I was really excited to be able to play for him again,” she said.

Marvin was more than another player taking a chance with a burgeoning league that had a big idea. She was thriving on the league’s best team. 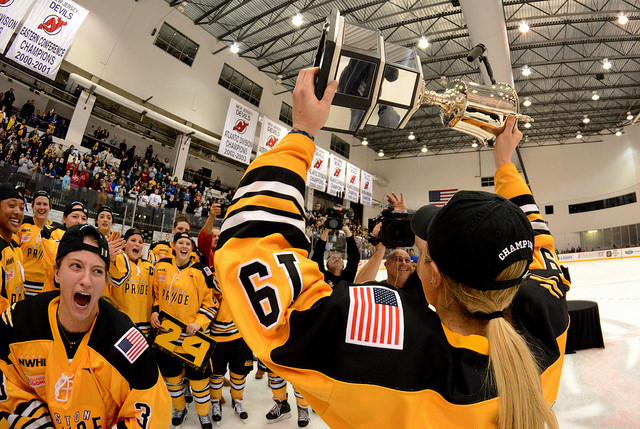 The Pride not only won the Isobel Cup, but dominated the regular season. They lost just three games on their way to being the number one seed in the postseason and sweeping through the playoffs without dropping a contest.

Marvin had a solid regular season, contributing five goals and 14 points in 16 games, enough to get her into the NWHL All-Star Game, but she really turned it on in the postseason. She played key minutes for the Pride, including being a part of a first unit penalty kill that could go even up on shots with opponents.

When the Cup was hoisted, she had posted two goals and seven points in four games.

That strong playoff performance was certainly a part of her being named the NWHL’s first Defenseman of the Year. 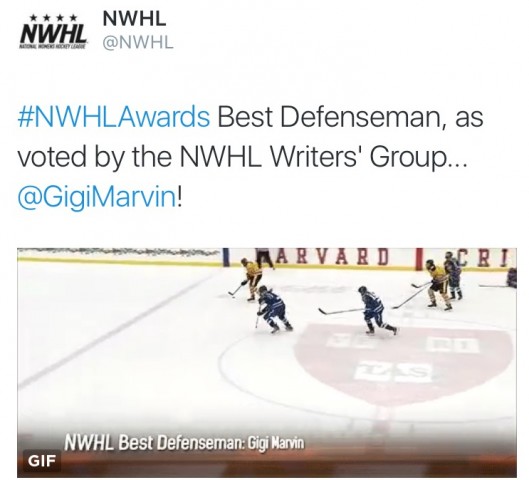 Yet, in the face of it all, she seems forever calm and collected.

“There’s no pressure because it’s a game and we made it here and we’re just going to play it out,” she said in March, talking about the pressure of a championship game.

“As with anything on the first go around, there’s always a lot to improve,” she said. “Overall though, [the NWHL] didn’t exist last year and here we are today. That’s amazing. It says a lot about what’s going on (in women’s hockey). I’m excited for the future, because there’s a lot to build on.”