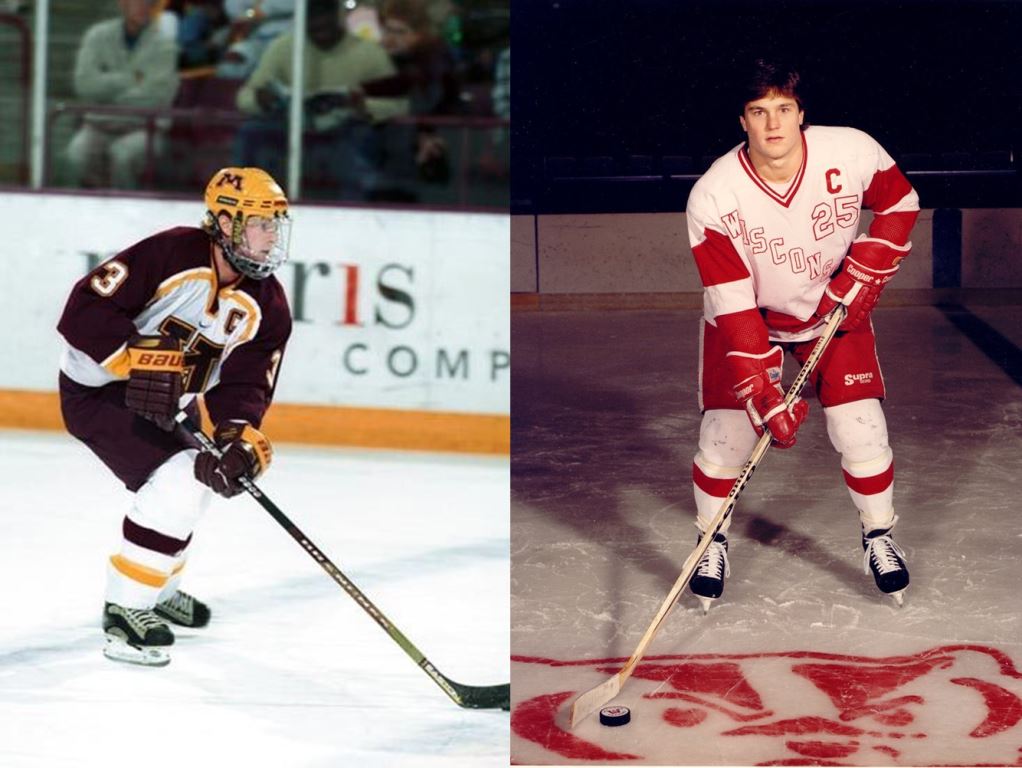 Jordan Leopold (L) and Paul Ranheim never played against each other in college but get that chance in Friday’s Minnesota vs. Wisconsin Alumni Game in Stillwater.

It’s not unusual for teams from neighboring states and communities at any level of sport to square off in what has been commonly dubbed a “Border Battle.” What is rare, however, is for these battles to literally be contested on the border.

Such is the case on Friday, Jan. 20 when a who’s who of University of Minnesota alumni hosts a star-studded collection of former Wisconsin Badgers on the banks of the St. Croix River. The outdoor contest in Stillwater’s Lowell Park is one of the warm-up acts for Saturday’s Hockey Day Minnesota festivities.

Friday’s events begin with a team of firefighters taking on the police at 4:00 p.m. followed by a 6:00 p.m. meeting between the Minnesota Whitecaps women’s pro team and the Korean National Team. The puck drops on the Gopher/Badger reunion party at 7:30 p.m. on Friday and will be played concurrently with Minnesota’s game at Wisconsin that night.

The players are looking forward to getting back to their outdoor roots and sharing the experience with old friends and former foes. 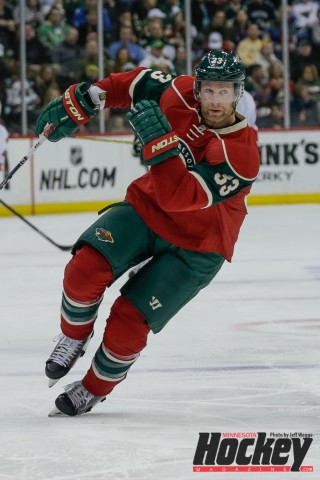 “Outdoor hockey is in our blood,” former Gopher All-American and Hobey Baker Award winner Jordan Leopold said. “All of us guys grew up on the outdoor rinks, or the ponds or whatever it may be. So to get an opportunity to go out and go into a man-made ice arena right next to the bridge, right next to the river, is pretty cool.”

Leopold’s “pond” was Golden Valley’s Wesley Park, roughly a mile from his childhood home. It’s where he honed the skills which propelled him to a 12-season, eight-team NHL career after winning a national championship with the Gophers in 2002.

“I’d get off the school bus and go walk down there, go skate, come back home and go to practice. That was kind of my routine every day. Then also I went up to my grandparents’ lake place, shoveled off a rink and was up there all weekend skating, snowmobiling or whatever it may be.”

Former Wisconsin star, Paul Ranheim’s “pond” was at Edina’s Creek Valley Elementary School where his dream of leading the Hornets to a state championship was born.

“That’s where I went every chance I got,” said Ranheim whose dream was realized as a senior in 1984. “We spent every weekend there. We’d get dropped off with a bag lunch and a, ‘See you later.’”

One of the alumni game’s elder statesmen, the 50-year-old Ranheim was lured into participating by a fellow former Badger. “I got a call or a text from my old teammate, Tom Sagissor, and he says, ‘You’re playing in the alumni game and you’re on my line,’” Ranheim said. “I said, ‘Alright, but you better pass the puck to me.’”

Less than 24 hours after skating side-by-side, however, the pair will have opposing interests on that very rink. Ranheim, an Eden Prairie high school assistant coach, and his Eagles play Sagissor’s son, T.J., and the rest of the Stillwater Ponies at 1:00 p.m. on Saturday.

Will Eden Prairie players be there on Friday night watching Ranheim with interest, much like Minnesota Wild players did nearly a year ago when Wild assistant coach Darby Hendrickson and former assistant Andrew Brunette skated in the Stadium Series alumni game?

The 1988 First-Team All-American and Hobey Baker Award finalist laughed at the notion.

“I hope they’re home resting for the game the next day so they don’t get to actually see what the old coach looks like,” Ranheim said. “He’s a shadow of his former self.” 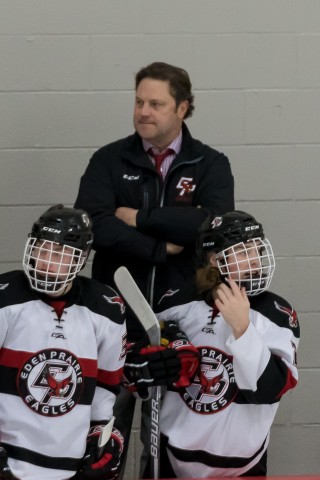 Eden Prairie assistant and former Badger Paul Ranheim looks on as his Eagles host Prior Lake on Jan. 7, 2016. (MHM Photo by Jonny Watkins)

A veteran of 15 NHL seasons with five teams, including the Calgary Flames who drafted him in the second round (No. 38 overall) of the 1984 NHL Draft, Ranheim said he’s not doing anything special to prepare for the reunion.

“I’m not doing sprints and Herbies,” Ranheim said. “I’m on the ice every day so it’s not like I haven’t been on skates for a while. I just hope it isn’t too fast paced. I hope it’s more of a casual, gentleman’s game.”

The 36-year-old Leopold, meanwhile, has taken some time off, but the 1999 second-round pick (No. 44 overall) by the Anaheim Mighty Ducks says he’s not worried.

“I’ve kind of taken a good eight months off of hockey just coaching my kid,” Leopold said. “I haven’t really worked out a bunch but, you know, when you go out there it’s like riding a bike.

“The muscles may be a little bit sore but more than anything it’s the laughs, it’s seeing the guys, having a couple adult beverages, it’s all about good fun.”

While Ranheim says he’s really looking forward to meeting some of the younger former Badgers he never played with, Leopold is most eager to reunite with the guys from the 2002 Frozen Four title team.

“We don’t get to see each other that much anymore. we all have kids, lives jobs,” Leopold said. “Then you’ve got guys on the other side who I grew up either watching or playing against too.”

Although Leopold and Ranheim played in vastly different eras and never faced one another in college, the two met twice on NHL ice on Feb. 23 and March 24 of 2003, Ranheim’s final season and Leopold’s rookie campaign.

Both players, though, are simply excited about the opportunity to enjoy night playing the game they love outdoors with their friends and share a few laughs along the way, all the  while adding a unique layer to an old, bitter rivalry.

“Playing old Bucky Badger right on the border is,” Leopold paused. “I guess you can’t say you do that every day.” 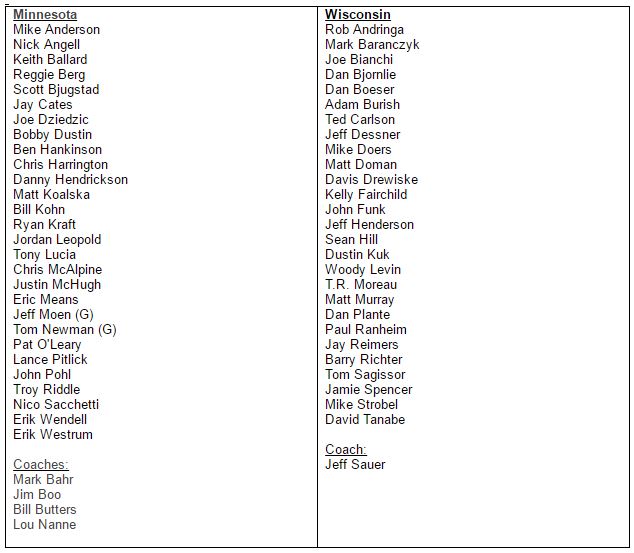