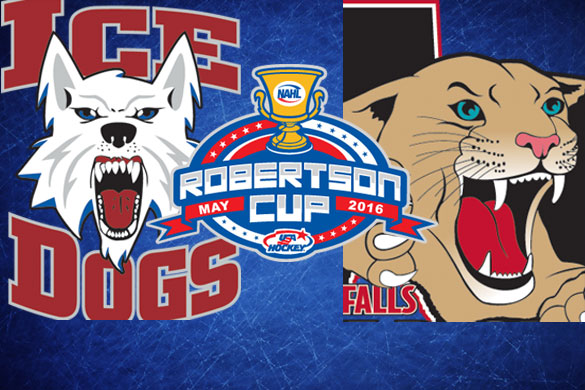 EDINA, MINNESOTA – The 2016 NAHL Robertson Cup National Championship Game is set and the top two seeds in the event, the #1 Fairbanks Ice Dogs and #2 Wichita Falls Wildcats, both won their Semi-Final Series on Friday night to set up the one game title match-up on Sunday, May 15th at 1:00pm at the Braemar Ice Arena in Edina, Minnesota. The Robertson Cup crowns the NAHL’s National Champion.

Tickets for the final game are available at the door and are $15 for adults. Children ages 8-18 and Groups of 10 or more are $10 and kids 8 and under are free. All seating is general admission. 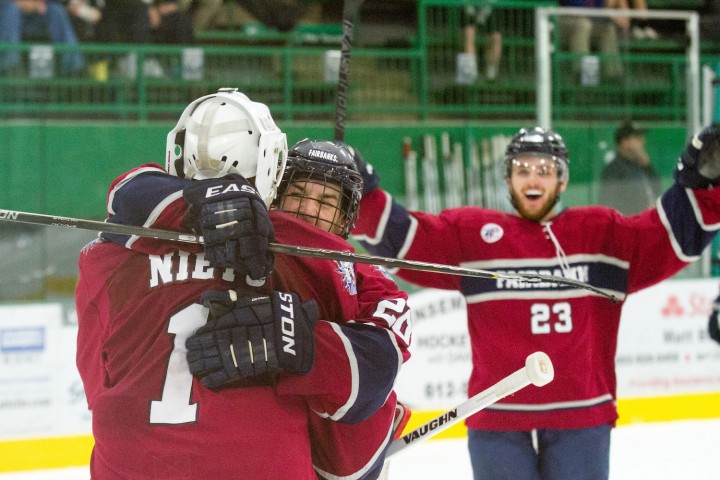 The Fairbanks Ice Dogs swept the Aston Rebels, 2-0 in their Semi-Finals Series on Thursday and Friday.  Fairbanks forward Reggie Lutz (Elk River, Minnesota) leads the 2016 NAHL Playoffs with eight goals, including four in the first two Semi-Final games. Forward Todd Burgess (Phoenix, Arizona/RPI), who is on the final NHL Central Scouting list for the NHL Draft, is tied for 2nd in playoff scoring with 13 points. Ice Dogs goalie Gavin Nieto (Yorba Linda, California/Brown University) has a 1.49 goals against average and a 93.9% save percentage in 11 playoff games. The Ice Dogs, who are coached by Trevor Stewart (Elk River, Minnesota), are in their fourth Robertson Cup Championship Game in the last seven years.  They won the Championship in 2011 and 2014. They have seven players from the state if Minnesota. 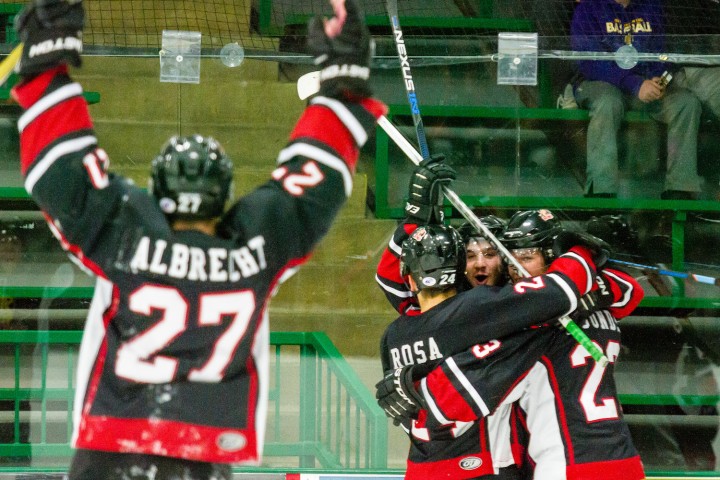 The Wichita Falls Wildcats swept the Bismarck Bobcats, 2-0 in their Semi-Finals Series on Thursday and Friday. Wichita Falls has a perfect 8-0 record in the 2016 NAHL Playoffs. Wildcats forward Austin Albrecht (Flemington, New Jersey) is 2nd in the 2016 NAHL Playoffs with six goals and forward Austin Beaulieu (Coral Springs, Florida/Alabama-Huntsville) is 4th in NAHL playoff scoring wit 12 points. Goaltender Justin Kapelmaster (Coral Springs, Florida/Ferris State) is a perfect 8-0 in the playoffs so far this season with a 1.87 goals against average and a 94.0% save percentage. The Wildcats are coached by the NAHL Coach of the Year, John LaFontaine (Pontiac, Michigan).

Scouts: Scout admission for the National Championship Game will be complimentary for all NHL and NCAA scouts. Scout passes include entrance to the scout room, where food and beverages will be provided, along with line charts, statistics and event programs. 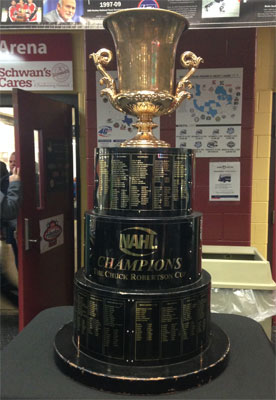 The oldest junior hockey trophy in the United States, the Robertson Cup is named in honor of Chuck Robertson, a pioneer of junior hockey in the NAHL and youth hockey in the state of Michigan. Robertson was the owner of the Paddock Pools team when it won a record seven straight NAHL championships from 1976-83.

The NAHL, the only USA Hockey-sanctioned Tier II Junior league boasting 24 teams from across North America, prides itself on the social maturity and skill development of student-athletes ages 16-20 with aspirations of advancing to collegiate and/or professional hockey. So far during the 2015-16 season, more than 190 NAHL players have committed to NCAA schools and in the past two seasons over 450 players have made NCAA commitments. In addition, 11 NAHL players were listed on the 2016 NHL Central Scouting final list and seven players with NAHL ties were selected in the 2015 NHL Entry Draft.

Celebrating its 40th anniversary season in 2015-16, the NAHL, the only USA Hockey-sanctioned Tier II Junior league boasting 22 teams in 10 states from across North America, prides itself on the social maturity and skill development of student-athletes ages 16-20 with aspirations of advancing to collegiate and/or professional hockey.