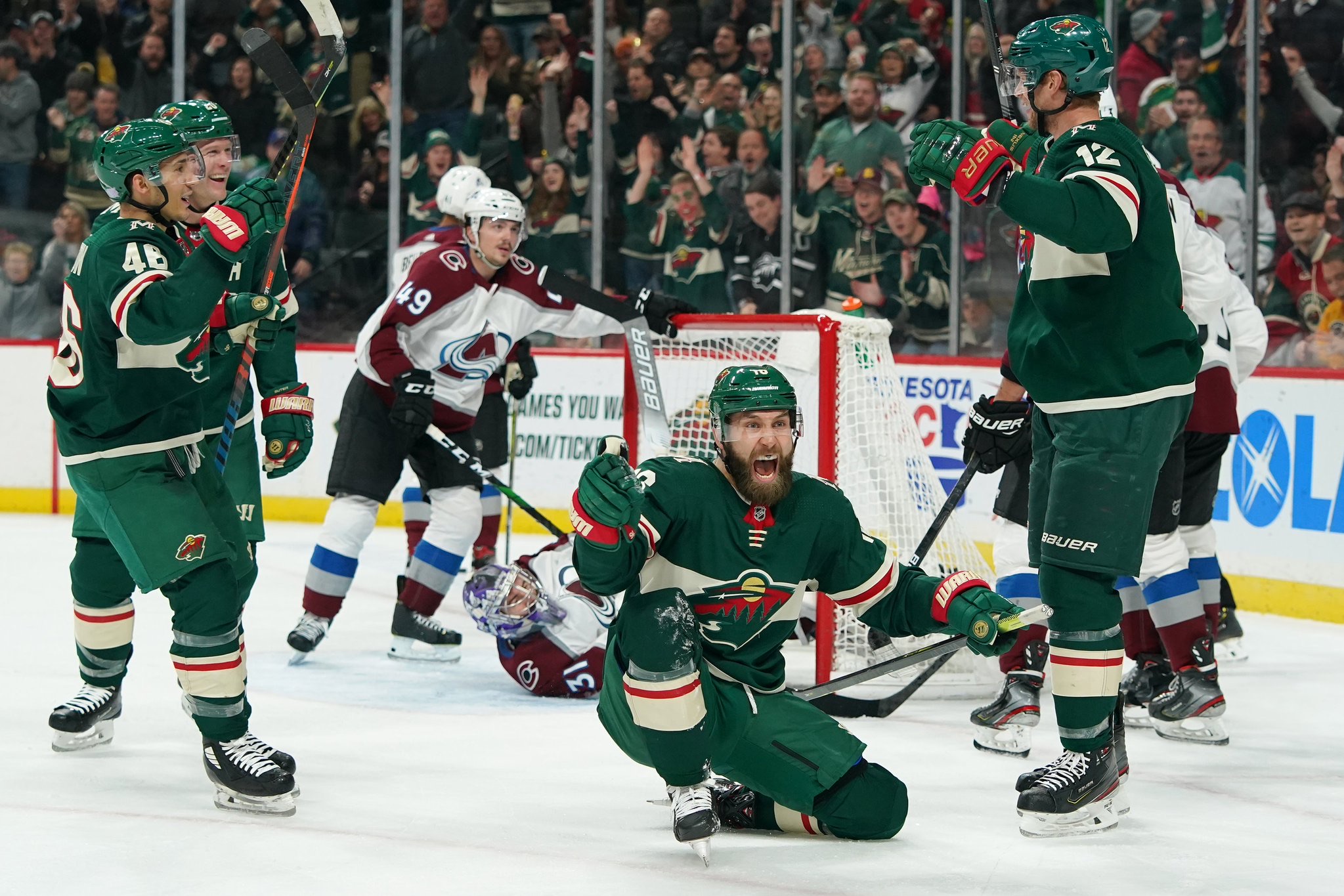 Minnesota’s Jason Zucker celebrates what turned out to be his game winning goal midway through the third period of the Wild’s 3-2 win over the Colorado Avalanche on Thursday night at Xcel Energy Center. (MHM Photo / Rick Olson)

ST. PAUL — A couple of things stand out to former Minnesota Wild center Wes Walz about the 2003 first-round playoff series between Colorado and Minnesota. First, it was a pre-series meeting complete with line combinations against the Avalanche written out on a board.

“It was going to be my line against (Peter) Forsberg’s line, and Jimmy Dowd was going to play mostly against (Joe) Sakic’s line,” Walz said. “We knew going into the series exactly what was going to happen. We were looking at the board, and we were all saying, ‘we can beat these guys.’”

Did the Wild know they were going to come back from the first of two 3-to-1 deficits in those 2003 Stanley Cup Playoffs? No. But Walz knew they could go into Denver and at least be competitive with their rival, and part of that was based on the fact that the Wild had already beaten Colorado during the regular season.

Those 2003 playoffs is something current Wild goaltender Alex Stalock remembers watching at home as a fan.

“I lived that as a teenager,” Stalock said. “And man, that was an incredible run. Every night you sat down and watched those games, every minute.”

The Wild, still a relatively new franchise, didn’t need home-ice advantage to make it all the way to the Western Conference Finals that season.

The first series ended with an overtime, game-seven win in Colorado. It was a season and a series that sparked a rivalry with the Avalanche. Walz was one of the leading scorers for the Wild in the playoffs that year, with 7 goals and 13 points in 18 games behind leader Marian Gaborik’s 9 goals and 17 points.

“I still believe that big rivalries are created through playoffs,” said Walz, now retired and a Wild analyst with FSNorth. “But with Colorado, it’s always just kind of been there. We beat them in 2002-03. There were a lot of spirited games that we played during regular-season games that specific year.

Maybe, as he goes on to mention, it was the “astronomical” payrolls of the Wild opponents in those early years of the franchise. Or it was the hall-of-famers on the other bench that got the Wild playing so hard against them because “we were just scared to be embarrassed because they were that good,” Walz said. 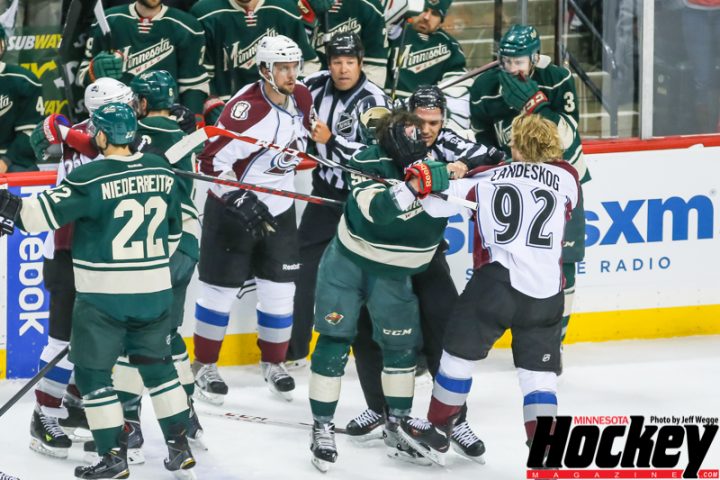 Tempers can flare when the Wild and Avalanche meet and they did just that in Game 6 of their 2014 Stanley Cup first-round series on April 28, 2014 at Xcel Energy Center. (MHM Photo / Jeff Wegge)

The playoff history between these two teams includes 2008 when Colorado beat the Wild in six games and then again in 2014 when the Wild once again won with some game-seven, overtime-magic at the Pepsi Center, this time with the winner from Nino Niederreiter. Each matchup with these two clubs has been in the first round of the playoffs.

“When you’re looking at just a pure rivalry on the ice between different teams, it seems like this rivalry that we have built between Colorado has been something that’s been very real and it feels like it’s been there almost since day one,” Walz said.

The Wild and Colorado have the “rival” label placed on their games because they play in the same division. Colorado is the only team that’s played in the same division as the Wild even dating back to before the NHL realignment 2013-14. The Wild hold a 52-41-11 (29-18-5 at home) all-time record against the Avalanche, the second-most points (115) and wins against any NHL franchise. That record includes a 3-2 Wild victory over Colorado on Thursday.

“We brought up the word ‘rivalry’ before the game tonight,” Stalock said.

But rivalries aren’t what they used to be – “not as mean and dirty as they used to be” – changing over the past 15 to 20 years, according to Walz. With the roster turnover in today’s NHL, it’s more likely that a fan base becomes attached to the history of a particular rivalry rather than it sticking with the players.

For the Wild, only Mikko Koivu is left from the 2008 team that lost to Colorado. Even the 2014 team a few years ago only boasts Koivu, Zach Parise, Ryan Suter, Jared Spurgeon and Jonas Brodin as players that remain.

“There’s players coming and going so often,” Walz said. “You don’t see guys playing in one spot their whole careers anymore. You very rarely see it.” 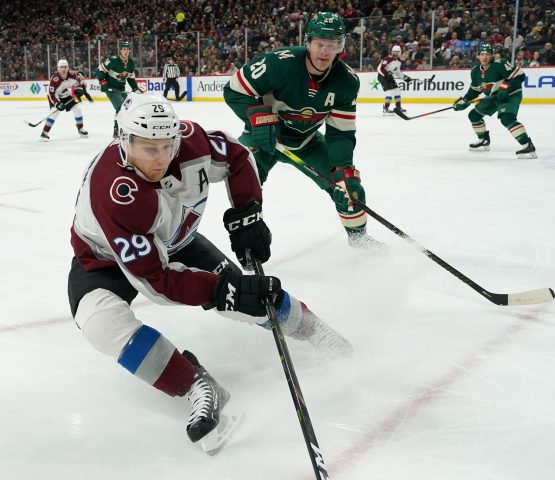 But Walz suggests that it’s not so much a rivalry with a certain team as it is a different way of looking at things. The Wild will look at the Avalanche and the specifics of how to beat them, for instance.

“It’s Nathan MacKinnon. ‘How can we try to keep him off the scoreboard to give ourselves a chance to win?’” Walz said.

The Wild didn’t keep MacKinnon off the sheet completely on Thursday  – he had an assist on the first of two Colorado goals from Cale Makar – but the overall goal was accomplished with the Wild win. A little payback for a 4-2 Wild loss in Denver back on Oct. 5.

Mats Zuccarello and Jordan Greenway scored goals 53 seconds apart early in the second period for a 2-0 lead before Makar tied it later in the period. Jason Zucker scored the game-winner about halfway through the third period. Stalock made 27 saves for his second consecutive victory; he’s 5-3-0.

“I think we did everything we could tonight,” Greenway said. “Everyone contributed. Al (Stalock) played great. Everyone did their roles, which led to the win.

With the Wild swimming near the basement on the NHL standings, a playoff meeting between these two might not be on the horizon for a while. Even with a disappointing start to the season for the Wild, momentum can always shift on a dime. Walz remembers that from when the team was staring at three potential elimination games against Colorado back in 2003.

Following the game-four loss, the Wild had a bad practice before leaving for Colorado and “our coaches weren’t happy,” Walz recalled. They had a team dinner/meeting the following night to discuss matters with coach Jacques Lemaire and then-general manager Doug Risebrough, who did 90 percent of the talking, according to Walz. Risebrough talked about his years as a player and winning Stanley Cups with the Montreal Canadiens.

“The one thing that stuck out to me in this conversation, when he spoke for about a half an hour, was how momentum can change a series instantly,” Walz said. “Winning one game can kind of get the ball rolling.

“I remember walking out of the meeting that night in the hotel. Honestly, I’m not just saying this, I really couldn’t wait for the game to start. I wanted to walk over to Pepsi Center that night and play.”

The Wild came back with a trio of 3-2 victories in games five through seven, with the last two coming in overtime on goals from Richard Park and Andrew Brunette.

The Wild haven’t been back to the Conference Finals since 2003.

Perhaps it can serve as motivation for the current Wild team, to inspire the younger generation of kids, like Stalock during that magical run.

“It’s, I think, what a lot of guys in here want to do for the kids watching now,” Stalock said. “They can have the memory and say, ‘I remember when you guys did this.’ So I think that’s our goal.”