Romanchuk Back Behind The Bench – Part I 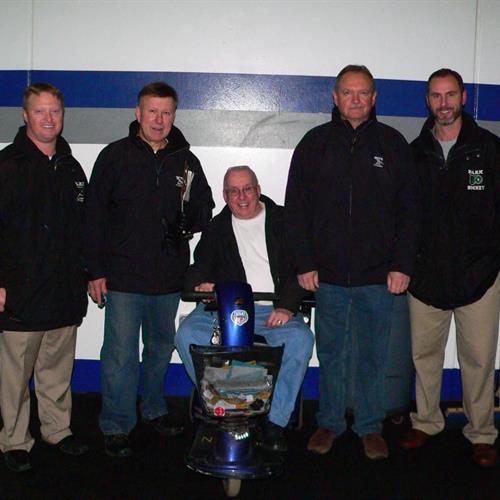 In a day and age when a head high school hockey coach has a tenure about as long as the life of the average white-tail deer, Steve Romanchuk’s 43-year coaching career is truly something to marvel about. The co-head coach (along with Jim McElmury) at Tartan High in Oakdale, the former St. Paul Hill multi-sport star is still enthralled with the game of hockey and anxiously awaits the prospects for his 2012-13 Titan contingent. So far, so good, as the Tartans have started the season with a 2-0 log, registering identical 4-0 shutouts over Park-Cottage Grove and Rochester Century.

Romanchuk blushes when asked about his longevity coaching the sport for so many years. People who know him find him as a genial and easy-going sort who relishes the camaraderie of the coaching community. Despite his efforts to downplay his role in the game, an innate competitiveness still burns within.

“I still enjoy coaching the game,” said Romanchuk recently. “As much as the game has changed, kids are still kids and they just want to do as well as they can and to be a part of a successful team. The best thing about coaching is watching youngsters have individual success and trying to create the team aspect and then just being around young people is invigorating.”

Romanchuk has been the co-head coach at Tartan since 2006, when he and McElmury teamed up to lead the Titans after John Humphrey retired. The two met in college at Bemidji State and have coached high school hockey or summer camps for over 20 years together. McElmury was a star at Kellogg and an NAIA All-American at Bemidji State before helping the ‘72 U.S. Olympic team to a silver medal in Sapporo, Japan.

“Mac (McElmury) is a good friend and extremely knowledgeable,” remarked his co-coach. “Jim is very level-headed and he is so good dealing with our players. Nothing shakes him and he does a great job developing our defensemen.”

McElmury says, “Steve just has a great knowledge of the game and he is a real teacher of the game; he has a knack for instructing the players with the structure and guidelines they need to play the game properly.”

“I guess we’re real dinosaurs coaching at our age,” continued McElmury. “There aren’t many guys in their 60’s like us still in the game. We get a lot of satisfaction out of seeing our kids excel and in helping them have a good experience playing high school hockey.”

Sue Romanchuk has been married to her “hockey” man for 35 years and says, “I am extremely proud of Steve’s hard work and dedication to hockey and to the kids who play for him. I can attest to the many hours of research, strategy, and planning he puts into hockey. Our family room and kitchen is decorated with, plays, diagrams, and stat sheets. I know how important hockey and the kids are to Steve. It is evident by the many who we run into and by the number that still keep in touch with us.”

Nearly all of his 43 years coaching hockey have been with high school programs, except for four years when Steve was coaching his son Ryan’s teams and watching his daughter Stephanie play the game for North St. Paul. In addition, his first two years of hockey were spend at Blessed Sacrament, a Catholic elementary school in St. Paul, starting in 1971.

“We played outside at the Hazel Creek playground and it was great,” said a smiling Romanchuk, clearly pleased to be remembering the early stages of his career. “I taught grades 5-8 and was the only coach for both hockey and baseball. One of the years, we lost the city hockey championship at the Civic Center. Playing in the new Civic Center at 9:00 am on a Sunday was quite a thrill for the kids.”

Romanchuk had just graduated from St. Mary’s University in Winona, where he played two years as an all-round center for Don Joseph’s Redmen. St. Mary’s was strong in those days, with the likes of players like Bob Paradise, Bill Rossini, Jim Pohl, and Terry Skrypek. In high school at St. Paul Hill, before the school merged with Murray (the girls’ school), Romanchuk was a standout in football, hockey, and baseball after growing up on Ames Avenue. He was a three-year regular on the ice playing for coach John Boland. After graduating in 1967, he headed north to play both football and hockey at Bemidji State.

Bob Peters was in the midst of building a small-college dynasty in the north woods but Romanchuk competed first for the Beaver football team. A quarterback and halfback at Hill, he played as a freshman and even punted for the squad. With all the talent Peters was stockpiling on the ice, Steve played on the junior-varsity.

After originally considering St. Mary’s as a senior, he decided to transfer to the Christian Brothers school for the 1969-70 school year. He had to sit out a year and then had two solid years as a sturdy two-way player. The Redmen finished second to MIAC powerhouse Gustavus Adolphus in both his junior and senior year. A serious student, Romanchuk earned his degree in secondary social studies and got his coaching certificate, too.

His high school coaching career began in 1973 when he became Terry Skrypek’s assistant at Hill-Murray. The Pioneers were already an imposing force in high school hockey and Romanchuk enjoyed the talented players and good kids he found in the classroom at the Maplewood school. He stayed on for three years and got to witness his younger brother Rod star for the Pioneers. Hill-Murray became the first private school to earn a berth in the Minnesota state high school hockey tournament in 1975.

Itching to run his own operation, Romanchuk took the head coaching job at Woodbury in 1976. The Royals had just branched off from Park and Steve was eager to put his stamp on a new program. The team practiced mostly at the Park-Cottage Grove rink connected to the high school but they also practiced outside at times. In the fall, he coached boys’ soccer.

During this time, he and McElmury started the McElmury-Romanchuk Hockey School. After seven years building the Royals, he became the head man at Park for 15 years (1983-89) and had the Indians/Wolfpack skating among the top teams in the metro and state. Park-Cottage Grove won four St. Paul Suburban titles and developed a strong skating club with skill and savvy. Already frustrated for years in not earning a berth at state despite superb talent and depth, Park lost four sectional finals during Romanchuk’s tenure – each of them by one goal.

He took a four-year respite from high school coaching to devote more time to his children’s hockey exploits – coaching his son’s youth squads and watching his daughter play as girls’ hockey was just starting to evolve. Romanchuk came on the scene as an assistant at Tartan, with old side-kick McElmury, in 2002, with John Humphrey as the top boss. Tartan earned two berths in the Class AA tournament, in 2003-04 and 2004-05.

The Titans were handled by both Wayzata (6-0) and Holy Angels (6-2) in their first foray but the next year, they fared much better. They downed Elk River 4-3 in the first round and were competitive in a 4-2 loss to eventual-champion Holy Angels. They took fourth-place after losing 5-3 to Duluth East.

Talk to Steve Romanchuk for long, however, and it is clear he doesn’t equate success in coaching with win-loss percentages and state berths. Not that he minds winning, of course, but it doesn’t define his career and he is content with what he has accomplished. Just think, if he lasts 21 more years, he will have spent as much time in coaching hockey as John Gagliardi did coaching college football!

Known almost universally as “Roman”, the Tartan co-head coach just didn’t put his time in as a social studies educator. He wrote his own textbook years ago and was recognized as an outstanding teacher in various positions for District 833. Romanchuk taught American History, Advanced Placement American History and Sociology and remains today a voracious reader of all things history.