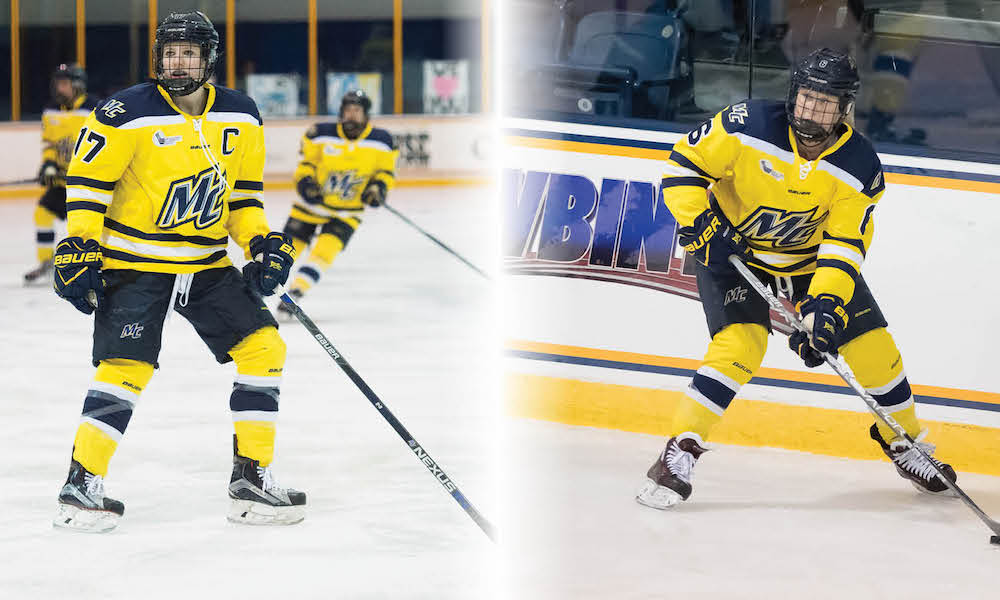 An early-season non-conference game on a rainy Sunday afternoon isn’t a recipe for a packed house. Nonetheless, people steadily filtered into Ridder Arena at the University of Minnesota on Oct. 1. But there was something a little strange happening. As they entered, fans closed their umbrellas and a parade of people removed coats to reveal blue and gold cheering colors instead of maroon and gold.

Those are the colors of the Merrimack Warriors, a program just kicking off its third season as a Division I school. Merrimack is walking the slow, arduous road any new program must take, but it’s starting to find success. At the core of the Massachusetts squad you won’t find players from its own hockey-rich state, but a handful of players from Ontario and Minnesota, which explains how a young program had a cheering section 1,200 miles from home in Minneapolis.

“This is actually a dream come true for me,” says Jessica Bonfe. “I’ve been wanting to play the Gophers ever since I committed here. I just wanted to come here and play in front of all my friends and family.” Bonfe is one of five Minnesotans on the team. She’s also a co-captain with fellow Minnesotan Paige Voight. 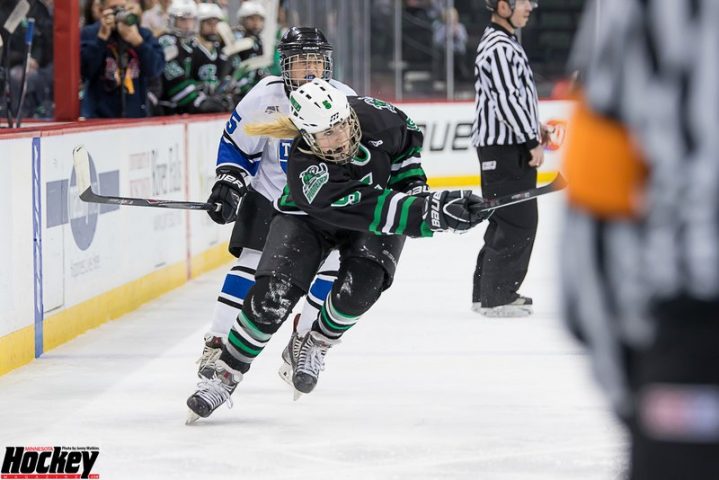 Prior to the second game of the weekend series, the co-captains were all smiles. Despite being outshot 57-19 in the series-opening contest, Merrimack grabbed a victory. “There are honestly no words to describe it other than it feels kind of like it was our national championship,” Bonfe says.

The elation is hard-earned. It’s been a difficult road building this program from nothing. Merrimack finished its first season in Hockey East’s basement. Year two, it only finished ahead of Maine. Through 10 contests this year, Merrimack is 3-5-2, and the junior co-captains are starting to see returns on what they’ve invested in the program.

“It is a lot different now,” Bonfe says. “Coming in, we didn’t have any upperclassmen. Being juniors now, it is kind of like we have, I don’t want to say ownership, but a higher level on the team.”

The first years of a new program are tough. The team has to build a culture and doesn’t have the luxury of built-in fans, systems, or leadership. “It was really hard,” Voight says. “Our coaches, they did a really good job. We went to them for everything, which most college coaches don’t have to deal with because that have that leadership and [upperclassmen]. They made us create the leadership we have today.”

“It’s a little wild,” says coach Erin Hamlen, a legendary player in her own right. She was a member of the US National Team and the first female player in the ECHL, among a host of other accolades. “I think year one and even part of year two, we were kind of the captains as coaches. That’s a hard situation to be in because we don’t want to. We want them to take control of the locker room and really let them lead the whole crew.”

For a team built out of the dust, Merrimack has taken large strides in three years, playing in one of college hockey’s toughest conferences, alongside two nationally-ranked teams and three more in the hunt. “For sure, [this season] feels different,” Hamlen says.

In six games this season against teams getting national ranking votes, they’re 1-3-2. They’re competing. “Certainly, we always feel that we have an opportunity to win, and we always want to put ourselves in the best position,” Hamlen says. “We know we still have a long way to go, so I don’t think there are any illusions from our fans or from us that we’ve reached the point where we are respected enough that people think they’re going to lose to us.”

Hamlen’s modesty masks how the team is competing, even if they aren’t feared. Even more important, the players appear to feel a sense of accomplishment in how far the program has come in just over two seasons. “If you ask any team, any freshman,” says Bonfe, “they’re going to have their struggles getting used to [college hockey] because it is a whole different experience from high school. So, the adjusting part for us was just hard because we were all new to the program, and there was no one there to guide us other than the coaches. Being there all together, we helped each other out and found our way.”

Editors Note: This article was reprinted from a full-featured Minnesota Hockey Magazine digital issue.  Like what you see?  Get a back issue or subscribe today on the PressPad mobile app platform for Minnesota Hockey Magazine via Apple Store and Amazon/Kindle.  Don’t miss out!  Get all 8 issues for this upcoming season sent directly to your email box, buy a single issue or pick up the printed version at many local stores.   Pick up this 96 page magazine at Bylerly’s, Lunds, Coborn’s, Mill’s Fleet Farms, Cub Foods, Hyvee’s, EconoFoods, EconoMarts and many other independent magazine distributors in Minnesota or contact Scott@MNHockeyMag.com.