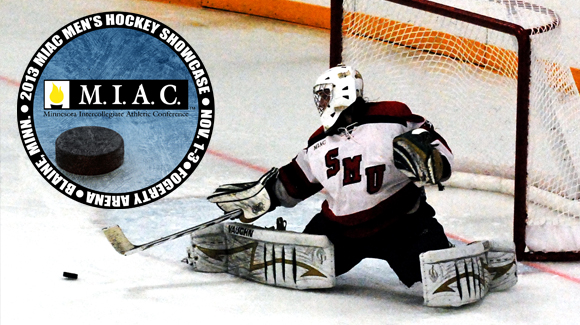 BLAINE, Minn. — The 2013 Minnesota Intercollegiate Athletic Conference (MIAC) Men’s Hockey Showcase concluded Saturday with a pair of high-scoring affairs and a thrilling come-from-behind win. Saint Mary’s rallied in the final eight minutes for a victory, Concordia was impressive with a six-goal performance, and St. Thomas surged ahead and held on for a win in the ninth and final game of the weekend.

The Cobbers improved to 2-0 with their second impressive performance of the weekend, scoring four in the first and two in the second en route to a 6-1 win over Hamline. The Cardinals trailed St. Olaf with time ticking away in the final period, but they got two big goals to score a 3-2 victory. In the final game of the day, St. Thomas broke open a close game with four straight goals, then survived a late Gustavus push to score a 5-3 victory.

CONCORDIA 6, HAMLINE 1 | Box Score |
Any drama in the day’s first game disappeared by the end of the first period, as the Cobbers put up four goals in an 11-minute stretch in the opening frame en route to a dominant 6-1 win over Hamline. Concordia added two more goals in the second, while the Pipers scored their lone tally in the third. The Cobbers wrapped up the Showcase with a 2-0 record, while Hamline went 0-2.

Jordan Christianson led the Concordia offensive onslaught, scoring two goals in the win. Christianson netted the game’s second goal 12:53 into the first period, and closed the Cobber scoring with a power-play goal to make it 6-0 14:21 into the second. Dan Hrabowych had a big day as well, netting one goal and three assists for a four-point effort, Jordie Bancroft had a one-goal, two-assist day and Caleb Sudeman had one goal and one assists as a quartet of Concordia players registered more than one point.

Adam Wiertzema scored the other Cobber goal, while Andrew Deters, Tucker Coborn, Joe Becker and Jeremy Johnson all tallied assists in the win. For the second time in as many days, Concordia goalie Chris Neamonitis starred, stopping 36 shots and allowing just the lone power-play goal a day after he shut out Saint John’s.

Hamline ended the Cobbers’ bid for another shutout 5:27 into the final period, when Tyler Gonzales scored on a power play, with assists coming from Dan Barktowiak and Joe Rubbelke. Karel Popper manned the net in the first period, stopping four of eight shots, and Nick Heimer finished up with 11 saves and two goals allowed in two periods. Hamline held a significant edge in the shots column, 37-21.

SAINT MARY’S 3, ST. OLAF 2 | Box Score |
The Cardinals trailed the Oles 2-1 with just eight minutes to play, but Saint Mary’s scored a pair of goals to surge ahead and steal a 3-2 win in one of the weekend’s most entertaining – and dramatic – games. Thanks to the come-from-behind win, SMU wrapped up the Showcase with a 1-1 record, and St. Olaf finished the weekend 0-2.

After a scoreless first period, Saint Mary’s Brad Denney found the back of the net just 39 seconds into the second to put the Cardinals ahead, 1-0. Bobby Thompson assisted on the goal. However, St. Olaf was ready with an answer with just 1:14 left in the period, as Marc Richards scored off a Brian Hickey assist to tie the score 1-1 heading into the final period.

And what a final period it was. The Oles capitalized on a power play just 2:27 into the final frame to pull ahead, 2-1, when Matt Guerts lit the lamp. Mike Erickson and David Rath assisted on the go-ahead goal. But Saint Mary’s saved some magic for the final eight minutes. Thompson tied the game with a power-play goal with 7:03 to play, with Martin Gruse and Bob Marx assisting. Then, with just 2:38 to play, the Cardinals came through in the clutch as Gruse’s power-play goal gave his squad the dramatic win. Jed McGlasson and Ryan Griffiths assisted on the game-winner.

Both netminders played well in Saturday’s second game. Saint Mary’s Christian Gaffey stopped 36 of the 28 shots he saw to earn the win in goal, and St. Olaf’s Steve Papciak made 27 save while allowing the three goals in the loss. St. Olaf held a 38-30 edge in shots, while the Cardinals were 2-for-5 on the power play to just 1-for-7 for the Oles.

ST. THOMAS 5, GUSTAVUS 3 | Box Score |
The Showcase concluded with an entertaining, high-scoring game between teams who both entered the contest 1-0. St. Thomas surged out to a 5-1 lead, then held off a furious Gustavus rally in the third period for a 5-3 victory. The Tommies wrapped up an entertaining 2-0 trip through the Showcase after winning in overtime Saturday, and Gustavus finished even at 1-1.

St. Thomas didn’t waste any time showing off its firepower, as the Tommies took a 1-0 lead just 21 seconds into the game on a Nick Nielsen goal with Alex Altenbernd assisting. However, Gustavus had an answer late in the period, when Core Leivermann netted a power-play goal with Gavin Tufte assisting with just 3:35 to play in the first.

St. Thomas took control of the game by scoring the next four, with two in the second and two in the third. Chris Cass and Altenbernd each scored in the second and Tyler Grubb and Thomas Williams each netted a goal in a 2:22 stretch in the final period as the Tommies seemingly put the game away, up 5-1.

But the Gusties wouldn’t go down quietly. With 7:33 to play, Schyler Adams scored off an assist by Zach May to cut the St. Thomas lead to three, and Tyler Lapic fed Darrin Lapic to make it a two-goal game less than a minute later as part of a flurry that gave Gustavus sudden hope. The Gusties had a couple chances to cut it even closer as the clock wound down, but couldn’t get any closer as the Tommies hung on for the 5-3 victory.

Altenbernd starred for St. Thomas, netting a goal and three assists for a four-point night. Gubb and Nielsen each had a goal and two assists and Derek Jacobson had two points as seven different Tommies recoded points in the win. Drew Fielding was sharp in goal for the second-straight game, making 29 saves to earn the win and snuffing out the Gusties final hopes at completing the comeback.

Gavin Tufte was the only Gustavus player with more than one point thanks to his two-assist performance. Seven Gusties recorded points in the loss. Patrick Sullivan started in goal and made 16 saves in 48:22, allowing all five goals. John McLean subbed in after Sullivan went down in a collision, and he stopped all three shots he faced over the final 10:37.

RE-LIVE THE SHOWCASE DRAMA
The 2013 MIAC Showcase was another rousing success. Fans can re-live all the action on the event’s home page, which contains result, box scores and recaps from all nine games, as well as photo galleries from Friday’s action. Webcast America offered live broadcasts of all six games on the South Rink, and those games can be viewed on-demand, or purchased on DVD on the company’s web site.