Saint Mary’s On The Rise 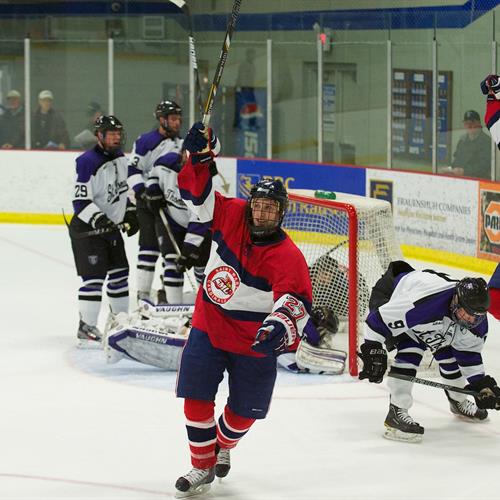 It was “Hockey Day in Minnesota” last Saturday, Jan. 19 and the big day lived up to its billing. In Grand Rapids, FSN highlighted high school hockey with two boys and one girls game in sub-zero conditions on Lake Pokegema. The top-rated Gopher men’s team hosted heated rival North Dakota at Mariucci in their Iast game as WCHA conference foes at 5 p.m. To top off the day, the Wild was to debut the strike-shortened 2012-13 season at the Xcel at 8 p.m. with their game against the Colorado Avalanche. That was just the television sample.

Viewers watched a tough and physical Grand Rapids club beat defending state champion Benilde-St. Margaret’s with an overtime goal in near blizzard conditions (isn’t this what we want to see!). The Gophers and North Dakota played to an exciting overtime tie and native Minnesotan Zach Parise netted two assists in the Wild’s 2-0 opening win.

A hockey buff could have enjoyed 13 hours of hockey in the comfort of one’s home just watching those contests and two or three more if you stayed up to witness the high school girls’ hockey game between Grand Rapids/Greenway and Hibbing on tape delay. Of course, many puck enthusiasts were out on Lake Nokomis to take in the U.S. Pond Hockey Championships, if not playing in it themselves. Thousands more poured into rinks all around the state to witness high school and youth games.

However, after viewing most of the action on TV throughout the morning and afternoon, this hockey enthusiast ventured to the St. Thomas Ice Arena in Mendota Heights to attend the MIAC battle between visiting Saint Mary’s and host St. Thomas. While the Tommies have dominated the regular season and post-season in the league for much of the past 30 years, the Cardinals from Winona have struggled in their attempts to become contenders.

Picked for last in the conference by the MIAC coaches for the 2012-13 season, the Cardinals have been the surprise of the league. Saint Mary’s, though 7-8-1 overall, was 5-1 in league play while St. Thomas once again held first-place with a 6-1 mark entering Friday night’s game in Winona. This was rare territory for Saint Mary’s, a mid-season attempt to capture first place for themselves. A partisan crowd of 400 watched the Cardinals and Tommies battle to a 0-0 tie. SMU’s Andy Scheib had 37 saves while UST netminder Drew Fielding stopped all 29 shots in the duel shutout.

In the rematch the next night, Saint Mary’s found out it is not quite ready for prime time as an experienced and confident Tommie squad easily handled the visitors 7-2. Sheib constantly faced point-blank opportunities as St. Thomas outshot Saint Mary’s 44-18. St. Thomas head coach Jeff Boeser, one of the greatest players in Tommie history, had his players ready for the rematch as they played with precision all night. In the initial period, the Tommies outshot the outmanned Cardinals 13-0 and led 2-0 less than six minutes into the game

Saint Mary’s head coach Bill Moore said, “St. Thomas trapped us and slowed us down and dictated the pace; they are just a very good hockey team. We expended a lot of energy on Friday and couldn’t match it back at their rink when they had six new guys in their lineup. They are physically stronger than us and we are built to play on a bigger ice surface but we have to learn how to compete on the NHL-sized rinks.”

While Saint Mary’s generally was able to skate with St. Thomas, the Tommies had a clear edge when it came to puck control and offensive firepower. The Cardinals forwards are small and they were unable to penetrate the Tommie defense for most of the game. St. Thomas had one penalty the entire contest, a five-minute major late in the first period, and the Cardinals were unable to muster a shot on goal, let alone set up in the St. Thomas zone. It was evident after 20 minutes that the Cardinals are no doubt improved but they have some growing to do to match the skill and calm of the powerhouse Tommies.

St. Thomas possesses depth and balance throughout their lineup with good size and speed. They quickly established a quick pace to the game and were in firm control from the opening whistle with their aggressive forecheck and pinpoint passing. Senior defenseman Robbie Vannelli, son of St. Thomas Academy co-head coach Tom Vannelli, wristed in a 45-footer from the center point over Sheib’s shoulder to give the Tommies a 1-0 lead after taking a feed from senior captain Travis Baker at 12:22. Less then two minutes later, Riley Horgen scored after a goal-mouth scramble for the first of three power-play markers.

By midway through the second stanza, St. Thomas was outshooting Saint Mary’s 22-5 and led 3-0 after Connor McBride tapped in a rebound just 20 seconds into another power-play chance. However, the Cardinals started to press as senior forward Nick Gorup scored on a backhand from out front to beat Fielding to make it 3-1 after taking a nice pass from Ryan Griffiths from behind the net. But 40 seconds later, Sheib mishandled a clearing pass after racing out of the cage. Alex Altenbernd blocked it and then wristed in a 15-footer before Sheib could get back to defend the goal.

Yet, 25 seconds later, the Cardinals responded when Austin Balco scored his eighth goal of the campaign with assists to Nick Nagel and Dylan Dock and it was suddenly 4-2 as Saint Mary’s started to create some chances. Putting on a late sure, the Tommies crashed Sheib late in the period and finally jammed in a goal by Alex Niestrom with just 0.4 seconds left on the clock. The last second tally was a killer for the Cardinals as the Tommies took a 5-2 lead into the final 20 minutes.

In the third period, St. Thomas continued their crisp team play. Tyler Gubb scored both of the Tommie goals in the session, both on gorgeous tick-tack-toe passing displays at 1:42 and 13:09. Clever with the puck in creating opportunities to score and with deft defensive play, the Tommies were the better team on this night and looked the part in every way. Too much savvy with the puck, more confidence, more experience in playing big games. St. Thomas looks like a heavy favorite to take conference laurels yet again.

Perhaps it was too much to expect the Cardinals to take the Tommies down at home and take sole possession of first place in the league standings. As it stands, St. Thomas (7-2-1) now leads the MIAC with Saint Mary’s third at 5-2-1. Second-place St. Olaf (6-2) and St. Thomas meet in another showdown for the top spot on Jan. 25 (Mendota Heights) and Jan. 26 (Northfield) and the physical Oles are always tough at home.

Meanwhile, the Cardinals have four series remaining in conference play, starting with games against Augsburg this weekend. They will also play two games at St. John’s, two games at home versus Concordia, and a home and away with Gustavus Adolphus.

Moore, a former all-conference performer with Saint Mary’s in the 1980’s, says, “We play six of those games on an Olympic-sized rink, so that is to our advantage but all those games will be tough. We’ll have to play with heart and go to the net better than we did against St. Thomas if we want to stay in the race.”

We’ll see how Saint Mary’s responds for the remainder of the year but the future looks promising for the club. They played seven defensemen against the Tommies and three are freshmen (Adam Robson of Burnsville, Mike Wolter of Antigo, Wisconsin, and Greg Chapman of Meridan, Idaho). There are just four seniors on the roster, though starting goalie Andy Scheib is stellar. They will also have to replace back-up netminder Jason Horstman, who is also a senior and who was supplanted by Sheib after playing regularly the past few seasons. Sheib, incidentally, had a shutout streak of 119 minutes broken when Vannelli’s shot beat him midway through the first period.

Freshman forward Mike Hill of Fort Worth, Texas is the team’s leading scorer with 21 points (11 goals) and led the MIAC in goals, assists, and points entering last weekend. Bobby Thompson of Centerville was third in the league in points with 16 (eight goals and eight assists) and heads a strong junior class of eight players.

The Cardinal lineup against St. Thomas has just three Minnesotans on it and players from 11 different states. St. Thomas has half of its roster from Minnesota; all the players on both teams have played at least one year of junior hockey and most two. Saint Mary’s is just one of three schools that supports a junior varsity program and it appears that Moore is turning the corner to MIAC respectability. He has assembled a squad of good skaters – many whom were captains and leaders on their respective junior teams.

“We have definitely taken a step forward this year in competitiveness,” continued Moore. “We’ve got to recruit some more goal-scorers and establish multiple lines that can score. We’ll lose two senior goalies but sophomore Christian Gaffy is a very capable goaltender and we also have a freshman on the junior varsity, Mitch Fernsler, who has a lot of potential.”

As with most programs, it takes time to get quality players and then more time to instill a winning attitude and a commitment to winning. Saint Mary’s will not be finishing last in the MIAC this year and for some time to come. Carving a place in the upper echelon of the league on a consistent basis is another matter. For the next month, they are hoping to stay in the race for their first conference title since 1988. No matter what occurs, the Cardinals are definitely flying on an upward rise.