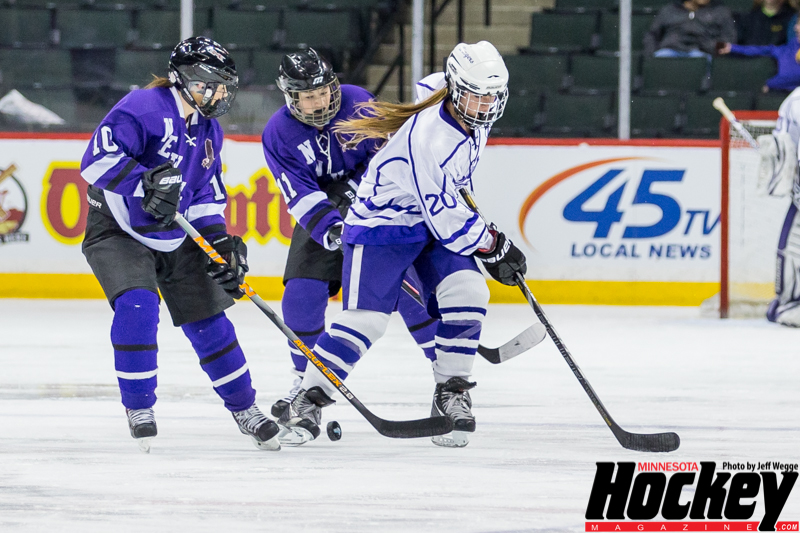 The second quarterfinal of the girls Class A state high school hockey championship pitted the #3 seed Red Wing Wingers and New Ulm Eagles.  The Wingers rode the crest of senior Nicole Schammel’s natural hat trick in the first period and cruised to a 7-2 quarterfinal round victory over the Eagles.

Schammel, a Ms. Hockey finalist, added to her impressive totals as the senior as she finished with three goals and three asists for the game giving her 61 on the season.  The Wingers led 5-0 after one and 7-0 after two periods and never looked back.

Schammel’s offensive effort on Wednesday afternoon lifted her totals to (269g-186a-455pts) for her incredibly productive high school career.  Along with senior Emily Stegora, who had (2g-1a-3pts) on the game, the duo signed national letters of intent to attend Minnesota State Mankato to play Division I women’s college hockey.

The Eagles notched a pair of goals, both by one in the second period b Brittany Denn at 5:08 and then scored the game’s final goal at 8:51 of the third period.  The goals were the 34th and 35th of the season for Denn.

The Wingers (23-6-0) finished third in the 2013 State Tournament last season and are looking to improve on that standing this season.  If the performance against the Eagles was any indication, the Wingers will give the defending state champion Blake Bears all they can handle and the semifinal which is a rematch from earlier in the year that the Bears won 5-2.  It also is a rematch of last year’s semifinal game that Blake captured by a 6-3 score.  The two teams  face off on Friday for the first semifinal at 11am.

This season marks the fifth appearance for the Wingers and fourth in the last five years. The Eagles (18-8-0) are in the midst of their sixth State Tournament appearance and fell out of last season’s tournament after a consolation round loss. The will look to keep the season alive with a win against the Alexandria Cardinals at Ritter Arena at 10am Thursday morning.