Farm Report: One for the Win Column 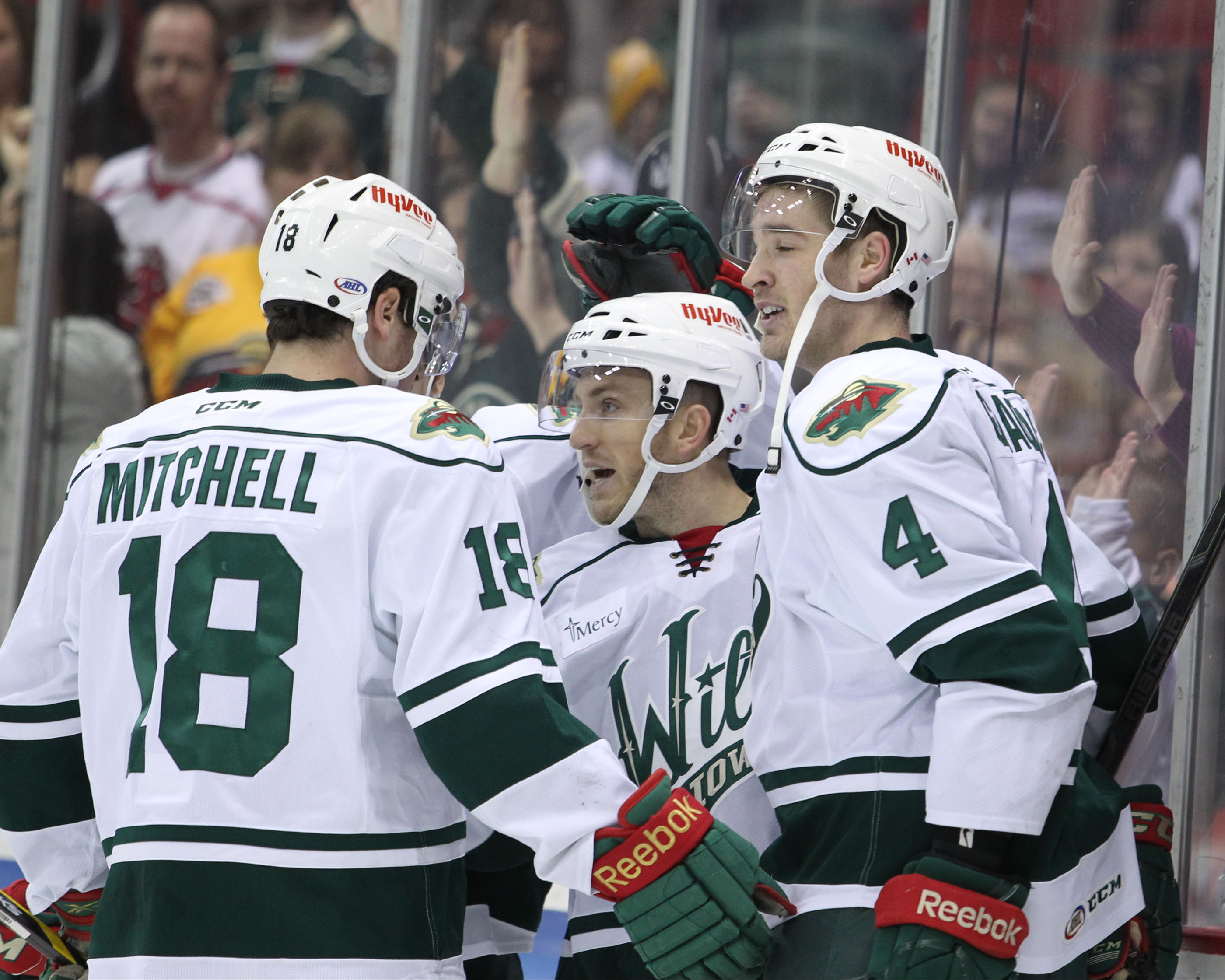 DES MOINES – The home crowd went home happy after the Iowa Wild’s sixth game of the season on Saturday, as the Wild cruised to a 4-1 victory against the Charlotte Checkers behind 35 saves by goaltender Johan Gustafsson and a pair of Jordan Schroeder goals at Wells Fargo Arena in Des Moines.

The win, however, was Iowa’s first of the season as they started out on a five-game losing streak.

After losing 5-1 to Charlotte the night before, defenseman Justin Faulk said that they got together the next morning and decided that “enough is enough” before the game that night. He said they played with more desperation in the win.

“The bleeding had to stop and it was a good game for us to build on and take into Milwaukee,” Faulk said.

In the first five games of the 2014-15 season, the Wild scored just eight goals (1.6 goals per game) and surrendered 20. The team especially struggled on Oct. 18 in a 4-0 loss at home to the Milwaukee Admirals and in the next game, a 5-1 loss to Charlotte on Friday.

“Nobody’s happy about what’s going on right now,” Iowa coach Kurt Kleinendorst said after the Oct. 18 loss. “We’re not going to sit here and filter out a bunch of excuses or anything like that. We’ve got to be better.”

Kleinendorst said that he was surprised at the issues they were having at that point.

“I really didn’t think we were going to have issues like we’re having right now,” Kleinendorst said. “So I’m a little bit surprised myself, but now it’s a matter of taking a step back, just evaluate things, see where we’re at with regard to everything: personnel, systems, what we’re doing, when we’re doing it and how long we’re doing it and just move forward from there.”

In the 4-0 loss to Milwaukee Gustafsson allowed four goals on 24 shots one night after giving up four goals in the first period against Milwaukee and being replaced by John Curry.

After Friday’s 5-1 loss to Charlotte, a game in which Curry got the start and allowed five goals on 25 shots, Iowa captain Stephane Veilleux stressed the importance of bouncing back in the next game.

“We’re all disappointed and frustrated,” Veilleux said. “We have to bounce back tomorrow. There’s no other way to play better and to play a whole 60 minutes tomorrow.”

In the win on Saturday, Kleinendorst had made some changes in the lines which included the combination of Tyler Graovac, Zack Mitchell and Schroeder. The result was two first-period goals from Schroeder, both of which Graovac assisted on.

Schroeder is Iowa’s leading scorer so far with eight points (three goals, five assists). Graovac is right behind him with six points (one goal, five assists).

He’s (Schroeder) a little guy, but he plays fast, he plays gritty,” Faulk said of Schroeder, a Prior Lake, Minnesota native, who is listed at 5’9″, 179 pounds on the team roster. “He created a lot, made a lot happen by himself with the speed and the way he worked tonight.”

Defenseman Gustav Olofsson underwent a shoulder procedure and will be out “long-term” according to Kleinendorst.

Forward Raphael Bussieres was absent from practice last week and missed both games this past weekend after sustaining a concussion against Milwaukee on Oct. 18.

Cody Almond left Saturday’s game with a lower-body injury, but Kleinendorst said they wouldn’t know how serious it is until Monday.

On Oct. 21, Iowa assigned defenseman Corbin Baldwin to Alaska of the ECHL.

The Wild hit the road for the next three games playing at Milwaukee on Wednesday before playing two games at Oklahoma City Nov. 1 and 2. Wednesday’s and Saturday’s games will start at 7 p.m. with Sunday’s game beginning at 4 p.m.

The Wild will return home against Rockford on Nov. 6.