Schwartz: Breaking in With a Bang 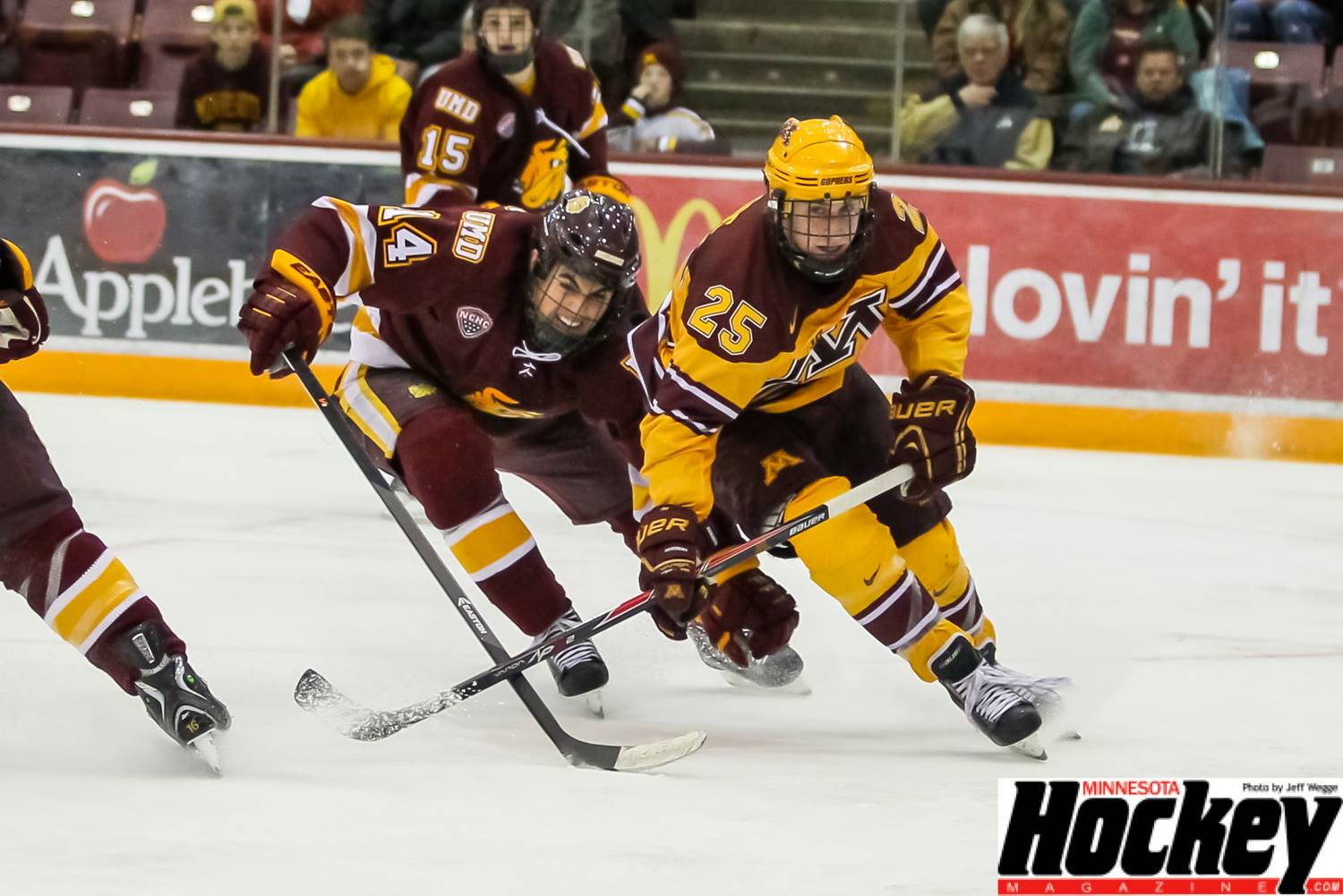 Though in its rookie year, the NCHC is hardly new and is taking a backseat to no one. 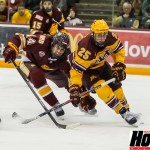 Featured Image:
For UMD freshman Alex Iafallo (left) and Minnesota rookie Justin Kloos, pride, not points, will be all that’s on the line when they meet in the regular season.
(MHM Photo/Jeff Wegge)

Establishing a brand new hockey conference in a marketplace that is already saturated with them is not an easy task. However now seemed a perfect time for the National Collegiate Hockey Conference (NCHC) to take their shot. But while this is the inaugural season for the league, it’s the culmination of a lot of planning, from schools who wanted to take advantage of the changing college hockey landscape

“You had a group of athletic directors that had the foresight to see that there was an opportunity with like-minded institutions to create a college hockey conference,” says NCHC Commissioner Josh Fenton, a Litchfield, Minn. native.

With Minnesota and Wisconsin leaving the WCHA and beginning play in the BIG Ten hockey conference this season, other schools formerly a part of the WCHA made their own plans. Six of the NCHC’s teams are former WCHA foes; Colorado College, Denver, Minnesota-Duluth, Nebraska-Omaha, North Dakota and St. Cloud State and two others (Miami and Western Michigan) come from the CCHA.

As the old conferences changed, so did the rivalries. North Dakota and Minnesota are no longer conference rivals (although they will be resuming a home-and-home series in 2016-17) and St. Cloud State and the Gophers will also lack the same intensity of a conference match-up (although they too will face each other in non-conference tilts). And while teams bring in their own rivalries from past conferences Fenton and the NCHC are not naive, knowing that the best rivalries take time.

“Six of our members competed in the WCHA in the past so they are very familiar with each other and we have two other members that were in the CCHA in the past so the amount of new rivalries that are being developed is definitely there but it’s not as if every institution in the conference is new to one another,” says Fenton. “I think it’s a continuation of many rivalries and it’s the formation of new rivalries and I think that’s good frankly I think that is great for the sport and certainly for our conference in general and then it also allows for programs to continue rivalries that have been developed in the past.”

The biggest rivalry may come from outside of the conference. Based predominantly in the upper Midwest, the NCHC will now draw from and recruit the very same pool of players as the WCHA and Big Ten. The best tool in recruiting, of course, are wins which means wins over out of conference foes will be even more important. Still Fenton says while the teams in the NCHC take an immense sense of pride in who they are, there is not a concerted effort to take down other hockey conferences.

“Anytime we’re winning games outside the conference that strengthens the conference competitiveness overall. So if we’re winning games collectively, more games out of conference the likelihood of us having more teams advance to post season play, in particular the NCAA tournament, there is a greater likelihood of that,” Fenton says. “Whether there is a rivalry or a sense of ‘we want to beat Big Ten, WCHA, or Hockey East or that we have something to prove’, I think we’re just focused on how we can position our members for the best possible way they can achieve success.”

Success has come early for the NCHC. Four of the conferences teams are ranked in the nation’s top 20, and two other teams receiving votes. At the top The St. Cloud State Huskies who are ranked number 1 by US College hockey Online. An impressive showing for a first year league.

“It speaks to the strength of the conference competitively, the history and tradition of the hockey programs involved,” says Fenton. “It’s certainly nice to have that be a part of our conference brand.”

A brand that might still be a tough sell for die-hard fans of old time college hockey. But the NCHC is showing us that the new school is here to stay, and those schools have every intention of competing.