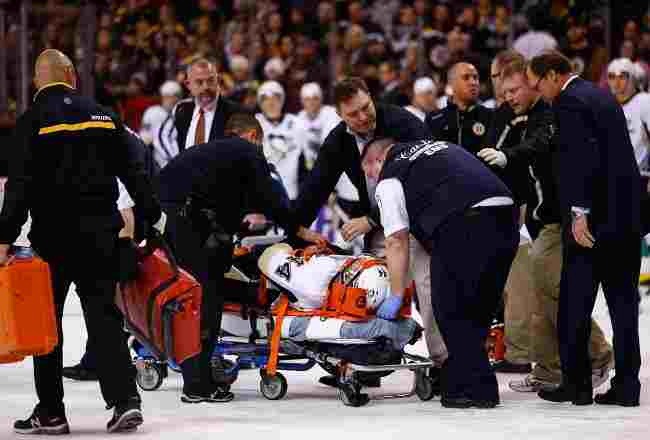 Hi my name is Dave and I am a check-a-holic.

Now that I’ve gotten that off of my chest, I am ready for the healing to begin.

I am a product of the highlight-hit generation; the glass-rattling, tooth-chipping, fans-going-crazy-as-soon-as-the-gloves-drop generation. However, I think we’ve gone a bit too far.

It seems like every few weeks the NHL has to hand down another fine and dole out more discipline for guys committing illegal hits but this one last week (see below) really caught my attention.

Last week Boston’s Shawn Thornton received a 15-game suspension (losing roughly $84-thousand in salary) because of an illegal hit on Pittsburgh’s Brooks Orpik, but calling it a “hit” isn’t really all that telling. It was more of an on-ice mugging witnessed by 20-thousand people. After a play Thornton skated over to Orpik who was jawing with other players, grabbed him from behind and threw him on the ice. He then proceeded to punch him multiple times in the face (think Ralphie from “A Christmas Story” when he finally stands up to Sid Farkus). Orpik, who was knocked unconscious, has not played in a game since as he has been suffering from concussion-like symptoms.

So even I, the self-admitted lover of the big hit, had to ask ‘Is this really hockey?’ Is this what the sport we grew of loving has become, nothing more than an avenue for fisticuffs and public muggings? Thankfully, I believe this is not the case but I think enough is enough.

Thornton apologized by his locker soon after, telling NESN.com, “It wasn’t my intention for that outcome. I know Brooksie, I’ve gotten to know him over the past several years. I got to skate with him during the lockout. I texted him a couple of times. I feel awful.”

Man, if that’s how he treats a guy that he “knows”, I’m glad I am not on his holiday card list. By the way he can’t possibly feel that badly since he and the NHLPA are appealing the penalty.

What Thornton did was not only illegal, it was immoral. There is no place in the game for garbage like that. A premeditated play like that is what gives hockey a bad name. And if Gary Bettman overrules the punishment handed down by Brendan Shanahan it will be a horrible message to send: You can get away with anything if you argue it.

I know the code of hockey. If your guy gets hit you go after the guy who did it. I was even guilty of it more than a few times when I played as a kid. But simply hiding behind that makes it even worse in my mind. That one could even use the guise of revenge for an earlier hit as a reason to attack someone minutes later when they are not expecting it is nothing more than being a hit-man.

Now some of you might be thinking: This is hockey! When we were younger guys were much rougher and equipment wasn’t as protective and we all survived! Well the game of hockey (and all contact sports really) is at a crossroads. We know now that severe damage can be done from hits to the head, punches to the face and hitting your head on the ice. Which is why players, fans and the league should be so much more cognizant of it. Players have got to learn to turn off the anger and realize that there is a person on the other side of that hit. That just “losing it” on a guy is no longer acceptable because the damage you can do will last long after the game is done. And the league needs to “help” them understand which is what Shanahan did by suspending Thornton 15 games.

In all of this I have tried to search for a reason that more things like this have happened. I don’t think it’s how players are taught, I don’t think it’s because of TV, heck I don’t even think its too many energy drinks! It’s simply a culture that has to change. Players should show some restraint and the more they do, the less instances like that will happen. But if they get away with it, I fear the actions will only get worse and the consequences could be dire.

None of us want the game to change. We hope that it will always be played in a manner that it captures our excitement forever. But this senseless violence has to stop. It adds nothing to the game, or our enjoyment of it. It only hurts the players we enjoy watching at EVERY level and it gives hockey a bad name.

I’ve always loved the big hits, but I guess part of the healing is knowing when things have gone too far.