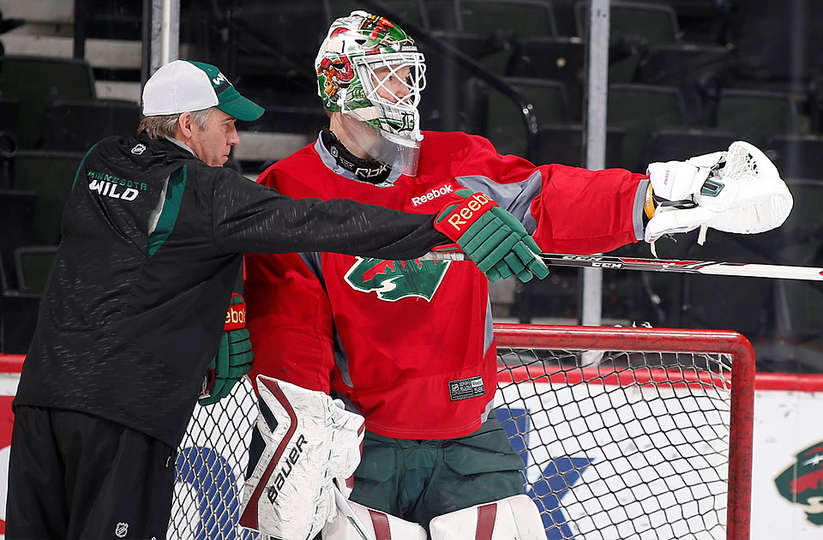 Their relationship lacks any kind of excitement and that’s just the way Wild Goalie Devan Dubnyk and Wild goalie coach Bob Mason like it.

“He’s such a laid back guy,” says Dubnyk. “Just having that calm person to talk to about the game has been great.”

“I don’t get too riled up,” says Mason. “You just have to take what the game gives you.”

A mid-season desperation move by Chuck Fletcher and the Wild gave them to each other; a relationship that’s been noticeably better for Dubnyk’s career. But not just in numbers — which are some of the best in years — but rather it’s been Mason’s ability to center him no matter what happens.

“He allows you to be calm and feel calm,” says Dubnyk. “You know that if you’re a little excited after a play then he helps get the heart rate down a little bit and that’s important to have.”

The combination of Mason and Dubnyk has helped put the journeyman goaltender firmly into the conversation for the Hart Trophy for the league’s most valuable player. You could argue that no one has been more valuable to their team than Dubnyk has been to the Wild.

Just look at the record before the trade deadline and after and you’ll agree. But what’s been the most exciting to watch, in my mind, is a goalie who is getting his confidence back.

When Dubnyk came over from Arizona he was thought of, by many, as washed up. On his fourth team in three years, including an 8-game AHL stint in which he went 2-5, he was four seasons away from his best numbers in Edmonton and he was only trending downward.

Dubnyk took a red-eye flight to Buffalo to meet the Wild after being traded. Mason recalls a very short conversation that day.

Dubnyk won that game and went onto win so many more. In that time he got more confident. His team played better in front of him, making it their mission to not let him see too many shots. In turn the ones he did see, he deftly turned aside.

All the while the legend of ‘Duby’ grew. Fans scream his name in the arena so loudly that you’d think they are booing the hometown team. A Canadian all sports network had a comedian write a song about him:

He literally went from zero to hero in a matter of three months. And when asked about his new found stardom Dubnyk turned aside the praise as well as a straight on slap shot from the blue line.

Devan Dubnyk is still the same guy he’s always been, but someone finally believed in him.

Mason has been with the Wild for 13 seasons and worked with a number of different goalies. In his time with the Wild Josh Harding led the NHL in goals-against average and save percentage in 2013-14, while goaltenders Niklas Backstrom and Dwayne Roloson both represented Minnesota in the NHL All-Star Game.

Mason is a student of the game, which is why he knew about Dubnyk even before he got to Minnesota through scouting him and working with him at camps. So when the Wild traded for him in January he knew two indisputable facts, he was coachable and had plenty to offer the franchise.

“What always stuck out in my mind was that he had that nice little run with Edmonton,” Mason told me on an off day between games 1 and 2 in St. Louis. “He never really sustained it there, probably ups and downs of the team. But I liked his size I liked his skill set.”

The Wild have liked it as well and his 27 regular season wins which helped them to where they are now — where Mason had an idea Dubnyk could take them.

“He’s certainly playing for good hockey for us,” says Mason. “But I think we’re one of the better teams he’s played behind though and that’s a nice combination to have.”

A nice combination for all sides involved.